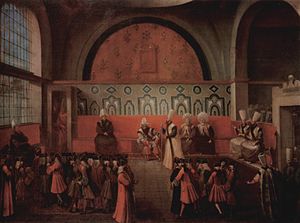 The Grand Vizier giving an audience "under the dome"

In the Ottoman Empire, the Grand Vizier (Turkish: Sadrazam) was the prime minister of the Ottoman sultan, with absolute power of attorney and, in principle, dismissible only by the sultan himself.[1] He held the imperial seal and could convene all other viziers to attend to affairs of the state; the viziers in conference were called "Kubbealtı viziers" in reference to their meeting place, the Kubbealtı ('under the dome') in Topkapı Palace. His offices were located at the Sublime Porte.

Grand Viziers of the Ottoman Empire 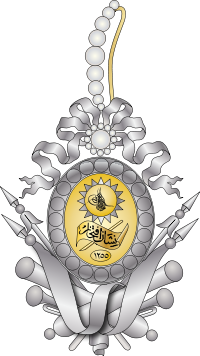 Seal of the Ottoman Grand Vizier

The term “vizier” was originally a denomination used by the Abbasid Dynasty in the 8th century AD. This position then came to the Ottomans in the early 14th century by way of the Seljuks of Anatolia.

During the nascent phases of the Ottoman state, "vizier" was the only title used. The first of these Ottoman viziers who was titled "Grand Vizier" was Çandarlı Halil Pasha the Elder. The purpose in instituting the title "Grand Vizier" was to distinguish the holder of the Sultan's seal from other viziers. The initially more frequently used title of vezir-i âzam (وزیر اعظم) was gradually replaced by sadrazam (صدر اعظم), both meaning "grand vizier" in practice. Throughout Ottoman history, the grand viziers have also been termed sadr-ı âlî (صدر عالی, "high vizier"), vekil-i mutlak (وكیل مطلق, "absolute attorney"), sâhib-i devlet (صاحب دولت, "holder of the State""), serdar-ı ekrem (سردار اكرم), serdar-ı azam (سردار اعظم) and zât-ı âsafî (ذات آصفی, "vizieral person").

Çandarlı Halil Pasha the Elder reformed the role of the vizier in several ways. Several before him held an equivalent but differently named office; he was the first who held the position of “Grand Vizier”, during the reign of Sultan Murad I. He was the first advisor with a military background – his forerunners had come from a more scholarly class of men.[2] It is also significant that he was the first of a political family that, at the time, rivaled the Ottoman dynasty itself. Several of Çandarlı Halil Pasha the Elder’s kin went on to hold the office of Grand Vizier in the decades following his death.

Çandarlı Halil Pasha the Younger, the grandson of Pasha the Elder, was also highly influential in shaping the role of the Grand Vizier. During the reign of Mehmed II, the Younger opposed the siege of Constantinople and the ongoing hostilities with Christians. Two days after the siege was won by Mehmed II, the Younger was executed for his opposition. After his death, the position of Grand Vizier was chosen nearly exclusively from the kul system; often, the men chosen had a Byzantine or Balkan background. This was usually a political move, designed to appease powerful European factions to Ottoman supremacy.[3]

Grand Viziers gained immense political supremacy in the later days of the Ottoman Empire. Power was centralized in the position of the Grand Vizier during the Köprülü era. Köprülü Mehmed Pasha was a powerful political figure during the reign of Mehmed IV, and was appointed to the office of Grand Vizier in 1656. He consolidated power within the position and sent the Sultan away from the city on hunting trips, thus stopping Mehmed’s direct management over the state. Next, he forcibly removed any officers suspected of corruption; those who did not leave were executed. He also conducted campaigns against Venice and the Hapsburgs, as well as quelling rebellions in Anatolia. On his deathbed five years later, he convinced Mehmed to appoint his son (Köprülü Fazıl Ahmed Pasha) as the next Grand Vizier, thus securing his dynasty a position of supreme power in the Empire. It was during the Köprülü era that the Ottoman Empire reached its largest geographic expansion across Europe, Asia Minor, and Africa.[4]

In Ottoman legal theory, the Sultan was supposed to conduct affairs of state exclusively via the Grand Vizier, but in reality this arrangement was often circumvented. As the Ottomanist Colin Imber writes, the Sultan "had closer contact with the pages of the Privy Chamber, the Kapi Agha, the Kizlar Agha or with other courtiers than he did with the Grand Vizier, and these too could petition the Sultan on their own or somebody else’s behalf. He might, too, be more inclined to take the advice of his mother, a concubine or the head gardener at the helm of the royal barge than of the Grand Vizier".[5]

After the Tanzimat period of the Ottoman Empire in the 19th century, the grand viziers came to assume a role more like that of the prime ministers of contemporary Western monarchies.

Grand Viziers of the Mughal Empire

Sadullah Khan, Grand Vizier of the Mughal Empire during the reign of Shah Jahan.

During the reign of Aurangzeb, Ali Quli Khan was bestowed this title.

Later general Zulfiqar Khan Nusrat Jung became Grand Vizier, his fame as one of the most greatest military leaders in the Mughal Empire would lead to his downfall when rogue generals executed him in a power struggle after the death of Aurangzeb.

In 1718, Balaji Vishwanath leader of the antagonistic Maratha Confederacy secured the right to collect Chauth and Sardeshmukhi from the Subahs of the Mughal Empire by the rogue Vizier Syed Hassan Ali Khan Barha, whose grip over the Deccan had substantially weakened.[6] Asaf Jah I, however refused to grant Chauth to the Maratha Confederacy during its onset in 1718 and in 1721 after the nobility of the Mughal Empire had the two Sayyid Brothers assassinated. After becoming the Grand Vizier he advised the emperor Muhammad Shah to assist the collapsing Safavid dynasty (who had requested aid), when the ruler refused Asaf Jah I resigned and turned his attention to securing the Deccan from the Maratha Confederacy in the year 1722. However the Marathas had already expanded up to the Narmada River and entrenched themselves in that region thereafter. Baji Rao I later instigated war by collect Chauth in 1723, and trying to expand Maratha rule in the Deccan and beyond causing the outbreak of the Later Mughal-Maratha Wars.

Qamaruddin Khan was handpicked to be the Grand Vizier of the Mughal Empire, by Asaf Jah I, he successfully repelled Baji Rao I during the Battle of Delhi (1737). He negotiated peace after the occupation of the Mughal Empire by the forces of Nader Shah. He fell in battle after being struck by a stray artillery shell, by Afghan marauders in the year 1749.

Shuja-ud-Daula served as the leading Grand Vizier of the Mughal Empire during the Third Battle of Panipat, he was also the Nawab of Awadh, and a loyal ally of Shah Alam II.