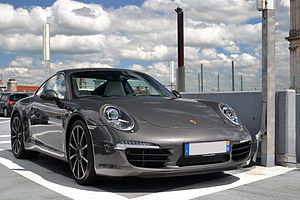 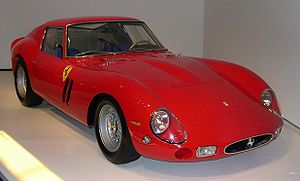 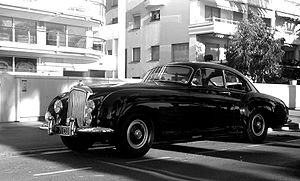 A grand tourer (Italian: gran turismo) (GT) is a performance and luxury automobile capable of high speed or spirited long-distance driving. The most common format is a two-door coupé with either a two-seat or a 2+2 arrangement.

The term derives from the Italian phrase gran turismo, a tribute to the tradition of the grand tour, used to represent automobiles regarded as grand tourers, able to make long-distance, high-speed journeys in both comfort and style. The English translation is grand touring. 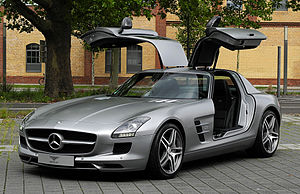 The Grand Tourer, Grand Turismo, Grand Routiere, or GT terms are the most misused and abused terms in motoring.[1] Although "widely abused initials in the auto industry", the grand touring designation generally "means motoring at speed, in style, safety, and comfort."[2] "Purists define "Gran Turismo" as the enjoyment, excitement and comfort of open-road touring.[3] In comparison, sports cars (also "much abused and confused term") are typically more "crude" compared to "sophisticated Grand Touring machinery."[4] However, the popularity of using GT for marketing purposes has meant that the "much misused term, eventually signifying no more than a slightly tuned version of a family car with trendy wheels and a go-faster stripe on the side."[5]

According to one author, "the ideal is of a car with the ability to cross a continent at speed and in comfort yet provide driving thrills when demanded" and it should exhibit the following:[1]

Grand tourers emphasize comfort and handling over straight-out high performance or spartan accommodations. Historically, most GTs have been front-engined with rear-wheel drive, which creates more space for the cabin than mid-mounted engine layouts. Softer suspensions, greater storage, and more luxurious appointments add to their driving appeal. 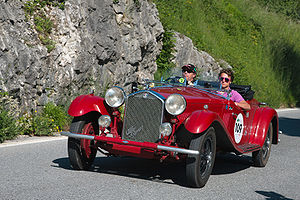 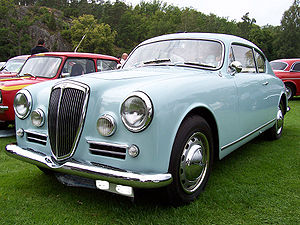 The GT abbreviation, so popular across the automotive industry, traces to the Italian tradition of referring to their luxury performance cars as gran turismo. Manufacturers such as Alfa Romeo,[6] Ferrari, and Lancia started to use the term during the late-1920s.

Among the many variations of GT are: 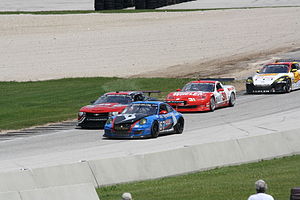 The term grand tourer, or gran turismo, can also be synonymous with race versions of sports cars (even those not fitting the definition provided above) that take part in sports car racing, including endurance races like the 24 Hours of Le Mans, 12 Hours of Sebring, Petit Le Mans, Mille Miglia, Targa Florio, and Carrera Panamericana. Examples of race grand tourers include:

In some professional motorsport classifications, such as the Grand Touring categories promoted by the FIA, the GT car is defined as an open or closed automobile with no more than one door on each side and at least two seats, one on each side of the longitudinal centre line of the car; these two seats must be crossed by the same transversal plane. This car must be legal to drive on the open road, and adapted for racing on circuits or closed courses.

GT cars are divided, from most powerful to least powerful, into GT1 (formerly GTS and GT) and GT2 (formerly GT and N-GT) in most championships, although the ACO has canceled further GT1 involvement not only in the 24 Hours of Le Mans but in every other Le Mans Series (LMS, ALMS, ILMC, JLMC) sanctioned by the ACO. This only left room for GT1 cars to race in the FIA GT1 World Championship, while in turn GT2 cars only competed in ACO sanctioned event due to the absence of the FIA GT2 European Championship. GT3 and GT4 class cars also have their own championships, as well as being eligible for several National GT championships.

A true grand tourer is a luxury or performance vehicle intended for long-distance spirited travel in both comfort and style. The placement of "GT" on an automobile does not necessarily classify it as a "grand tourer." Some examples include: