Grandee (/ɡrənˈdiː/; Spanish: Grande Spanish: [ˈɡɾande]; Portuguese: Grande Portuguese: [ˈɡɾɐ̃dɨ]) is a high aristocratic title used by the Spanish nobility, Portuguese nobility and Brazilian nobility. The rank was a rough equivalent of the Peerage of France, and carried — increasingly as time went on — certain personal privileges, but the Grandees had no powers as a group.

It can refer to other people of a somewhat comparable, exalted position, roughly synonymous with magnate; a formal upper level of the nobility (especially when it carried the right to a parliamentary seat). By extension the term can refer informally to any important person of high status, particularly a wealthy, land owning, long-time resident in an area.

The term is often used in the United Kingdom to refer to influential members of long standing in the Labour Party, Conservative Party, and Liberal Democrats.[1][2] For the 17th-century English usage, see Grandee (New Model Army) below. 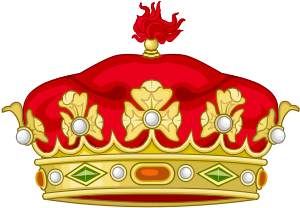 Coronet of a Grandee of Spain

Spanish nobles are classified either as Grandes de España (or simply, 'grandees'), or as Títulos del Reino (titled nobles).

The dignity of grandee ("grand one") was apparently originally assumed by the most important nobles, to distinguish them from the mass of the ricoshombres (wealthy men) of the Hidalgo, as a 'grand' señor (lord) of the realm. It was, as John Selden pointed out, not a general term denoting a class, but 'an additional individual dignity not only to all Dukes, but to some Marquesses and Condes also'.[3] The titles, including and above count, were seldom given or passed hereditarily in Castile or Aragon until late in the Middle Ages—in contrast to more developed forms of feudalism in France or other parts of Europe—and remained more of a royal official's post until the 14th century. Being a grandee formerly implied certain privileges, notably that of the ancient uses of remaining covered or seated in the presence of royalty. The later grandees had also certain more important rights: e.g., freedom from taxation; immunity from arrest—save at the King's express command—as they were the major justice officers in their regions; and even, in certain cases, the right to renounce their allegiance and to make war on the king.

In the late 1470s, King Ferdinand II and Queen Isabella I were the first to break the grandee power of the territorial nobles. In the 16th century, limitations on the number of grandees were first established by King Charles I (later Charles V, Holy Roman Emperor), who reserved to the crown the right to bestow the title of grandee.

The Grandes de España (Grandees of Spain) were further divided into three classes:

All grandees were addressed by the king as mi Primo (my cousin), whereas ordinary nobles were only qualified as mi Pariente (my kinsman). The title could be given to foreigners, and the memoirist Louis de Rouvroy, duc de Saint-Simon was extremely proud of his, received at the end of his embassy to Spain for Louis XIV.

The rank of grandee was abolished under the Napoleonic king Joseph Bonaparte, but was revived in 1834, when by Estatuto real grandees were given precedence in the Spanish Chamber of Peers.

Nowadays, grandees of all three ranks are deemed to share the status 'of the first class'. The designation is purely titular, implying neither privilege nor power. An individual is a grandee if he or she holds a Grandeza de España (grandeeship), regardless of possession of a title of nobility. Normally, each grandeza is granted along with a title, although this was not always the case. Furthermore, a Grandeza de España is normally awarded along with every ducal title.

A grandee of any rank outranks a non-grandee (except official members of the Spanish Royal Family), even if that non-grandee possesses a hereditary title (titulo) of a higher grade than that of the grandee. Thus, a baron-grandee would outrank a non-grandee marquis, making the grandeza an official hereditary rank rather than a title of nobility. Since 1987, children of an infante of Spain, traditionally members of the royal family, are entitled to the rank and style of a grandee, but are not grandees unless a title with a grandeza attached is conferred upon them by the sovereign.[4]

Grandees and their consorts are entitled to the honorific style of 'The Most Excellent Lord/Lady' or 'His/Her Excellency', and they are addressed as Primo (Cousin) by the King.

Both Portuguese and Brazilian peerages formerly also used the term Grande ("grandee"), to designate a higher rank of noblemen. The Brazilian system, for instance, automatically deemed dukes, marquises and counts (as well as archbishops and bishops) Grandes do Império ("Grandees of the Empire", or in a literal translation "Great Ones of the Empire"). Viscounts and barons could be ennobled with or without grandeza ("grandeeship", literally "greatness").

In Brazil, grandeeship, as well as the titled nobility itself, was not hereditary.

Grandees were allowed to keep their heads covered in the presence of the king or the emperor; only to be arrested by permission of the monarch (in Portugal); and allowed display their coat of arms by the front door of the home, on vehicles, or at the grave. The abolition of monarchy in each country extinguished the system, although it remained in use by Portuguese aristocracy.

In the English Civil War, senior officers from the landed gentry, in the New Model Army, who opposed the Levellers, were informally termed the Grandees.[5]

After the defeat of the King Charles I of England in the civil war, there were a series of debates and confrontations between the Levellers, whose members were known as 'Agitators', and the 'Grandees' such as Sir Thomas Fairfax, Oliver Cromwell and Henry Ireton, who opposed the Agitators' more radical proposals. The disagreements were aired publicly at the Putney Debates, which started in late October 1647 and lasted for several weeks.[6]