From Infogalactic: the planetary knowledge core
Jump to: navigation, search
This article is about the Palace in Valletta, Malta. For the palace in Rhodes, see Palace of the Grand Master of the Knights of Rhodes. 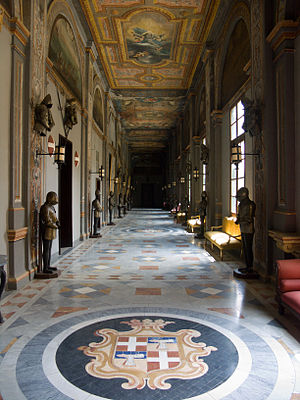 The Grandmaster's Palace was originally built in 1569, as the palace of Eustachio del Monte. It was purchased by Grand Master Jean de la Cassière in the 1570s, and was enlarged into his own residence by the architect Girolamo Cassar.[3] It was further enlarged and embellished by successive Grand Masters, and its present configuration dates back to around the mid-18th century. In the 1770s, traveller Patrick Brydone noted that:[4]

the Grand Master (who studies conveniency more than magnificence) is more comfortably and commodiously, lodged than any prince in Europe, the King of Sardenia perhaps only excepted.

In 1800, Malta was taken over by Britain, and the island eventually became a crown colony. The Grandmaster's Palace became the official residence of the Governor of Malta, and it became known as the Governor's Palace.[5]

The palace's Tapestry Hall became the meeting place of the Parliament of Malta in 1921, and it continued to serve as such until 1976, when the parliament moved in the former armoury, also within the palace. The House of Representatives moved out of the Grandmaster's Palace to the purpose-built Parliament House on 4 May 2015.[6]

The palace is listed on the National Inventory of the Cultural Property of the Maltese Islands.[3] 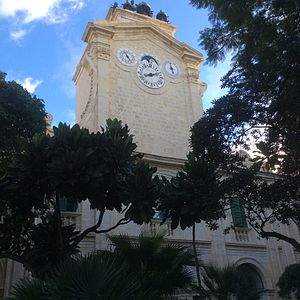 Courtyard clock tower is visible from nearby buildings in Valletta

The Grandmaster's Palace was originally built with Mannerist characteristics typical of its architect Girolamo Cassar.[7] Its façade is simple but severe, and is characterized by two large doorways and long wooden balconies at each corner. The balconies and doorways did not form part of the original palace, but were later additions.[3] Apart from the two entrances in St. George's Square, there is a third entrance from Piazza Regina (Republic Square) just west of the National Library.

The palace is built around two courtyards, one of which is dominated by a statue of Neptune. The entrance to the state rooms is in the Neptune Courtyard via a spiral staircase. The ceiling of this entrance was painted by Nicolau Nasoni in 1724.[3] 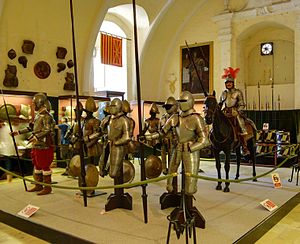 The Armoury, which houses one of the finest collections of weapons of the period of the Knights of Malta, runs the width of the back of the palace. Spears, swords, shields, heavy armour and other weapons are on display. It contains only a fraction of its original splendour due to the "organised robbery of art treasure and historic treasures"[8] during the French occupation of Malta in 1798. Despite this, it still contains material of European origin and even some captured Ottoman weaponry. Examples include parade armour of various Grand Masters including Jean Parisot de Valette and Alof de Wignacourt, and Dragut's own sword. 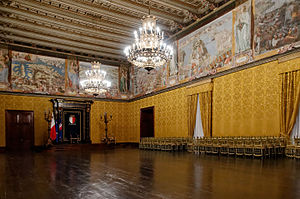 The Throne Room, originally known as the Supreme Council Hall (Sala del Maggior Consiglio) was built during the reign of Grandmaster Jean de la Cassière. It was used by successive Grandmasters to host ambassadors and visiting high ranking dignitaries. During the British administration it became known as the Hall of Saint Michael and Saint George after the Order of St Michael and St George which was founded in 1818 in Malta and the Ionian Islands. It is currently used for state functions held by the President of Malta.

The cycle of wall paintings decorating the upper part of the hall are the work Matteo Perez d'Aleccio and represent various episodes of the Great Siege of Malta. The coat-of-arms of Grand Master Jean de Valette on the wall recess behind the minstrels gallery was painted by Giuseppe Calì.

In 1818, the British transformed this hall by completely covering the walls with neo-classical architectural features designed by Lieutenant-Colonel George Whitmore. These were removed in the early 20th century. The minstrel's gallery is thought to have been relocated to this hall from the palace chapel which was probably its original location. Of particular interest is the original coffered ceiling and the late 18th century-style chandeliers.

The palace is supposedly haunted by a ghost in the form of a large cat. The ghost was seen by an English lady, and it jumped through a window before vanishing.[9]