From Infogalactic: the planetary knowledge core
Jump to: navigation, search
For other uses, see Granita (disambiguation).

Granita (pronounced [ɡraˈniːta]; in Italian also granita siciliana [ɡraˈniːta sitʃiˈljaːna]) is a semi-frozen dessert made from sugar, water and various flavorings. Originally from Sicily, it is available all over Italy in somewhat different forms. It is related to sorbet and Italian ice; however, in most of Sicily, it has a coarser, more crystalline texture. Food writer Jeffrey Steingarten says that "the desired texture seems to vary from city to city" on the island; on the west coast and in Palermo, it is at its chunkiest, and in the east it is nearly as smooth as sorbet.[1] This is largely the result of different freezing techniques: the smoother types are produced in a gelato machine, while the coarser varieties are frozen with only occasional agitation, then scraped or shaved to produce separated crystals. Although its texture varies from coarse to smooth, it is always different from the one of an ice cream which is creamier, and from the one of a sorbet, which is more compact; this makes granita distinct and unique. 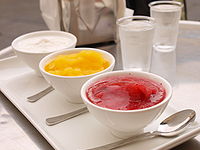 Common and traditional flavoring ingredients include lemon juice, mandarin oranges, jasmine, coffee, almonds, mint, and when in season wild strawberries and black mulberries. Chocolate granitas have a tradition in the city of Catania and, according to Steingarten, nowhere else in Sicily. The nuances of the Sicilian ingredients are important to the flavor of the finished granita: Sicilian lemons are a less acidic, more floral variety similar to Meyer lemons, while the almonds used contain some number of bitter almonds, crucial to the signature almond flavor.

Granita with coffee is very common in the city of Messina, while granita with almonds is popular in the city of Catania. Granita in combination with a yeast pastry called brioche is a common breakfast in summer time (the Sicilian brioche is generally flatter and wider than the French version).

Granita is often found served as a slush-type drink rather than a dessert, in a paper or plastic cup with a plastic lid and a straw (often a spoon straw).[citation needed]

Granita, made with savory ingredients or less sugar than the dessert, is often served between courses of a meal as a palate cleanser.