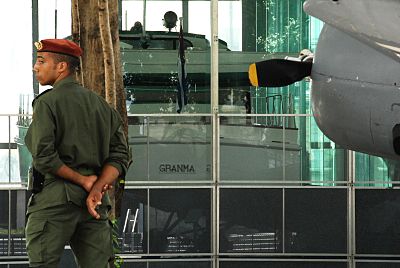 Granma is the yacht that was used to transport 82 fighters of the Cuban Revolution from Mexico to Cuba in November 1956 for the purpose of overthrowing the regime of Fulgencio Batista. The 60-foot (18 m) diesel-powered cabin cruiser was built in 1943 and designed to accommodate 12 people. "Granma", in English, is an affectionate term for a grandmother; the yacht is said to have been named for the original owner's grandmother.[1]

Role in the Cuban revolution

The route of the Granma from Tuxpan to Playa Las Coloradas

The yacht was purchased on 10 October 1956 for MX$50,000 (US$15,000) from the United States-based Schuylkill Products Company, Inc. by a Mexican citizen—said to be Mexico City gun dealer Antonio "The Friend" del Conde[2]—secretly representing Fidel Castro. Castro's 26th of July Movement had attempted to purchase a Catalina flying boat or a US naval crash rescue boat for the purpose of crossing the Gulf of Mexico to Cuba, but their efforts had been thwarted by lack of funds. The money to purchase the Granma had been raised in the US state of Florida by former President of Cuba Carlos Prío Socarrás.[3]

Shortly after midnight on 25 November 1956 in the Mexican port of Tuxpan, Veracruz, the Granma was surreptitiously boarded by 82 members of the 26th of July movement including their leader, Fidel Castro, his brother, Raúl Castro, Che Guevara, and Camilo Cienfuegos. The group——who later came to be known collectively as los expedicionarios del yate Granma (the Granma yacht expeditioners)——then set out from Tuxpan at 2 a.m.[4] After a series of vicissitudes and misadventures, including diminishing supplies, sea-sickness, and the near-foundering of their heavily laden and leaking craft, they disembarked on 2 December on the Playa Las Coloradas, municipality of Niquero, in modern Granma Province (after the vessel), formerly part of the larger Oriente Province. The Granma was piloted by Norberto Collado Abreu, a Cuban Navy veteran and ally of Castro.[5] The location was chosen to emulate the voyage of national hero José Martí, who had landed in the same region 61 years earlier during the wars of independence from Spanish colonial rule.

"We reached solid ground, lost, stumbling along like so many shadows or ghosts marching in response to some obscure psychic impulse. We had been through seven days of constant hunger and sickness during the sea crossing, topped by three still more terrible days on land. Exactly 10 days after our departure from Mexico, during the early morning hours of December 5, following a night-long march interrupted by fainting and frequent rest periods, we reached a spot paradoxically known as Alegría de Pío (Rejoicing of the Pious)". - Che Guevara [6]

Soon after the revolutionary forces triumphed on 1 January 1959, the cabin cruiser was transferred to Havana Bay. Norberto Collado Abreu, who had served as main helmsman for the 1956 voyage,[5] received the job of guarding and preserving the yacht.

Since 1976 the yacht has been on permanent display in a glass enclosure at the Granma Memorial adjacent to the Museum of the Revolution in Havana. A portion of old Oriente Province, where the expedition made landfall, was renamed Granma Province in honor of the vessel. UNESCO has declared the Landing of the Granma National Park - established at the location (Playa Las Coloradas) - a World Heritage Site for its natural habitat.

Cuba celebrates 2 December as the "Day of the Cuban Armed Forces",[7] and a replica has also been paraded at state functions to commemorate the original voyage. In further tribute, the official newspaper of the Central Committee of the Cuban Communist Party has been called Granma. The name of the vessel became an icon for Cuban communism. Although the name is sometimes described as having been misspelled, the Shorter Oxford English Dictionary lists granma as a variant of grandma.