From Infogalactic: the planetary knowledge core
Jump to: navigation, search
For the street in San Francisco, California, see Grant Avenue.

Grant Street is the main government and business corridor in Pittsburgh. It is home to the global headquarters of Mellon Financial, U.S. Steel, Koppers Chemicals, Federated Investors, and Oxford Development. It also is home to the seat of Allegheny County, City of Pittsburgh and the regional Federal Government offices. It is part of the Pittsburgh Central Downtown Historic District. 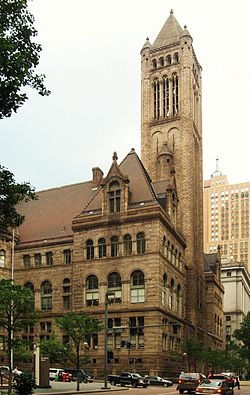 Note the darker stone at the base of the Allegheny County Courthouse; this used to be below ground before the removal of Grant Hill.

Grant Street was named after British Major General James Grant, who was defeated by the French at that location during the French and Indian War.[1] The street's location on "Grant's Hill" strangled growth on downtown Pittsburgh, leading to several attempts in 1836 and 1849 to regrade the area to remove the hill.[2] The successful removal of the hill in 1912 cost $800,000 ($19.6 million in 2021 dollars), plus $2.5 million in reimbursement costs for property damaged by the project ($61.3 million in 2021 dollars).[2] For example, the project removed 16 feet of hill near the Allegheny County Courthouse, meaning that the former basement became the modern ground level.[2][3] The extreme south end of Grant Street—near the Monongahela River and Boulevard of the Allies intersection—was home to Pittsburgh's Chinatown from the 1880s until the 1950s.[4]

An extensive six-year $15.3 million resurfacing and redesign of Grant Street was completed in August, 1990.[5][6]

The American Planning Association named Grant Street one of its 10 Great Streets for 2012, describing it as "Pittsburgh's finest collection of historic buildings and modern skyscrapers, buildings that tell the stories of 20th century aristocrats and architects who shaped the city into an industrial and banking empire."[1]

Its importance to the city is because of its status as the "seat of financial, governmental and legal power" and its "striking architecture".[7] It is the "corporate and government heartbeat" of the city.[8]

After the death of Pittsburgh Mayor Richard Caliguiri, his successor Sophie Masloff pursued changing the name of Grant Street to Richard S. Caliguri Boulevard[8] However, resistance to changing the historic street name, even for the beloved deceased mayor, halted that effort.[11]

The street stretches for close to 10 blocks on the eastern boundary of Downtown Pittsburgh. Many of Pittsburgh's tallest skyscrapers are on Grant Street.