Vitis (grapevines) is a genus of 79 accepted species[6] of vining plants in the flowering plant family Vitaceae. The genus is made up of species predominantly from the Northern hemisphere. It is economically important as the source of grapes, both for direct consumption of the fruit and for fermentation to produce wine. The study and cultivation of grapevines is called viticulture.

Most Vitis varieties are wind-pollinated with hermaphroditic flowers containing both male and female reproductive structures. These flowers are grouped in bunches called inflorescences. In many species, such as Vitis vinifera, each successfully pollinated flower becomes a grape berry with the inflorescence turning into a cluster of grapes. While the flowers of the grapevines are usually very small, the berries are often big and brightly colored with sweet flavors that attract birds and other animals to disperse the seeds contained within the berries.[7]

Grapevines usually only produce fruit on shoots that came from buds that were developed during the previous growing season. In viticulture, this is one of the principles behind pruning the previous year's growth (or "One year old wood") that includes shoots that have turned hard and woody during the winter (after harvest in commercial viticulture). These vines will be pruned either into a cane which will support 8 to 15 buds or to a smaller spur which holds 2 to 3 buds.[7] 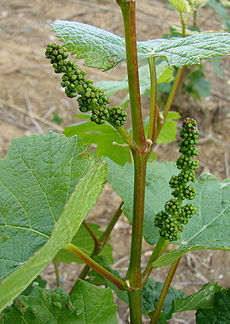 Flower buds are formed late in the growing season and overwinter for blooming in spring of the next year. They produce leaf-opposed cymes . Vitis is distinguished from other genera of Vitaceae by having petals which remain joined at the tip and detach from the base to fall together as a calyptra or 'cap'. The flowers are mostly bisexual,[8]:143 pentamerous, with a hypogynous disk. The calyx is greatly reduced or nonexistent in most species and the petals are joined together at the tip into one unit but separated at the base. The fruit is a berry, ovoid in shape and juicy, with a two-celled ovary each containing two ovules, thus normally producing four seeds per flower (or fewer by way of aborted embryos).[9]

Other parts of the vine include the tendrils which are leaf-opposed, branched in Vitis vinifera, and are used to support the climbing plant by twining onto surrounding structures such as branches or the trellising of a vine-training system.

In the wild, all species of Vitis are normally dioecious, but under domestication, variants with perfect flowers appear to have been selected. 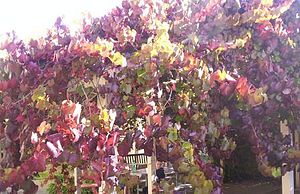 Most Vitis species are found in the temperate regions of the Northern Hemisphere in North America and Asia with a few in the tropics. The wine grape Vitis vinifera originated in southern Europe and southwestern Asia. The species occur in widely different geographical areas and show a great diversity of form.

Their growth makes leaf collection challenging and polymorphic leaves make identification of species difficult. Mature grapevines can grow up to 48 cm in diameter at breast height and reach the upper canopy of trees more than 35 m in height (Everhart 2010, PDF)

Many species are sufficiently closely related to allow easy interbreeding and the resultant interspecific hybrids are invariably fertile and vigorous. Thus the concept of a species is less well defined and more likely represents the identification of different ecotypes of Vitis that have evolved in distinct geographical and environmental circumstances.

The exact number of species is not certain, with species in Asia in particular being poorly defined. Estimates range from 40 to more than 60.[11] Some of the more notable include:

Hybrid grapes also exist, and these are primarily crosses between V. vinifera and one or more of V. labrusca, V. riparia or V. aestivalis. Hybrids tend to be less susceptible to frost and disease (notably phylloxera), but wine from some hybrids may have a little of the characteristic "foxy" taste of V. labrusca.

The fruit of several Vitis species are grown commercially for consumption as fresh grapes and for fermentation into wine. Vitis vinifera is the most important such species.

The leaves of several species of grapevine are edible and are used in the production of dolmades and Vietnamese lot leaves. 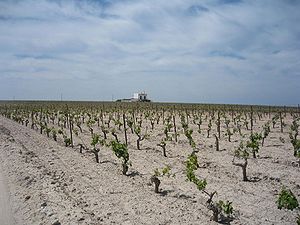 Vitis for producing Sherry at Jerez

According to the "Food and Agriculture Organization" (FAO), 75,866 square kilometres of the world is dedicated to grapes. Approximately 71% of world grape production is used for wine, 27% as fresh fruit, and 2% as dried fruit. A portion of grape production goes to producing grape juice to be used as a sweetener for fruits canned "with no added sugar" and "100% natural". The area dedicated to vineyards is increasing by about 2% per year.

The following list of top wine-producers shows the corresponding areas dedicated to grapes for wine making:

Grapevines are widely cultivated by gardeners, and numerous suppliers cater specifically for this trade. The plants are valued for their decorative foliage, often colouring brightly in autumn; their ability to clothe walls, pergolas and arches, thus providing shade; and their fruits, which may be eaten as dessert or provide the basis for homemade wines. Popular varieties include:-

The following varieties, grown primarily for their ornamental qualities, have gained the Royal Horticultural Society's Award of Garden Merit:- 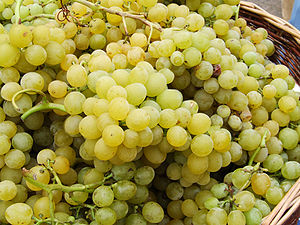 Phylloxera is an American root aphid that devastated V. vinifera vineyards in Europe when accidentally introduced in the late 19th century. Attempts were made to breed in resistance from American species, but many winemakers didn't like the unusual flavour profile of the hybrid vines. Fortunately, V. vinifera grafts readily onto rootstocks of the American species, and most commercial production of grapes now relies on such grafts.

The Black vine weevil is another root pest.

Grapevines are used as food plants by the larvae of some Lepidoptera species - see list of Lepidoptera that feed on grapevines.

The grapevine (typically Vitis vinifera) has been used as a symbol since ancient times. In Greek mythology, Dionysus (called Bacchus by the Romans) was god of the vintage and, therefore, a grapevine with bunches of the fruit are among his attributes. His attendants at the Bacchanalian festivals hence had the vine as an attribute, together with the thyrsus, the latter often entwined with vine branches. For the same reason, the Greek wine cup (cantharos) is commonly decorated with the vine and grapes, wine being drunk as a libation to the god.

In Christian iconography, the vine also frequently appears. It is mentioned several times in the New Testament. We have the parable of the kingdom of heaven likened to the father starting to engage laborers for his vineyard. The vine is used as symbol of Jesus Christ based on his own statement, “I am the vine.” In that sense, a vine is placed as sole symbol on the tomb of Constantia, the sister of Constantine the Great, and elsewhere. In Byzantine art, the vine and grapes figure in early mosaics, and on the throne of Maximianus of Ravenna it is used as a decoration.

The vine as symbol of the chosen people is employed several times in the Old Testament. The vine and wheat ear have been frequently used as symbol of the blood and flesh of Christ, hence figuring as symbols (bread and wine) of the Eucharist and are found depicted on ostensories. Often the symbolic vine laden with grapes is found in ecclesiastical decorations with animals biting at the grapes. At times, the vine is used as symbol of temporal blessing.[24]