Graveley is a village and civil parish about four miles east of Hitchin and two miles north of Stevenage in Hertfordshire, England. In 2011 part of the parish became part of the new civil parish designated Great Ashby Community Council.[1] 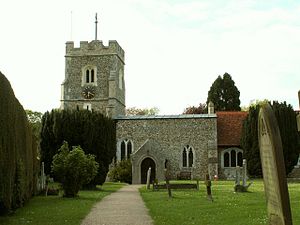 Graveley is built on what used to be known as the Great North Road.

There are a number of attractive cottages and houses, including the George and Dragon pub which has an 18th-century facade of chequered brick. There is another pub, the Wagon & Horses, and at one time there were four, but two have now closed down. Nearby is the site of a former village, Chesfield – all that remain are the ruined walls of its 14th-century church.

According to statistics by the North Hertfordshire District Council, Graveley has a population of 1,731.[2] The village is still growing, with several new houses added in recent years.