From Infogalactic: the planetary knowledge core
Jump to: navigation, search
For the racehorse, see Gravelines (horse).

Gravelines (Dutch: Grevelingen) is a commune in the Nord department in Northern France. It lies at the mouth of the river Aa 15 miles (24 km) southwest of Dunkirk. It was formed in the 12th century around the mouth of a canal built to connect Saint-Omer with the sea. As it was on the western borders of Spanish territory in Flanders it became heavily fortified, some of which still remains.

There is a market in the town square (Place Charles Valentin) on Fridays. The "Arsenal" approached from the town square is home to an extensive and carefully displayed art collection. There are modern bronze statues in the grounds. The town is also home to French basketball club BCM Gravelines.

In the early 12th century, Saint-Omer was an important port in western Flanders. Silting gradually cut it off from the North Sea, resulting in the construction of a canal to the new coast at what is now Gravelines. The name is derived from the Dutch Gravenenga, meaning Count's Canal. The new town became heavily fortified as it guarded the western borders of Spanish territory in Flanders.

Gravelines was taken by Henry le Despenser's English forces during the Norwich Crusade of 1383 and was that year destroyed on his orders as the English retreated towards Calais.[1] 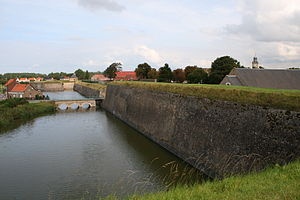 The moat, the drawbridge, the western walls and the bastion of the Mill

There was a famous meeting at Gravelines in 1520, between the Holy Roman Emperor Charles V and Henry VIII of England. There were two battles fought nearby: the first was a land battle in 1558 resulting in a victory by Spanish forces of Lamoral, Count of Egmont over the French under Marshal Paul des Thermes, while the second was a naval attack using fire ships in 1588 launched by England's Royal Navy under Lord Howard against the Spanish Armada at anchor. Gravelines was also the setting for Sir Philip Sidney's failure to deliver the town from Spanish occupation in July 1586, which is described in the anonymous A Discourse of the enterprise of Gravelines.

The town was captured and recaptured several times by the French and Spanish between 1639 and 1658. It was finally annexed to France in the Treaty of the Pyrenees of 1659.

Only in the 19th century did the population become totally French speaking.

On May 24, 1940, during the Fall of France, German Field Marshal Gerd von Rundstedt, commanding Army Group A, ordered his armored divisions to close up the "Canal Line" of Lens-Gravelines, and halt there.

Now the city is mainly known for its nuclear energy plant. 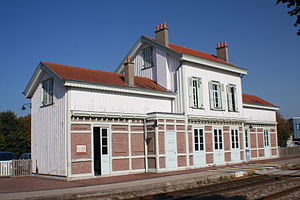