From Infogalactic: the planetary knowledge core
Jump to: navigation, search
Not to be confused with Gravitational anomaly.
For a tv episode with gravity anomalies, see Not What He Seems.

A gravity anomaly is the difference between the observed acceleration of a planet's reaction to gravity and a value predicted from a model. A location with a positive anomaly exhibits more gravity than predicted, while a negative anomaly exhibits a lower value than predicted. The anomaly is the body or effect that causes the deviation from the "ideal" gravity model. Many data corrections must be made to the measured gravity value in order to extract the response of the local anomaly, or local geology, which is typically the goal of applied geophysics.

Gravity and geoid anomalies caused by various crustal and lithospheric thickness changes relative to a reference configuration. All settings are under local isostatic compensation.

Lateral variations in gravity anomalies are related to anomalous density distributions within the Earth. Gravity measures help us to understand the internal structure of the planet. Synthetic calculations show that the gravity anomaly signature of a thickened crust (for example, in orogenic belts produced by continental collision) is negative and larger in absolute value, relative to a case where thickening affects the entire lithosphere.

The Bouguer anomalies usually are negative in the mountains because of isostasy: the rock density of their roots is lower, compared with the surrounding earth's mantle. Typical anomalies in the Central Alps are −150 milligals (−1.5 mm/s²). Rather local anomalies are used in applied geophysics: if they are positive, this may indicate metallic ores. At scales between entire mountain ranges and ore bodies, Bouguer anomalies may indicate rock types. For example, the northeast-southwest trending high across central New Jersey (see figure) represents a graben of Triassic age largely filled with dense basalts. Salt domes are typically expressed in gravity maps as lows, because salt has a low density compared to the rocks the dome intrudes. Anomalies can help to distinguish sedimentary basins whose fill differs in density from that of the surrounding region - see Gravity Anomalies of Britain and Ireland for example.

In geodesy and geophysics, the usual theoretical model is the gravity on the surface of a reference ellipsoid such as WGS84.

To understand the nature of the gravity anomaly due to the subsurface, a number of corrections must be made to the measured gravity value: 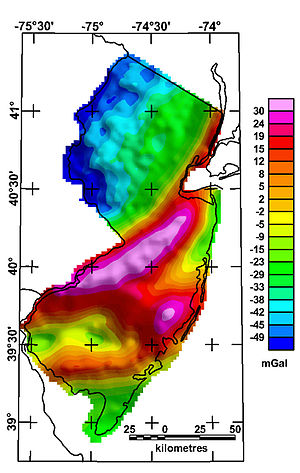 For these reductions, different methods are used:

Large-scale gravity anomalies can be detected from space. The Gravity Recovery and Climate Experiment (GRACE) consists of two satellites that can detect gravitational changes across the Earth.