From Infogalactic: the planetary knowledge core
Jump to: navigation, search
For other uses, see Gravy (disambiguation). 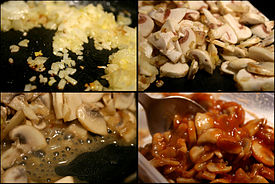 Stages in the preparation of mushroom gravy 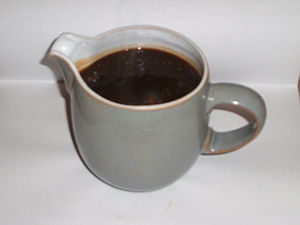 Gravy can be served in a pitcher or gravy boat. 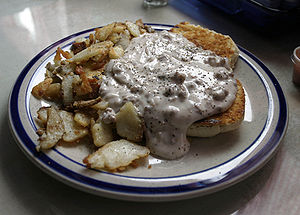 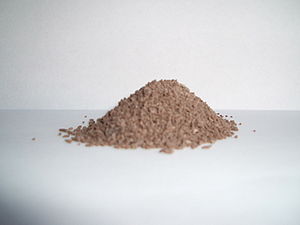 Gravy is a sauce, made often from the juices that run naturally during cooking and often thickened with wheat flour or cornstarch for added texture. In North America the term can refer to a wider variety of sauces. The gravy may be further colored and flavored with gravy salt (a simple mix of salt and caramel food colouring) or gravy browning (gravy salt dissolved in water) or ready-made cubes and powders can be used as a substitute for natural meat or vegetable extracts. Canned gravies are also available. Gravy is commonly served with roasts, meatloaf, rice,[1] and mashed potatoes.

In the UK, a Sunday roast is usually served with gravy. It is commonly eaten with pork, chicken, lamb, turkey, beef, Yorkshire pudding,[2] and stuffing. It is also popular in different parts of the UK (predominantly Northern England and Northern Ireland), to have gravy with just chips (mostly from a fish and chip shop).

In British cuisine, as well as in the cuisines of Commonwealth countries like Australia, New Zealand, and some areas in Canada the word gravy refers only to the meat based sauce (and vegetarian/vegan alternatives) derived from meat juices, stock cubes or gravy granules. Use of the word "gravy" does not include other thickened sauces. One of the most popular forms is onion gravy, which is eaten with sausages, Yorkshire pudding and roast meat.

Throughout the United States, Gravy is commonly eaten with Thanksgiving foods such as turkey, mashed potatoes and stuffing[citation needed]. One Southern United States variation is sausage gravy eaten with American biscuits. Another Southern US dish that has white gravy is chicken fried steak. Rice and gravy is a staple of Cajun and Creole cuisine in the southern US state of Louisiana.

Gravy is an integral part of the Canadian dish poutine.

In many parts of Asia, particularly India, Malaysia, and Singapore, the word "gravy" is used to refer to any thickened liquid part of a dish. For example, the liquid part of a thick curry may be referred to as gravy.[3][4][5]

In the Mediterranean, Maghreb cuisine is dominated with gravy and bread-based dishes. Tajine and most Maghreb (Morocco, Algeria and Tunisia) dishes are derivatives of oil, meat and vegetable gravies. The dish is usually served with a loaf of bread. The bread is then dipped into the gravy and then used to gather or scoop the meat and vegetables between the index, middle finger and thumb, and consumed.

In gastronomy of Minorca, it has been used since the British colonisation during the 17th century in typical Minorcan and Catalan dishes, as for example macarrons amb grevi (pasta).[6]