The gray tree frog or gray treefrog (Hyla versicolor) is a species of small arboreal frog native to much of the eastern United States and southeastern Canada.[2]

As the scientific name implies, gray tree frogs are variable in color owing to their ability to camouflage themselves from gray to green, depending on the substrate where they are sitting. The degree of mottling varies.[3] They can change from nearly black to nearly white. They change color at a slower rate than a chameleon. Dead gray tree frogs and ones in unnatural surroundings are predominantly gray. The female does not croak and has a white throat; however, the male does croak and has a black/gray throat. The female is usually larger than the male.

Both H. chrysoscelis and H. versicolor have bright-yellow patches on their hind legs, which distinguishes them from other tree frogs, such as H. avivoca.[6] The bright patches are normally only visible while the frog is jumping. Both species of gray tree frogs are slightly sexually dimorphic. Males have black or gray throats, while the throats of the females are lighter.[7]

Tadpoles have rounded bodies (as opposed to the more elongated bodies of stream species) with high, wide tails that can be colored red if predators are in the system. Metamorphosis can occur as quickly as two months with optimal conditions. At metamorphosis, the new froglets will almost always turn green for a day or two before changing to the more common gray. Young frogs will also sometimes maintain a light green color and turn gray or darker green after reaching adulthood. 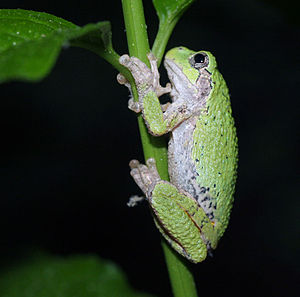 Gray tree frogs inhabit a wide range, and can be found in most of the eastern half of the United States, as far west as central Texas and Oklahoma. They also range into Canada in the provinces of Quebec,[8] Ontario, and Manitoba, with an isolated population in New Brunswick.

The gray tree frog is capable of surviving freezing of their internal body fluids to temperatures as low as -8 °C.[9]

The gray tree frog is most common in forested areas, as it is highly arboreal. Their calls are often heard in rural residential areas of the East Coast and the Midwest. They prefer to breed in semipermanent woodland ponds without fish, but also lay eggs in swamps, vernal pools, man- made fountains and water gardens, and even in rainwater filled swimming pool covers.[citation needed]

These frogs rarely ever descend from high treetops except for breeding. They are strictly nocturnal. Male gray tree frogs rarely have large choruses, as they are mostly solitary animals, but might vocalize competitively at the height of breeding periods. Gray tree frogs may congregate around windows and porch lights to eat insects that are attracted to the light. During the day they often rest on horizontal tree branches or leaves out in the open, even in the sun. Evidently they are less prone to overheating and desiccation than other amphibians and rely on their superb camouflage to hide them from predators.[citation needed] In captivity, they become tame and learn to associate their owners with food, even to the point of lunging at empty fingers that usually contain an insect. 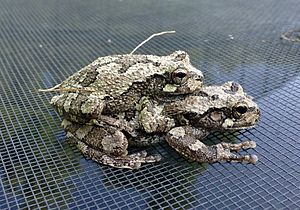 Mating calls and chorusing are most frequent at night, but individuals often call during daytime in response to thunder or other loud noises. 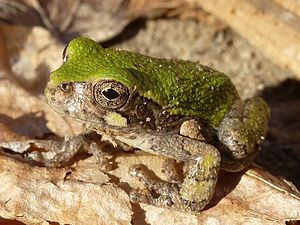