Grayson County is a county located in the southwestern part of the Commonwealth of Virginia. As of the 2010 census, the population was 15,533.[1] Its county seat is Independence.[2] Mount Rogers, the state's highest peak at 5,729 feet (1,746 m), is in Grayson County.

Grayson County was founded in 1793 from part of Wythe County. It was named for William Grayson,[3] delegate to the Continental Congress from 1784 to 1787 and one of the first two U.S. Senators from Virginia. 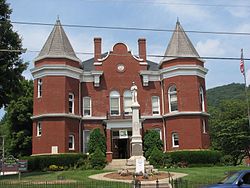 The Old Grayson County Courthouse, now used as a museum and site for public events.

Grayson is economically isolated, without an Interstate Highway and surrounded by mountains. It struggled to attract and retain business; a situation made much worse beginning in 2009 with the recession. Losses of jobs in the furniture and textile sectors resulted in an unemployment rate of 14.6%. As part of the reformation of county government beginning in 2009, the new but idle River North Correctional Center was activated by the state brought in several hundred jobs. County government efforts were successful in retaining Core Fitness' Nautilus facility as the largest employer in the county and integrating local businesses as part of their supply chain. Independence Lumber suffered significant losses in a fire in November 2012 which forced it to relocate operations to North Carolina. Efforts by the county led to the company rebuilding and reopening its facility in 2014 with 125 jobs. The county succeeded in attracting Henson Turbines to relocate from North Carolina in 2014 bring more economic growth to the county. By 2014 a focus on job creation brought additional business operations and 300 more jobs to the county and resulted in an unemployment rate of only 6.9%.[11]

In 2009, the county, in dire financial condition from mismanagement and the failing economy, hired Jonathan Sweet as County Administrator. The county debt was $18.3 million and operational expenses were being paid by added borrowing. By 2015 the county had reversed its fiscal direction, revitalized the business climate, and begun to regain the confidence of its citizens. The county fund balance was 35% of its operating expenses and government operations were financially stable with reduced debt.[11]

Located in the Appalachian region of the United States, Grayson County has long been famous for its traditional, or "old-time" music and musicians. Although the entire Appalachian region is known for its music, the region around Mount Airy, North Carolina and Galax, Virginia is one of the areas where this music has remained strongest, even among young people. The Old Fiddler's Convention, one of the most prominent traditional music contests in the United States, has been held annually in Galax since 1935.[1] Grayson County is also the home of other fiddlers' conventions and old time and bluegrass festivals such as the Grayson County Fiddlers Convention, Fries Fiddlers Convention, and the Wayne C. Henderson Guitar Festival. The Whitetop Mountain Band, The New Ballards Branch Bogtrotters, The Wolfe Brothers String Band, and the Konnarock Critters are among many of the best known old time bands of the area.