Grazia Maria Cosima Damiana Deledda (Italian pronunciation: [ˈɡrattsja deˈlɛdda]; locally: [deˈlɛɖɖa]; 28 September 1871 – 15 August 1936) was an Italian writer who received the Nobel Prize for Literature in 1926[1] "for her idealistically inspired writings which with plastic clarity picture the life on her native island [i.e. Sardinia] and with depth and sympathy deal with human problems in general".[2] She was the first Italian woman to receive the prize.[3]

Born in Nuoro, Sardinia, into a middle-class family, she attended elementary school and then was educated by a private tutor (a guest of one of her relatives) and moved on to study literature on her own. She started writing at a very young age,[vague] inspired by the Sardinian peasants and their struggles.[citation needed]

The first novel she wrote and published was Fiori di Sardegna (Flowers of Sardinia). This novel was published in 1892. She first published some pieces in the fashion magazine L'ultima moda when it still published works in prose and poetry. Nell'azzurro, published by Trevisani in 1890, might be considered her first work. Her family was not supportive of her desire to write. Her works seemed to focus on portraying harsh realities and difficult lifestyles, combining imaginary and autobiographical elements. Her novels tend to criticize social values and moral norms rather than the people who are victims of such circumstances.

Still between prose and poetry are, among the first works, Paesaggi sardi, published by Speirani in 1896. In 1900, after having married Palmiro Madesani, a functionary of the Ministry of War whom she met in Cagliari in October 1899, the writer moved to Rome and after the publication of Anime oneste in 1895 and of Il vecchio della montagna in 1900, plus the collaboration with magazines La Sardegna, Piccola rivista and Nuova Antologia, her work began to gain critical interest. She had two sons and lived a quiet life occupied by her writing.[4] She was a very prolific writer publishing, on average, a novel a year.[4] 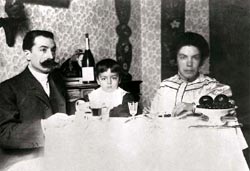 With her husband and son, Rome circa 1905

Cenere was the inspiration for a silent movie with the famous Italian actress Eleonora Duse. It was the only time Duse appeared in film.

Deledda received the Nobel Prize in 1926 in Literature after she had been nominated by Henrik Schück, member of the Swedish Academy.[5] Her response in winning the prize was Già! (Already!) Deledda was very protective of her daily writing routine. Her schedule was exactly the same seven days a week: a late breakfast, a few hours of reading, lunch followed by a nap and then, clearly, ending the day with a few hours of writing. Deledda happened to receive the Nobel Prize almost exactly a year after Benito Mussolini dropped the charade of constitutional rule of the favor of Fascism. Mussolini himself wished to give Grazia a portrait of himself, and he signed it with “profound admiration.” With this string of fame, came a slew of journalists and notable photographers whom she allowed into her home to learn more about her. Her beloved pet crow, Checcha was irritated by all the commotion with people coming in and out. “If Checcha has had enough, so have I,” Deledda was quoted as saying.

Deledda continued to write even as she grew older and weaker. "La Casa del Poeta" and "Sole d'Estate" are two of the collections of short stories she wrote during this time. She showcased her optimistic view of life even as she suffered from painful illnesses. She believed that life was beautiful and serene, unaltered by personal suffering; man and nature are reconciled in order to overcome physical and spiritual hardships. Her later works show how mankind and faith in God are beautiful things.

She died in Rome at the age of 64 of breast cancer. La chiesa della solitudine (1936), Deledda's last novel, is a semi-autobiographical depiction of a young Italian woman coming to terms with her breast cancer. A completed manuscript of the novel "Cosima" (1937) was discovered after her death and published posthumously.[3]

Her work has been highly regarded by Luigi Capuana and Giovanni Verga as well as some lesser known writers and critics such as Enrico Thovez, Pietro Pancrazi (it) and Renato Serra (it); also by Sardinian writers such as Sergio Atzeni, Giulio Angioni and Salvatore Mannuzzu, the founders of what has become known as the Sardinian Literary Spring.

The life, customs, and traditions of the Sardinian people are prominent in her writing.[4] She relies heavily on geographical description and details and her work is most often concerned with transgressions.[4] Many of her characters are social outcasts that struggle in silence and isolation.[4] Deledda's whole work is based on strong facts of love, pain and death upon which rests the feeling of sin and of an inevitable fatality.

In her works we can recognize the influence of the verism of Giovanni Verga and, sometimes, also that of the decadentism by Gabriele D'Annunzio.

In Deledda's novels there is always a strong connection between places and people, feelings and environment. The environment depicted is mostly that one harsh of native Sardinia, but it is not depicted according to regional veristic schemes neither according to the otherworldly vision by D'Annunzio, but relived through the myth.

Deledda has not gained much recognition as a feminist writer potentially due to her themes of women’s pain and suffering as opposed to women’s autonomy.[4]

Deledda's birthplace and childhood home in Nuoro has been preserved as a museum in her honor (the Museo Deleddiano). The museum consists of 10 rooms where the stages of the writer's life are reconstructed.[6]

The voice of Grazia Deledda speaking (in Italian) at the Nobel Prize Ceremony in 1926.