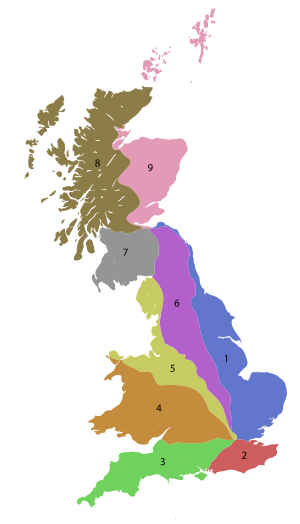 The numbering zones for A & B roads in Great Britain

Each road is given a single letter, which represents the road's category, and a subsequent number, of 1 to 4 digits. Introduced to arrange funding allocations, the numbers soon became used on maps and as a method of navigation. Two sub-schemes exist: one for motorways, and another for non-motorway roads.

Work on classification began in 1913 by the government's Roads Board to determine the quality and usage of British roads. This work was interrupted by the First World War [1] and did not resume until the Ministry of Transport was formed in 1919, given authority to classify highways,[2] and to allocate funding for road maintenance - authority for which was granted by section 17 (2) of the Ministry of Transport Act 1919.[3] It created a classification system for the important routes connecting large population centres or for through traffic, which were designated as Class I, and roads of lesser importance, which were designated as Class II. The definitive list of these roads published on 1 April 1923 following consultations with local authorities.[4][5] Government funding towards the repairs of these roads were set at 60% for the former and 50% for the latter.[6]

Shortly after this, the numbers started to appear in road atlases and on signs on the roads themselves, converting them into a tool for motorists[7] in addition to their use for determining funding. The numbers of the roads changed quite frequently during the early years of the system as it was a period of heavy expansion of the network and some numbered routes did not follow the most usual routes taken.[8] The Trunk Roads Act 1936 gave the Ministry direct control of the major routes and a new classification system was created to identify these routes. Originally these numbers beginning in T were to be made public, however this was eventually deemed unnecessary.[1]

With the introduction of motorways in the late 1950s, a new classification M was introduced. In many cases the motorways duplicated existing stretches of A-road, which therefore lost much of their significance and were in some cases renumbered. There was no consistent approach to this renumbering – some retained their existing number as non-primary A roads (e.g. the A40 running alongside the M40), others were given 'less significant' numbers (e.g. the A34 in Warwickshire became the A3400 after the M40 was built) and the remainder were downgraded to B or unclassified roads (e.g. the A38, which has been replaced by the M5 between Tiverton and Exeter).[specify] Occasionally the new motorway would take the name of the old A-road rather than having its own number. The most notable example of this is the A1(M).[9]

In England and Wales the road numbering system for all-purpose (i.e. non-motorway) roads is based on a radial pattern centred on London. In Scotland the same scheme is centred on Edinburgh. In both cases the main single-digit roads normally define the zone boundaries.[3] The exception is between Zones 1 and 2, where the River Thames defines the boundary.[citation needed][10]

The first digit in the number of any road should be the number of the furthest-anticlockwise zone entered by that road. For example, the A38 road, a trunk road running from Bodmin to Mansfield starts in Zone 3, and is therefore numbered with an A3x number, even though it passes through Zones 4 and 5 to end in Zone 6. Additionally, the A1 in Newcastle upon Tyne has moved twice. Originally along the Great North Road, it then moved to the Tyne Tunnel, causing some of the roads in Zone 1 to lie in Zone 6. The designated A1 later moved to the western bypass around the city, and roads between the two found themselves back in Zone 1. For the most part the roads affected retained their original numbers throughout.

Elsewhere when single-digit roads were bypassed, roads were often re-numbered in keeping with the original zone boundaries.[10]

In a limited number of cases road numbering does not necessarily follow the rules with some anomalously numbered.

Motorways first came to Britain over three decades after the advent of the A-road numbering event, and as a result required a new numbering system. They were given an M prefix, and in England and Wales a numbering system of their own not coterminous with that of the A-road network, though based on the same principle of zones.[11] Running clockwise from the M1 the zones were defined for Zones 1 to 4 based on the proposed M2, M3 and M4 motorways. The M5 and M6 numbers were reserved for the other two planned long distance motorways.[12] The Preston Bypass, the UK's first motorway section, should have been numbered A6(M) under the scheme decided upon, but it was decided to keep the number M6 as had already been applied.[12] The first full length motorway in the UK was the M1 motorway.

Shorter motorways typically take their numbers from a parent motorway in violation of the zone system, explaining the apparently anomalous numbers of the M48 and M49 motorways as spurs of the M4, and M271 and M275 motorways as those of the M27.[13] This numbering system was devised in 1958-9 by the then Ministry of Transport and Civil Aviation, and applied only in England and Wales. It was decided to reserve the numbers 7, 8 & 9 for Scotland.[14] In Scotland, where roads were the responsibility of the Scottish Office (Scottish Government after 1999), the decision was taken to adopt a scheme whereby motorways took the numbers of the all-purpose routes they replaced. As a result, there is no M7 (as no motorway follows the A7), and when the A90 was re-routed to replace the A85 south of Perth, the short M85 became part of the M90.[13]

In England and Wales, the six single-digit numbers reflect the traditionally most important radial routes coming out of London. Starting with the A1 which heads due north, numbers were allocated sequentially in a clockwise direction, thus:[3]

While these routes remain the basis for the numbering of the A road network, they are no longer necessarily major roads, having been bypassed by motorways or other changes to the road network.

These radials are supplemented by two-digit codes which are routes that may be slightly less important, but may still be classified as trunk routes, although many of these routes have lost a lot of their significance due to motorway bypasses, or the upgrading of other A-roads.[citation needed] These routes are not all centred on London, but as far as possible follow the general principle that their number locates them radially clockwise from the associated single digit route.[15] For example, the A10 (London to King's Lynn) is the first main route clockwise from the A1, the A11 (London to Norwich) is the next, then the A12 (London to Great Yarmouth) and the A13 (London to Shoeburyness); the next radial is the A2, followed by the A20 (London to Dover), and so on. These roads have been numbered either outwards from or clockwise around their respective hubs, depending on their alignment.[specify]

The system continues to three and four digit numbers which further split and criss-cross the radials. Lower numbers originate closer to London than higher numbered ones.[specify] As roads have been improved since the scheme commenced, some roads with 3 or 4 digit numbers have increased in significance, for example the A127, A1079 and A414.[specify] New routes have also been allocated 3 or 4 digit numbers, for example the Edinburgh City Bypass is the A720.

Lists of A roads

Some A roads are designated trunk roads, which implies that central government rather than local government has responsibility for them. A more recent classification is that of primary routes, the category of recommended routes for long distance traffic. Primary routes include both trunk and non-trunk roads.

Some sections of A roads have been improved to the same standard as motorways, but do not completely replace the existing road; they form a higher standard part of the route for those who are not excluded.[9] These sections retain the same number but are suffixed with (M), for example the A1(M) and A404(M).[9] There have been occasions where this designation has been used to indicate motorway bypasses of an existing road, but the original retains the A road designation, for example A3(M), A329(M), A38(M), A48(M) and A627(M).[9]

B roads are numbered collector routes, which have lower traffic densities than the main trunk roads, or A roads. This classification has nothing to do with the width or quality of the physical road, and B roads can range from dual carriageways to single track roads with passing places. B roads follow the same numbering scheme as A roads, but almost always have 3- and 4-digit designations.[16] Many 3-digit B roads outside the London area are former A roads which have been downgraded owing to new road construction; others may link smaller settlements to A roads.

Lists of B roads

Roads and lanes with yet lower traffic densities are designated C, D and U (Unclassified) roads, but while these are numbered, in general this is done purely for the benefit of the local authorities who are responsible for maintaining them, and the numbering is arbitrary and does not, or should not, appear on any public signage.[17] Some exceptions to this are known, however.[18] These other classified roads, however, are taken into account when planning officers deal with certain planning applications, including the creation of a new vehicular access onto a highway.

Some ancient routes, such as Roman roads, travel for great distances and have a single modern number for the majority of their length (for example, the A5 for the Roman road Watling Street and the A68 for Dere Street).[citation needed] Others, such as the pre-Roman Icknield Way, which has several numbers including the B4009 and the Roman Fosse Way are nowadays rather patchy and where a modern road exists, are numbered according to the local scheme.[citation needed]