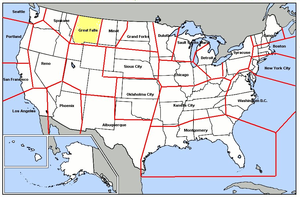 The Great Falls Air Defense Sector (GFADS) is an inactive United States Air Force organization. Its last assignment was with the Air Defense Command 29th Air Division, being stationed at Malmstrom Air Force Base, Montana. It was inactivated on 1 April 1966

The Sector was inactivated on 1 April 1966 as part of ADC reorganization and consolidation, the command being redesignated as the 28th Air Division.