The Great Lakes Megalopolis consists of the group of North American metropolitan areas which surround the Great Lakes region and Saint Lawrence Seaway. It is mainly within the Midwestern United States, the Southern Ontario area of Canada, along with large parts of Pennsylvania, New York, and Quebec. It is the largest and most populated megalopolis in North America.

The region cuts a wide swath from Minneapolis to Pittsburgh and extends from the Duluth-Superior corridor, through the Green Bay-Kewaunee-Oconto corridor, the Milwaukee-Chicago corridor through the South Bend-Lansing-Kalamazoo corridor to the Detroit–Toledo corridor, and the Quebec City – Windsor Corridor and includes Cleveland, Akron, Erie, Fort Wayne, Grand Rapids, Ottawa, and Buffalo, reaching as far east as Rochester and Johnstown, and as far west as the Twin Cities. The region had an estimated population of 59,144,461 as of 2011. It is projected to reach a population of approximately 65 million by 2025. 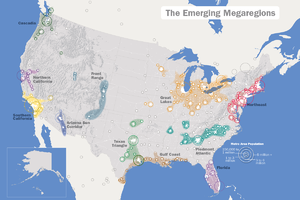 Map of the emerging American-Canadian megaregions.

The region was partially outlined as an emergent megalopolis in the 1961 book Megalopolis: The Urbanized Northeastern Seaboard of the United States by French geographer Jean Gottmann. Gottmann envisaged the development of other megalopolies in the U.S.: BosWash, from Boston to Washington, D.C., Chipitts from Chicago to Pittsburgh, and SanSan, from San Francisco to San Diego. In 1965, Herman Kahn speculated about the future of the three megalopoleis in the year 2000,[1] referring to their names as "half-frivolous" and not mentioning Gottman. In the 1960s and 1970s, urban planner and architect Constantinos Doxiadis authored books, studies, and reports including those regarding the growth potential of the Great Lakes Megalopolis.[2] Doxiadis envisioned Detroit as the central urban area in the Great Lakes Megalopolis. According to him, the megalopolis extended "from Milwaukee and Chicago to Detroit, Pittsburgh and Buffalo and into Canada from Windsor to Montreal and Quebec."[2][3]

The Virginia Tech Metropolitan Institute's Beyond Megalopolis, an attempt to update Gottmann's work, outlined a similar "Midwest" megapolitan area as one of ten such areas in the United States (Canada is discussed tangentially).[4] Over 200 million tons of cargo are shipped annually through the Great Lakes.[5][6][7] Half the nation's population growth and two-thirds of its economic growth is expected to occur within the megaregions over the next four decades. The America 2050 project has identified eleven Megaregions of the United States, including the Great Lakes Megalopolis.[8][A] In Canada, parts of the region are also referred to as the Quebec City–Windsor Corridor.

According to the Brookings Institution, if it stood alone as a country, the economy of the Great Lakes region which includes most of the Great Lakes Megalopolis, would be one of the largest economic units on earth (with a $4.5-trillion gross regional product). The Great Lakes contain one-fifth of the world's surface fresh water and have a combined shoreline of 10,210 miles (17,017 km). About 200 million tons of cargo are shipped by way of the Great Lakes each year.[6][9][10]

Tourism is an important economic factor in and around the Great Lakes. The Great Lakes Cruising Coalition supports passenger ship cruises through a joint U.S-Canadian venture to Great Lakes Ports and the Saint Lawrence Seaway.[11][12]

A. ^ a Various sources include Montreal and Ottawa in the megalopolis, while excluding Minneapolis–Saint Paul, Kansas City, Cincinnati, Indianapolis, Louisville, and Columbus.[16]