Great North Eastern Railway[1] often referred to as GNER, was a train operating company in the United Kingdom owned by Sea Containers that operated the InterCity East Coast franchise from April 1996 until December 2007, when Sea Containers was stripped of the franchise due to poor financial management. It operated InterCity train services on the East Coast Main Line. 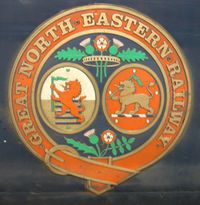 Sea Containers was awarded a seven-year franchise to run the InterCity East Coast franchise from April 1996.

In October 2004 the Strategic Rail Authority issued the Invitation to Tender for the InterCity East Coast franchise to the four shortlisted bidders, Danish State Railways/EWS, First, GNER and Virgin Rail Group.[5] In March 2005 the Strategic Rail Authority awarded the franchise to GNER for seven years, with a three-year extension based on targets being met, starting on 1 May 2005.[6][7]

The initials GNER were similar to LNER, the company that operated the route before being nationalised as part of British Railways in 1948. Additionally, two of the LNER's predecessor companies were the GNR, who built King's Cross station, and the GER. GNER made further links to its past by adopting a dark-blue livery with red trimming lines for its trains, similar to that used by the GER, and using a Victorian coat of arms-style crest on their trains.

GNER suffered two major accidents during its operating years. In the Hatfield crash on 17 October 2000, the 12:10 London King's Cross – Leeds train derailed just south of Hatfield station due to a hairline crack in the rail. Four passengers were killed in the restaurant car, which struck an overhead catenary stanchion during the derailment. GNER's other accident was the Great Heck rail crash on the morning of 28 February 2001, where a Newcastle–London service hit a Land Rover that had driven off the M62 motorway. The GNER train derailed and was subsequently hit by a Freightliner train from Immingham to Ferrybridge, resulting in the death of ten people.

GNER's principal routes were from London King's Cross to Leeds and Edinburgh Waverley.

From Edinburgh Waverley, selected services continued on to Motherwell and Glasgow Central, Inverness, or Aberdeen. From Leeds, some trains ran to and from Bradford Forster Square, Skipton, and Harrogate. 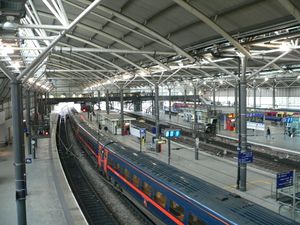 The service between King's Cross and Leeds was generally hourly, with trains serving most main intermediate stations. With the completion of the Allington Chord, near Grantham, having increased track capacity, GNER began to operate a full half-hourly service throughout the day on this route in May 2007.

A half-hourly service between King's Cross and Newcastle operated for most of the day, departing from London on the hour and the half-hour. The 'top of the hour' departures continued through to Edinburgh (with the 10:00 keeping the traditional name Flying Scotsman); some of these ran on to either Glasgow Central, Aberdeen or Inverness. These trains generally ran as limited-stop expresses between London and Newcastle: all trains called at York, and most at Peterborough and Darlington, though afternoon and evening departures from King's Cross ran non-stop to Doncaster or York. The trains leaving King's Cross on the half-hour generally terminated at Newcastle and served other intermediate stations such as Grantham, Newark, Retford, Doncaster and Durham as well as Peterborough, York, and Darlington.

GNER operated ten trains per day between King's Cross and Glasgow. With the upgrade of the West Coast Main Line (WCML) between London Euston and Glasgow to 125 mph completed, GNER could no longer compete with Virgin Trains on this route in terms of journey times (5hrs 30mins compared to the new 4hrs 25min time on the WCML), but they did provide a link from Glasgow to Newcastle and York and a secondary route for use when the WCML was closed for engineering work. 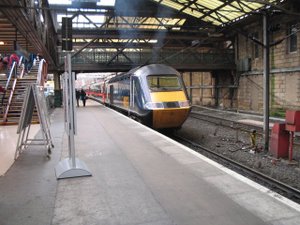 Class 43 43116 at Edinburgh Waverley, with a service from Aberdeen to Leeds. These trains were used on routes where the line was not fully electrified, and on the route from London King's Cross to Skipton.

There were three trains per day each way between King's Cross and Aberdeen, the journey time being just over seven hours. There was also one service per day arriving at Aberdeen from Leeds. These services were operated using a diesel InterCity 125 because the Edinburgh to Aberdeen line and the section of the Cross Country Route between Leeds and York are not electrified.

A daily service operated between King's Cross and Inverness, named the Highland Chieftain, a journey taking just over 8 hours. The service was operated using a diesel InterCity 125, as the line north of Edinburgh is not electrified. 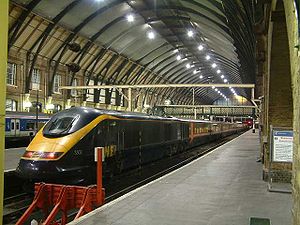 Until December 2005, GNER’s White Rose service was operated by Class 373 Regional Eurostar sets, one of which is seen here at London King's Cross

There were two trains per day between London and Bradford Forster Square. These were extensions of the King's Cross–Leeds services and were operated using an electric InterCity 225. Some of these services were also operated using a Class 89 electric locomotive, Mark 4 coaches and a DVT until 2001.

There was a morning train from Skipton and Keighley to King's Cross with an early evening return. As with the Bradford trains, this was an extension to the Leeds–London service. Though the line to Skipton is electrified throughout, the GNER service to/from the town operated using a diesel InterCity 125 because the electrical infrastructure on the Leeds-to-Skipton line at the time was insufficient to support an InterCity 225.

There was a Monday-Saturday morning departure from Harrogate to King's Cross. However, there was no return journey so passengers were required to change at Leeds or York on to Northern Rail services to Harrogate. This service was operated using a diesel InterCity 125 as the line to Harrogate is not electrified.

The Saturday running of this service was the week's only GNER southbound service from Leeds not to call at Wakefield Westgate. This service departed from Leeds and took the Selby line to join the East Coast Main Line at Hambleton. 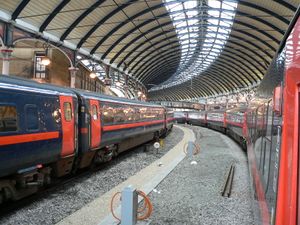 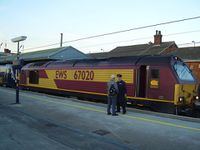 Class 89 Co-Co prototype electric locomotive 89001 Avocet was purchased by GNER and returned to service in March 1997, being used on services to Leeds and Bradford Forster Square until it failed in 2001.

From May 2000 until December 2005, GNER leased Class 373 Regional Eurostars from Eurostar. These were used on services to York and later Leeds but were restricted to 110 mph between Grantham and Doncaster because of problems with the overhead wire and pantograph interface. Due to gauging restrictions, they were not permitted to operate north of York to Newcastle, Glasgow or Edinburgh.

GNER bought twelve Mark 3 sleeping cars, planning to convert them to passenger carriages to lengthen High Speed Trains. This programme was cancelled when GNER was able to lease some Mark 3s that were being released by Virgin CrossCountry when it withdrew its High Speed Trains.

The InterCity 225s were refurbished by Bombardier Transportation in 2003–2006 and named Mallards in honour of the LNER steam locomotive. They boasted re-designed interiors and new features such as Wi-Fi and electric sockets at every seat pair.

A commitment for the new franchise was to upgrade the High Speed Trains to the same standards as the InterCity 225s.[6] The Class 43 power cars were overhauled at Brush Traction including repowering with MTU 16V4000R41 engines.

The High Speed Trains were allocated to Craigentinny Depot and the InterCity 225s to Bounds Green Depot. Neville Hill Depot and Heaton Depot carried out lighter maintenance and servicing.

GNER placed a trial order for two tilting trains, based on Italian Pendolino technology, these trains were due to arrive in the early 2000s, but the order was cancelled, and therefore, no Pendolinos were used by GNER.[8]

In May 2006 it was revealed that GNER's parent company Sea Containers was in financial difficulties, and was rumoured to be bordering on insolvency. Questions were raised as to whether GNER could continue operating should its parent company cease trading. The company rejected this assertion, stating that its lines of credit and financial activities were "ring-fenced" away from Sea Containers, and therefore a cessation of services for this reason was impossible. It did not however stop speculation from rival TOCs (principally First) and Virgin Rail Group that they would be keen to rebid for the ECML franchise if it were put back out to tender. In July 2006 rumours began circulating that Sea Containers would be prepared to sell GNER in an effort to stave off resorting to Chapter 11 proceedings to secure itself from its creditors.[9]

In July 2006 the High Court rejected GNER's judicial review over the Office of Rail Regulation's decision to allow Grand Central to operate trains along part of the East Coast Main Line,[10] – and in particular its right to call at York, one of the principal (and lucrative) stops on the ECML. GNER had made its application partly on the basis that 'open-access' train operators (like Hull Trains) are not required to meet the same fixed costs for accessing Network Rail's infrastructure as train operating companies running services under a contract or 'franchise' with the Department for Transport. GNER's case failed principally because the High Court determined that not only did European law permit the Rail Regulator to establish a charging regime for open-access operators which was different from the one which applies to franchised operators (such as GNER), in this case not imposing a fixed charge on open-access operators, but that if he had not done so, he would have been acting illegally because of the very different conditions under which open-access operators and franchised operators get access to the network. The High Court (Mr Justice Sullivan) refused GNER permission to appeal.

Two days before the public judgment in the above action, GNER announced that Christopher Garnett, the company's chief executive officer, was to step down, having occupied that position since Sea Containers won the first InterCity East Coast franchise. Amid growing industry speculation that Sea Containers was working towards a "financial restructuring", the company's President and Chief Executive Bob Mackenzie was named as Garnett's successor.[11]

The problems were further fuelled by GNER's poor profitability, which had been linked to the company's overbidding for the franchise coupled to what proved to be crippling premium repayments to the government. The company blamed the effects of the 7/7 terrorist attacks, increased electricity prices, and increased competition from low-cost airlines for the decline in passenger numbers. It also faced a growing challenge from the revitalised West Coast services operated by Virgin Trains. The company attempted to address the problem by waiving booking fees on internet sales, cutting staff numbers, and raising fares and car-parking charges where the market could bear it. In a press interview in September 2006, GNER's ex-chief Christopher Garnett hinted at a bleak future for GNER and the franchising system, claiming that the trend among TOCs to overbid for the renewal of franchises would result in a financially unsustainable railway.[12]

In October 2006 Sea Containers filed for Chapter 11 bankruptcy protection, therefore allowing it to continue trading while it sorted out its finances.[13]

The last northbound train to be operated by GNER was the 20:30 London King's Cross - Newcastle on 8 December 2007. GNER gave out chocolate coins with the crest and the wording "Thank you for your custom with GNER".[citation needed]