From Infogalactic: the planetary knowledge core
Jump to: navigation, search
This article is about the children's hospital. For the TV series, see Great Ormond Street (TV series). For the defunct magazine, see GOSH!

The Hospital is known internationally for receiving from J. M. Barrie the copyright to Peter Pan in 1929, which has provided significant funding for the institution.

After a long campaign by Dr Charles West, the Hospital for Sick Children was founded on 14 February 1852 and was the first hospital providing in-patient beds specifically for children in England.[1] Despite opening with just 10 beds, it grew into one of the world's leading children's hospital through the patronage of Queen Victoria, counting Charles Dickens, a personal friend of Dr West, the Chief Physician, as one of its first fundraisers. The Nurses League was formed in February 1937.[2]

Audrey Callaghan, wife of James Callaghan (prime minister of the United Kingdom from 1976 to 1979), served the hospital as Chairman of the Board of Governors from 1968 to 1972 and then as Chairman of the Special Trustees from 1983 until her final retirement in 1990.[3]

Diana, Princess of Wales, served as president of the Hospital from 1989 until her death. A plaque at the entrance of the hospital commemorates her services, as well as a bust in the lobby of the hospital chapel.

In 2002 Great Ormond Street Hospital commenced a redevelopment programme which is budgeted at £343 million and the next phase of which is scheduled to be complete by the end of 2016.[5] The redevelopment is needed to expand capacity, deliver treatment in a more comfortable and modern way, and to reduce unnecessary inpatient admissions.

In July 2012, Great Ormond Street Hospital was featured in the opening ceremony of the London Summer Olympics.

The hospital’s archives are available for research under the terms of the Public Records Act 1958 and a catalogue is available on request.[6] Admission records from 1852 to 1914 have been made available online on the Historic Hospital Admission Records Project.[7] 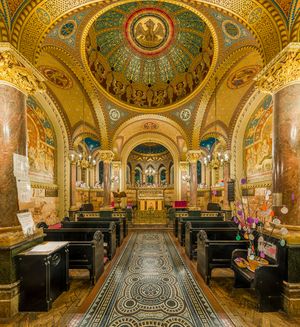 St Christopher's Chapel is a chapel decorated in the Byzantine style and Grade II listed building located in the Variety Club Building of the hospital. Designed by Edward Barry (son of the architect Sir Charles Barry who designed the Houses of Parliament) and built in 1875, it is dedicated to the memory of Caroline Barry, wife of William Henry Barry (eldest son of Sir Charles Barry) who provided the £40,000 required to build the Chapel and a stipend for the chaplain.[8] It was built in "elaborate Franco-Italianate style". As the chapel exists to provide pastoral care to ill children and their families, many of its details refer to childhood.The stained glass depicts the Nativity, the childhood of Christ and biblical scenes related to children. The dome depicts a pelican pecking at her breast in order to feed her young with drops of her own blood, a traditional symbol of Christ's sacrifice for humanity. Along the rear of the chapel is a row of teddy bears and other soft toys, provided by families of ill children, known as the Teddy Bear Choir.[9] In addition, the chapel has a prayer tree where messages of hope and support can be written for sick children at the hospital, and placed on the tree.

When the old hospital was being demolished in the late 1980s, the chapel was moved to its present location via a 'concrete raft' to prevent any damage en route. The stained glass and furniture were temporarily removed for restoration and repair. It was reopened along with the new Variety Club Building on 14 February 1994 by Diana, Princess of Wales, then president of the hospital.

In April 1929 the hospital was the recipient of playwright J. M. Barrie's copyright to the Peter Pan works, with the provision that the income from this source not be disclosed. This gave the institution control of the rights to these works, and entitled it to royalties from any performance or publication of the play and derivative works. Four theatrical feature films were produced,[10] innumerable performances of the play have been presented, and numerous editions of the novel were published under licence from the hospital. Its trustees commissioned a sequel novel, Peter Pan in Scarlet, which was published in 2006 and received mixed reviews,[11][12] with a film adaptation planned.[13]

When the copyright first expired at the end of 1987 in the UK, 50 years after Barrie's death, the UK government's Copyright, Designs and Patents Act of 1988[14] granted the hospital a perpetual right to collect royalties for public performances, commercial publication, or other communications to the public of the work but this does not constitute a true copyright. When copyright term itself was subsequently extended to the author's life plus 70 years by a European Union directive in 1996 standardising terms throughout the EU, GOSH revived its copyright of Peter Pan which then expired in 2007. The terms of the Copyright, Designs and Patents Act now prevail in the UK.

GOSH has been in legal disputes in the United States, where the copyright term is based on date of publication, putting the 1911 novel in the public domain, although the Hospital asserts that the 1928 version of the play is still under copyright in the US.[15] Legal opinion as to whether or not permission is required for new works based on the story and characters is divided and open to interpretation and so far, there has been no legal precedent to prove one view or the other.

The hospital has relied on charitable support since it first opened. One of the main sources for this support is Great Ormond Street Hospital Children's Charity. Whilst the NHS meets the day-to-day running costs of the hospital, the fundraising income allows Great Ormond Street Hospital to remain at the forefront of child healthcare.[16] The charity aims to raise over £50 million every year to complete the next two phases of redevelopment, as well as provide substantially more fundraising directly for research. The charity also purchases up-to-date equipment, and provides accommodation for families and staff.[17][18]

The charity's teardrop logo was designed for the Wishing Well Appeal in 1987 by the firm Collett Dickenson Pearce.

Great Ormond Street Hospital Children's Charity was one of the charities that benefited from the national Jeans for Genes campaign, which encourages people across the UK to wear their jeans and make a donation to help children affected by genetic disorders. All Great Ormond Street Hospital Charity's proceeds from the campaign went to its research partner, the UCL Institute of Child Health.

On 6 August 2009, Arsenal F.C. confirmed that Great Ormond Street Hospital Children's Charity was to be their 'charity of the season' for the 2009-10 season. They raised over £800,000 for a new lung function unit at the hospital,[19] having raised £532,816 for Teenage Cancer Trust in the previous season.

On 30 March 2010, Channel 4 staged the first Channel 4's Comedy Gala at the O2 Arena in London, in aid of the charity. The event has been repeated every year since, raising money for Great Ormond Street Hospital Children's Charity each time.

In 2011, Daniel Boys recorded a charity single called 'The World is Something You Can Imagine'. It was also released as with proceeds going to the Disney Appeal at Great Ormond Street Hospital.[22]