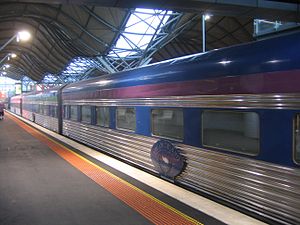 The Overland at Southern Cross station in February 2009

Great Southern Rail (GSR) is an interstate passenger train operator in Australia. Formed on November 1, 1997, it is a subsidiary of Allegro Funds.

As part of the privatisation of Australian National, on 1 November 1997, The Ghan, Indian Pacific and The Overland were sold to Great Southern Rail, a consortium of GB Railways, Legal & General, Macquarie Bank, RailAmerica, G13 Pty Ltd[1] and Serco.[2] Included were 186 items of rolling stock, primarily stainless steel carriages and the Adelaide and Alice Springs stations.[3] In October 1999, Serco bought all the shares from its consortium partners.[4][5]

While the former two services are profitable, the operation of The Overland is subsidised by the Victorian and South Australian governments.[6]

GSR reduced costs by renegotiating staff pay and conditions, and increased revenues by extending the Ghan, which originally ran from Adelaide to Alice Springs, so that it ran once each week from Sydney and once each week from Melbourne. With completion of the railway from Alice Springs to Darwin, the Ghan now runs from Adelaide to Darwin. While GSR owns the passenger car fleet, Pacific National provides motive power for the services.

The Southern Spirit was a luxury cruising train service, launched by Great Southern Rail on 17 June 2008, with the inaugural service running on 25 November 2008.[7] It last ran in February 2012.