From Infogalactic: the planetary knowledge core
Jump to: navigation, search
Not to be confused with Fairfield Swamp Fight.

The Great Swamp Fight, or the Great Swamp Massacre, was a crucial battle fought during King Philip's War between colonial militia of New England and the Narragansett tribe in December of 1675. It was fought near the villages of Kingston and West Kingston in present-day South Kingstown, Rhode Island. The combined force of the New England militia including 150 Native Pequots, inflicted a huge number of Narragansett casualties, including many hundred women and children. The battle has been described as "one of the most brutal and lopsided military encounters in all of New England's history"[3] Since the 1930s Narragansett and Wampanoag people commemorate the battle annually, in a ceremony initiated by Narragansett-Wampanoag scholar Princess Red Wing.

Metacomet, known to the colonists as King Philip, assumed leadership of the Pokanoket Indians, who had helped the original pilgrim settlers survive,[4] after the death of his brother. Eventually, faced with diminishing resources as English settlements expanded, Philip began laying plans to attack the English settlers in Massachusetts, Rhode Island, and Connecticut. He slowly built a confederation of neighboring Indian tribes. He also gathered muskets and gunpowder for the eventual attack, but only in small numbers in order that the English would not be alarmed.[5]

In King Philip's War, the Native Americans wanted to regain lands from English control. They waged successful attacks on settlements in Massachusetts and Connecticut, but Rhode Island was spared at the beginning as the Narragansett remained officially neutral.[6] The war actually began after Wampanoag braves killed some English-owned cattle near their tribal headquarters in what is now Bristol, Rhode Island. English livestock was always a source of friction as cattle repeatedly trampled Indian corn. The natives first laid an ambush for soldiers led by Captains Hutchinson and Wheeler. Eight soldiers were killed in the trap. The rest of the company barely made it back to the garrison at Brookfield. In October, hostile Indians struck again with raids on the towns of Hatfield, Northampton and Springfield where 30 houses were burned. As winter set in, the attacks diminished.

File:King Philip C by Revere.jpg
A Portrait of King Philip, by Paul Revere, illustration from the 1772 edition of Benjamin Church's "The Entertaining History of King Philip's War."

At the center of this cataclysm was one man, Metacom, leader of the Pokanokets, a tribe within the Wampanoag Indian Federation. At an early age, when relations between the natives and settlers were less stressed, Metacom was given the nickname of King Philip by the English, because of his haughty mannerisms. One of the many ironies of this conflict is that Philip was the son of Massasoit—the same Massasoit who had helped the Plymouth Pilgrims survive their first winter in the New World. A father's kindness would become a son's curse.[8] In some cases, local residents fought on the native side of the battle. Records indicate that Joshua Tefft wounded Captain Nathaniel Seely of Connecticut, who subsequently died. An Indian spy reported that Joshua, "did them good service & killed & wounded 5 or 6 English in that fight & before they would trust him he had killed a miller an English man at Narragansett and brought his scalpe to them." [9]

On December 15, 1675, Narraganset warriors attacked a nearby garrison known as Bull's Garrison and killing at least fifteen English individuals. One of these individuals, a fifteen-year-old boy named James Eldred survived a harrowing escape from this event, including having a tomahawk thrown at him at close range, and a hand-to-hand encounter with a Narraganset warrior. This occurred along what is now known today as "Indian Run Brook."

Four days later, the Great Swamp Battle took place. Led by a Native guide, Indian Peter, on December 19, 1675 on a bitterly cold storm-filled day, the main Narragansett settlement in modern South Kingstown, Rhode Island was found and attacked by the colonial militia from Plymouth Colony, Connecticut Colony and Massachusetts Bay Colony. Led there by an Indian guide, the militia were able to reach the settlement because an unusually cold late fall had frozen the swamp, making an assault possible.[10] The massive fort, which occupied about 5 acres (20,000 m2) of land and was initially occupied by over a thousand Natives, was eventually overrun after a fierce fight. The Native settlement was burned, its inhabitants, including women and children, killed or evicted and most of the tribe's winter stores destroyed. It is believed that between at least 97 Narragansett warriors and 300 - 1000 Native non-combatants were killed though exact figures are unknown.[11] Many of the warriors and their families escaped into the frozen swamp; there hundreds more died from wounds combined with the harsh conditions. Facing a winter with little food and shelter, the whole surviving Narragansett tribe was forced out of the quasi-neutrality some had tried to maintain in the ongoing war and joined the fight alongside Philip. The colonists lost many of their officers in this assault and about seventy of their men were killed and nearly 150 more wounded. The dead and wounded colonial militiamen were evacuated to the settlements on Aquidneck Island in Narragansett Bay where they were buried or cared for by many of the Rhode Island colonists until they could return to their homes. 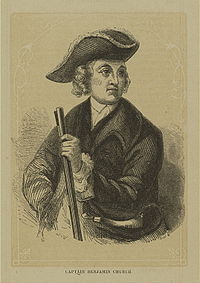 The Great Swamp Fight was a critical blow to the Narragansett tribe from which they never fully recovered.[13] In April 1676, the Narragansett were completely defeated when their chief sachem Canonchet was captured and soon executed and female sachem, Queen Quaiapen and her warriors were killed on July 2, 1676. On August 12, 1676 the leader of the uprising, Wampanoag sachem, Metacomet (also known as King Philip), was shot and killed by John Alderman, a Native American soldier in Benjamin Church's company. Hence, settlers won King Philip's War, the major act of military resistance by Native Americans to the colonization of New England.

The first marker was placed at the presumed site of the battle in 1906. The rough granite shaft about 20 feet high was erected by the Rhode Island Society of Colonial Wars to commemorate this battle. Around the mound on which the shaft stands are four roughly squared granite markers engraved with the names of the colonies which took part in the encounter and two tablets on opposite sides of the shaft give additional data. The markers are near West Kingston, Rhode Island, in Washington County.

The dedication of the monument was an event with descendents of both sides of the battle attending. The dedication speaker said of the monument, "We dedicate this rugged granite shaft, frost-riven from the native hills, untouched by the tool of man, as a fitting emblem of the rugged and unadorned Pilgrim and Puritan of 16 hundred and 75." Three members of the Narragansett tribe pulled the veil from the stone before the sky opened and the rain poured down.[14] The inscription states:

Attacked within their fort upon this island the Narragansett Indians made their last stand in King Philip’s War and were crushed by the united forces of the Massachusetts Connecticut and Plymouth Colonies in the “Great Swamp Fight” Sunday 19 December 1675. This record was placed by the Rhode Island Society of Colonial Wars 1906.

A second marker was placed there in 1916 which has since gone missing. The inscription was:

In memory of Major Samuel Appleton of Ipswich, Massachusetts who commanded the Massachusetts forces and led the victorious storming column at the Great Swamp Fight Dec. 19, 1675. This Tablet placed by the Rhode Island Historical Society 1916.

In the 1930s, Narraganssett-Wampanoag scholar Princess Red Wing initiated an annual commemorative ceremony at the site of the battle.[15]

Order of battle of the army of the United Colonies

The army of the United Colonies which fought at the Great Swamp Massacre consisted of three regiments on unequal strength with each regiment containing companies raised from one of the three colonies.