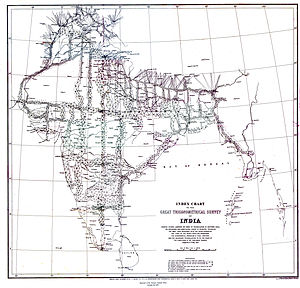 A map showing the triangles and transects used in the survey, produced in 1870

The Great Trigonometrical Survey was a project which aimed to measure the entire Indian subcontinent with scientific precision. It was begun in 1802 by the infantry officer William Lambton, under auspices of the East India Company.[1] Under the leadership of his successor, George Everest, the project was made a responsibility of the Survey of India. Everest was succeeded by Andrew Scott Waugh and after 1861 the project was led by James Walker, who saw the first completion of it in 1871.

Among the many accomplishments of the Survey were the demarcation of the British territories in India and the measurement of the height of the Himalayan giants: Everest, K2, and Kanchenjunga. The Survey had an enormous scientific impact as well, being responsible for one of the first accurate measurements of a section of an arc of longitude, and for measurements of the geodesic anomaly which led to the development of the theories of isostasy.

The first triangulations across the Peninsula

From its inception in 1600 to the beginning of the nineteenth century, the British East India Company gained more territory on the Indian subcontinent.[1] With the acquisition of new territory, it employed several explorers and cartographers to provide maps and other information on its territories, most notably James Rennell, from 1767 in Bengal. As Rennell proceeded making maps, some serious flaws in them surfaced, based on a lack of precise measurements.[1] In 1800, shortly after the English victory over Tipu Sultan, William Lambton, an infantry soldier with experience in surveying proposed to remedy precisely that, through a series of triangulations initially through the newly acquired territory of Mysore and eventually across the entire subcontinent.[2] 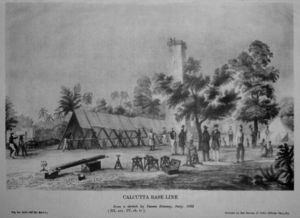 Measurement of the Calcutta baseline in 1832 based on a sketch by James Prinsep. This show surveyors stretching a chain on coffers supported on pickets. The chain is housed under shade to reduce errors due to thermal expansio and is aligned using a boning telescope.

The Great Trigonometrical Survey of India started on 10 April 1802 with the measurement of a baseline near Madras.[1] Major Lambton selected the flat plains with St. Thomas Mount at the north end and Perumbauk hill at the southern end. The baseline was 7.5 miles (12.1 km) long. Lieutenant Kater was despatched to find high vantage points on the hills of the west so that the coastal points of Tellicherry and Cannanore could be connected. The high hills chosen were Mount Delly and Tadiandamol. The distance from coast to coast was 360 miles (580 km) and this survey line was completed in 1806.[3] The East India Company thought that this project would take about 5 years but eventually it took nearly 70, lasting past the Indian Rebellion of 1857 and the end of company rule in India in 1858.[citation needed] Because of the extent of the land to be surveyed, the surveyors did not triangulate the whole of India but instead created what they called a "gridiron" of triangulation chains running from North to South and East to West.[1] At times the survey party numbered 700 people.[4]

Error creating thumbnail: File missing
A Zenith sector was an upward facing telescope with accurate angle measurement scales. A star close to the zenith of known declination from the pole star was used to determine latitude as direct measurement of the pole star could be affected by refraction.

The Trigonometrical Survey was conducted independent of other surveys, notably the topographical and revenue surveys. In 1875 the decision was taken that the Survey budget should be reduced from 240,000 to 200,000 pounds. This resulted in a reorganization under Surveyor-General Colonel J.T. Walker to amalgamate the Great Trigonometrical, Topographical and Revenue Surveys into the Survey of India.[5]

Triangulation surveys were based on a few carefully measured baselines and a series of angles. The initial baseline was measured with great accuracy, since the accuracy of the subsequent survey was critically dependent upon it. Various corrections were applied, principally temperature. An especially accurate folding chain was used, laid on horizontal tables, all shaded from the sun and with a constant tension. The early surveys made use of large and bulky theodolites made by William Carey, a Zenith sector made by Jesse Ramsden and 100-foot chains. Later surveys used more compact theodolites. 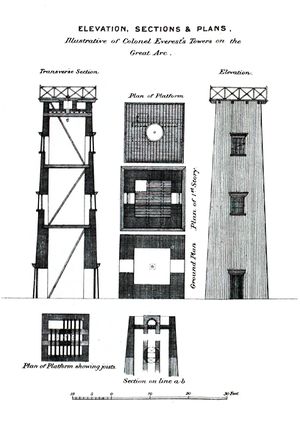 Survey towers used by Everest to house the instruments. 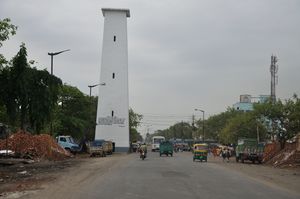 One of these towers near Kolkata in 2012

Accurate instruments could not always be purchased through the standard system of government contract and Everest personally supervised the construction of instruments. He had a maker, Henry Barrow, set up an instrument company in Calcutta. For a while Barrow was succeeded by Syed Mohsin from Arcot and after his death the instruments were supplied by Cooke from York.[6][7]

To achieve the highest accuracy a number of corrections were applied to all distances calculated from simple trigonometry:

Many surveyors became very rich. Prominent among them was Andrew Chamrette, his son Peter Chamrette, and his grandson Charles Chamrette, who worked for the GTS of India from 1802 to 1876. This family acquired in excess than 1,800 acres (7.3 km2) of land in the Kapsi, Yavatmal and Maharashtra (formerly CP Berar) districts. George Everest bought 600 acres (2.4 km2) of land near Dehra Doon.[citation needed]