There has been a settlement in the area since before the Norman Conquest.

Great Witley was in the lower division of Doddingtree Hundred. [1]

Following the Poor Law Amendment Act 1834 Great Witley Parish ceased to be responsible for maintaining the poor in its parish. This responsibility was transferred to Martley Poor Law Union.[2]

The village is home to Witley Court, a Jacobean country house extended on a number of occasions throughout its history, but which became derelict after a spectacular fire in 1937. The mansion, formerly one of the finest in the Midlands, is now in the care of English Heritage, who describe it as their number one ruin. They have restored the extensive gardens leaving the impressive skeletal ruin of the building overlooking them in a poignant and thought provoking way.

Nearby is Woodbury Hill commanding extensive views south to the Malvern Hills and over the River Teme valley to the west. On the summit is an Iron Age hillfort. Owain Glyndŵr's army of Welsh and French camped here for eight days in the summer of 1405 facing an army of King Henry IV at Abberley Hill. Skirmishes took place but neither large force initiated full scale battle and the Welsh withdrew under nightfall back to Wales. The location was also used as a meeting place during the English Civil War by Clubmen from the local farms and cottages.

The village also is home to the Grade II listed coaching inn The Hundred House Hotel,[3] once the collection point for agricultural tithes from the districts or 'hundred (division)s' of the local area. In this instance the Doddingtree Hundred.

From 1843 to 1846 Queen Adelaide, the widow of King William IV resided at Witley Court. Whilst there she financed the first village school.[4]

Saint Michael and All Angels Church 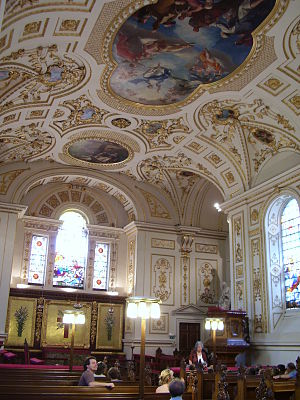 The church, of Saint Michael and All Angels, is a brick building but like the adjoining Witley Court was faced with limestone by the Gloucester architect Samuel Daukes in the 1850s. The interior is one of the finest Italian Baroque churches in Britain originally from Cannons House at Edgware in Middlesex and fitted to Daukes's building by James Gibbs. It was completed in 1735. [6]

It incorporates a richly gilded ceiling with a number of paintings by Antonio Bellucci, a funerary monument to Thomas Lord Foley and his family by John Michael Rysbrack and ten large painted glass windows by Joshua Price dated 1719-1721.[7][8][9]

In 2014 the crypt was reopened to the public, on Saturdays and Sundays. On display is the restored Samuel Thorp clock. The clock was first commissioned by a later Baron Foley in 1804 and served the Court and the Church until 1877 until it was replaced by the present clock. [10]