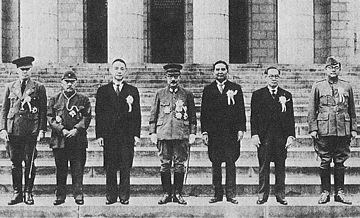 The Conference addressed few issues of any substance, but was intended from the start as a propaganda show piece, to illustrate the Empire of Japan's commitments to the Pan-Asianism ideal and to emphasize its role as the "liberator" of Asia from Western colonialism.[1]

Starting in 1931, Japan had always sought to justify its imperialism under the grounds of Pan-Asianism. In 1941, when Japan went to war with the United States, Britain, Australia, New Zealand, Canada and the Netherlands, the Japanese portrayed themselves as engaging in a war of liberation on behalf of all the peoples of Asia. In particular, there was a marked racism to Japanese propaganda with the Japanese government issuing cartoons depicting the Americans and British as "white devils" or "white demons", complete with claws, fangs, horns and tails.[2] The Japanese government depicted the war as a race war between the benevolent Asians led of course by Japan, the most powerful Asian country against the utterly evil "Anglo-Saxons" led by the U.S. and the British Empire, who were portrayed as sub-human "white devils".[2] At times, Japanese leaders spoke like they believed their own propaganda about whites being in a process of racial degeneration and were actually turning into the drooling, snarling demonical creatures depicted in their cartoons.[3] Thus, the Foreign Minister Yōsuke Matsuoka had stated in a 1940 press conference that "the mission of the Yamato race is to prevent the human race from becoming devilish, to rescue it from destruction and lead it to the light of the world".[4] At least some people within the Asian colonies of the European powers had welcomed the Japanese as liberators from the Europeans. In the Dutch East Indies, the nationalist leader Sukarno in 1942 had created the formula of the "Three A's"-Japan the Light of Asia, Japan the Protector of Asia and Japan the Leader of Asia.[5] For all their Pan-Asian talk about creating a Greater East Asia Co-prosperity Sphere where all the Asian peoples would live together as brothers and sisters, in reality as shown by the July 1943 planning document An Investigation of Global Policy with the Yamato Race as Nucleus, the Japanese saw themselves as the racially superior "Great Yamato race", which was naturally destined to dominate forever the other racially inferior Asian peoples.[6]

Prior to the Greater East Asia Conference, Japan had made vague promises of independence to various anti-colonial pro-independence organizations in the territories it had overrun, but aside from a number of obvious puppet states set up in China, these promises had not been fulfilled. Now, with the tide of the Pacific War turning against Japan, bureaucrats in the Ministry of Foreign Affairs and supporters of the Pan-Asian philosophy within the government and military pushed forward a program to grant rapid "independence" to various parts of Asia in an effort to increase local resistance to and possible return of the western colonial powers and to boost local support for the Japanese war effort. The Japanese military leadership agreed in principle, understanding the propaganda value of such a move, but the level of "independence" the military had in mind for the various territories was even less than that enjoyed by Manchukuo. Several components of the Greater East Asia Co-Prosperity Sphere were not represented. Korea and Taiwan had long been annexed as external territories of the Empire of Japan, and there were no plans to extend any form of political autonomy or even nominal independence. Vietnamese and Cambodian delegates were not invited for fear of offending the Vichy French pro-Nazi regime, which maintained a legal claim to French Indochina and to which Japan was still formally allied. The issue of British Malaya and the Netherlands East Indies was complex. Large portions were under military rule by the Imperial Japanese Army or Imperial Japanese Navy, and the organizers of the Greater East Asia Conference were dismayed by the unilateral decision of the Imperial General Headquarters to annex these territories to the Japanese Empire on May 31, 1943, rather than to grant nominal independence. This action considerably undermined efforts to portray Japan as the "liberator" of the Asian peoples. Indonesian independence leaders Achmed Sukarno and Muhammad Hatta were invited to Tokyo shortly after the close of the Conference for informal meetings, but were not allowed to participate in the Conference itself.[7] In the end, seven countries (including Japan) participated.

There were six "independent" participants and one observer that attended the Greater East Asia Conference.[8] These are:

Strictly speaking, Subhas Chandra Bose was present only as an "observer", since India was still under British rule. Furthermore, the Kingdom of Thailand sent Prince Wan Waithayakon in place of Premier Plaek Pibulsonggram to emphasize that Thailand was not a country under Japanese domination. The Premier was also worried that he might be ousted should he leave Bangkok.[9] Tojo greeted them with a speech praising the "spiritual essence" of Asia, as opposed to the "materialistic civilization" of the West.[10] Their meeting was characterized by praise of solidarity and condemnation of Western colonialism, but without practical plans for either economic development or integration.[11] As Korea had been annexed to Japan in 1910, there was no official Korean delegation to the conference, but a number of leading Korean intellectuals such as the historian Choe Nam-seon, the novelist Yi Kwang-su and the children's writer Ma Haesong attended the conference as part of the Japanese delegation to deliver speeches praising Japan and to express their thanks to the Japanese for colonizing Korea.[12] The purpose of these speeches was to reassure other Asian peoples about their future in a Japanese-dominated Greater East Asia Co-prosperity Sphere. The fact that Choe and Yi had once been Korean independence activists who had been bitterly opposed to the Japanese rule made their presence at the conference a real propaganda coup for the Japanese, as it seemed to show that Japanese imperialism was so beneficial to the peoples subjected to Japan that even those who once been opposed to the Japanese had now seen the errors of their ways.[13] In addition, the Korean speakers strongly condemned the "Anglo-Saxon" powers Britain and the U.S as the most deadly enemies of Asian civilization that had ever existed, and praised Japan as the defender of Asia from the "Anglo-Saxons".[12]

The major theme of the conference was for the need for all the Asian peoples to rally behind Japan and offer an inspiring example of Pan-Asian idealism against the evil "white devils".[14] The American historian John W. Dower wrote that the various delegates "...placed the war in the East-versus-the West, Oriental-versus-the Occidental, and ultimately a blood-versus-blood context."[14] Ba Maw of Burma stated: "My Asian blood has always called out to other Asians...This is not the time to think with other minds, this is the time to think with our blood, and this thinking has brought me from Burma to Japan."[14] General Hideki Tojo of Japan stated in his speech: "It is an incontrovertible fact that the nations of Greater East Asia are bound in every respect by ties of an inseparable relationship".[15] Jose Laurel of the Philippines in his speech claimed that no-one in the world could "stop or delay the acquisition of one billion Asians of the free and untrammelled right and opportunity to shape their own destiny".[16]

The Joint Declaration of the Greater East Asia Conference was published as follows:

It is the basic principle for the establishment of world peace that the nations of the world have each its proper place, and enjoy prosperity in common through mutual aid and assistance.

The United States of America and the British Empire have in seeking their own prosperity oppressed other nations and peoples. Especially in East Asia, they indulged in insatiable aggression and exploitation, and sought to satisfy their inordinate ambition of enslaving the entire region, and finally they came to menace seriously the stability of East Asia. Herein lies the cause of the recent war. The countries of Greater East Asia, with a view to contributing to the cause of world peace, undertake to cooperate toward prosecuting the War of Greater East Asia to a successful conclusion, liberating their region from the yoke of British-American domination, and ensuring their self-existence and self-defense, and in constructing a Greater East Asia in accordance with the following principles:

The conference and the formal declaration adhered to on November 6 was little more than a propaganda gesture designed to rally regional support for the next stage of the war, outlining the ideals of which it was fought.[7] However, the Conference marked a turning point in Japanese foreign policy and relations with other Asian nations. The defeat of Japanese forces on Guadalcanal and an increasing awareness of the limitations to Japanese military strength led the Japanese civilian leadership to realize that a framework based on cooperation, rather than colonial domination would enable a greater mobilization of manpower and resources against the resurgent Allied forces. It was also the start of efforts to create a framework that would allow for some form of diplomatic compromise should the military solution fail altogether.[7] However these moves came too late to save the Empire, which surrendered to the Allies less than two years after the conference. The American historian John W. Dower wrote that Japan's Pan-Asian claims were just a "myth", and that the Japanese were as every bit as racist and exploitive towards other Asians as the "white powers" that they were fighting against, and even more brutal as the Japanese treated their supposed Asian brothers and sisters with an appalling ruthlessness; for an example, many of the Burmese who had welcomed the Japanese as liberators from the British in 1942 had by 1944 come to miss the British, who did not have the casually relaxed attitude towards raping and murdering Burmese that the Japanese held.[18] In 1944-45, the Burmese welcomed the British as liberators from the Japanese. Moreover, the reality of Japanese rule belied the idealistic statements made at the Greater East Asia Conference. Whenever they went, Japanese soldiers and sailors had a routine habit of publicly slapping the faces of other Asians as a way of showing who were the "Great Yamato race" and who were not.[19] During the war, 670, 000 Koreans and 41, 862 Chinese were taken to work as slave labor under the most degrading conditions in Japan; the majority did not survive the experience.[20] About 60, 000 people from Burma, China, Thailand, Malaya, and the Dutch East Indies together with some 15, 000 British, Australian, Indian and Dutch POWs died as slaves building the "Burma Death Railway".[21] The Japanese treatment of slaves was based upon an old Japanese proverb for the proper treatment of slaves: ikasazu korasazu ("do not let them live, do not let them die").[22] In China between 1937–45, the Japanese were responsible for the deaths of between 8 to 9 million Chinese.[23] Between 200, 000-400, 000 young girls, mostly from Korea, but also from other regions of Asia were taken to be used as "comfort women" as sexual slavery was euphemistically known within the Imperial Army and Navy; the "comfort women" were often subjected to horrific physical and sexual abuse.[24] The British writer George Orwell in a radio broadcast commented that: "To those who say the cause of Japan is the cause of Asia against the European races, the best answer is: why then do the Japanese constantly make war against other races who are Asiatics no less than themselves?"[19] A deeply disillusioned Ba Maw later recalled after the war: "The brutality, arrogance, and racial pretensions of the Japanese militarists in Burma remain among the deepest Burmese memories of the war years; for a great many people in South-East Asia these are all they remember of the war."[19]