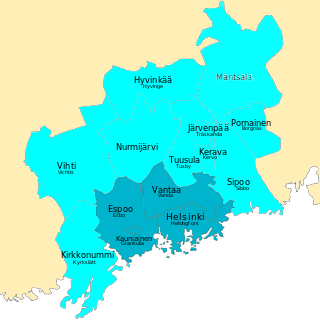 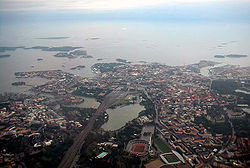 Central Helsinki, the focal point of the Capital Region, from the sky.

These regions are located in the south of Finland, on the coast of the Gulf of Finland, which is part of the Baltic Sea. The smaller region includes Helsinki, Vantaa, Espoo, and Kauniainen and has a population of about 1.1 million. The Greater Helsinki region is the largest urbanised area in the country with 1 402 394[1] inhabitants and is by far the most important economic, cultural, and scientific region of Finland. Seven out of Finland's 17 universities[note 1] and most of the headquarters of notable companies and governmental institutions are located in Greater Helsinki, as is Finland's main airline hub and airport, Helsinki Airport, which is located in Vantaa.

In the strictest sense, the Finnish Capital Region consists of four municipalities with city status, Helsinki, Vantaa, Espoo and Kauniainen, whose total population is about 1.1 million (2014). This area is most often called the Capital region in English, Pääkaupunkiseutu in Finnish, and Huvudstadsregionen in Swedish, although the use of the terms is not especially consistent. The vast majority of the inhabitants live in the urban areas of the cities, but within the boundaries of these cities there are also suburban and rural areas.

Commonly about ten more municipalities are considered to be part of Greater Helsinki, as they can be considered to be commuter towns and exurbs of Helsinki. When Hyvinkää, Järvenpää, Kerava, Kirkkonummi, Nurmijärvi, Sipoo, Tuusula, Mäntsälä, Pornainen and Vihti are included, the number of inhabitants rises to 1.4 million. All of the municipalities belong to the region of Uusimaa. Of these, Kerava, Järvenpää, Mäntsälä, Tuusula, and Nurmijärvi are part of the urban area, as parts of 6 other municipalities. Additionally, the cities of Porvoo, Lohja, and to some extent Riihimäki, which have very close ties, motorway and (in the case of Riihimäki) commuter train accesses, and are fairly close to the capital, are nowadays often included in regional planning, which raises the total population to about 1,550,000.

Statistics Finland define the commuter belt of Helsinki (Helsingin työssäkäyntialue, Helsingfors pendlingsområde) to include a total of 24 municipalities, with a land area of 7,359.80 km2 and a population of 1,431,108 as of 31 December 2007.[3][4] In addition to that, there are people from as far as Lahti and even Tampere commuting to Helsinki daily.

The table below lists population, area, and population density for the largest municipalities of the Greater Helsinki area. (Note that "Helsinki Metropolitan Area" and the other terms used are not firmly established and may vary in different contexts.) The commuter towns of Lohja and Porvoo are not usually included, though, if they were (considering their proximity to Helsinki and their high commuting rate), they would raise the overall population to nearly 1.5 million people.