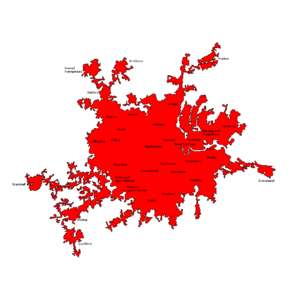 A labelled map of the Greater London Built-up Area 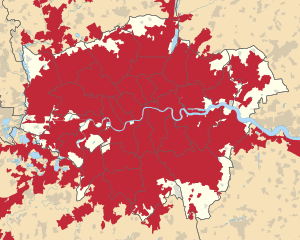 The Greater London Built-up Area or Greater London Urban Area is the conurbation or continuous urban area of London, United Kingdom, as defined by the Office for National Statistics.[1] It had a population of 9,787,426 in 2011 at the time of the census.[1]

It includes most of Greater London, omitting most of its woodland, as well as small, buffered districts, the Lee Valley Park and the two largest sewage treatment works serving London by the River Thames. Outside the administrative boundary it includes contiguous suburban settlements and a few densely populated outliers connected to it by ribbon development. Its outer boundary is constrained by the Metropolitan Green Belt and it is therefore much smaller than the wider metropolitan area of London.[citation needed]

As a selective grouping of relatively low-to-mid density (and some high density) output areas each consisting of roughly 120 households,[2] it can be compared to Greater London which covers 1,572 square kilometres (607 sq mi) and contained 8,173,194 residents at the time of the 2011 census.

The built-up area of London continues beyond the administrative boundary in some places, while stopping short of it in others. For this reason, the density of the Greater London Built-Up Area is 8.3% higher than that of Greater London, the figure for which includes these outlying rural areas (notably in Hillingdon, Enfield, Havering and Bromley). All of both built-up areas is drained ultimately by the River Thames.

At the time of the 2011 Census, the Office for National Statistics defined the Greater London Urban Area as being made up of the following components:.[1]

At the time of the 2001 Census, the Office for National Statistics defined the Greater London Urban Area as being made up of the following components:

Within Greater London there are 33 components corresponding to the City of London and the London boroughs. However, the boundaries are not identical and outlying areas such as Biggin Hill in Bromley are omitted.[6]