From Infogalactic: the planetary knowledge core
Jump to: navigation, search
This article is about the ancient Greeks and the Roman Empire. For the modern form of wrestling, see Greco-Roman wrestling. For the Greek-speaking Eastern Roman Empire, see Byzantine Empire. 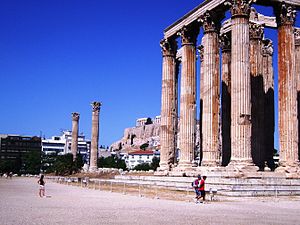 The Temple of Olympian Zeus in Athens, construction started by Athenian tyrants in 6th century BC and completed by Roman emperor Hadrian in 2nd century AD.

The Greco-Roman world, Greco-Roman culture, or the term Greco-Roman (/ˌɡrɛkoʊˈroʊmən/ or /ˌɡrɛkəˈroʊmən/; spelled Graeco-Roman in the United Kingdom and the Commonwealth), when used as an adjective, as understood by modern scholars and writers, refers to those geographical regions and countries that culturally (and so historically) were directly, long-term, and intimately influenced by the language, culture, government and religion of the ancient Greeks and Romans. In exact terms the area refers to the "Mediterranean world", the extensive tracts of land centered on the Mediterranean and Black Sea basins, the "swimming-pool and spa" of the Greeks and Romans, i.e. one wherein the cultural perceptions, ideas and sensitivities of these peoples were dominant.

As mentioned, the term Greco-Roman world describes those regions who were for many generations subjected to the government of the Greeks and then the Romans and thus accepted or at length were forced to embrace them as their masters and teachers. This process was aided by the seemingly universal adoption of Greek as the language of intellectual culture and at least Eastern commerce, and of Latin as the tongue for public management and forensic advocacy, especially in the West (from the perspective of the Mediterranean Sea).

Though these languages never became the native idioms of the rural peasants (the great majority of the population), they were the languages of the urbanites and cosmopolitan elites, and at the very least intelligible (see lingua franca), if only as corrupt or multifarious dialects to those who lived within the large territories and populations outside of the Macedonian settlements and the Roman colonies. Certainly, all men of note and accomplishment, whatever their ethnic extractions, spoke and wrote in Greek and/or Latin. Thus, the Roman jurist and Imperial chancellor Ulpian was Phoenician, the Greco-Egyptian mathematician and geographer Claudius Ptolemy was a Roman citizen and the famous post-Constantinian thinkers John Chrysostom and Augustine were part Syrian and part Berber, respectively. The historian Josephus Flavius was Jewish but he also wrote and spoke in Greek and was a Roman citizen.

Properly speaking, the term "Greco-Roman World" signifies the entire realm from the Atlas Mountains to the Caucasus, from northernmost Britain to the Hejaz, from the Atlantic coast of Iberia to the Upper Tigris River and from the point at which the Rhine enters the North Sea to the northern Sudan. The Black Sea basin, particularly the renowned country of Dacia or Romania, the Tauric Chersonesus or the Crimea, and the Caucasic kingdoms which straddle both the Black and Caspian Seas are deemed to comprehend this definition as well. As the Greek Kingdoms of Western Asia successively fell before the reputedly invincible arms of Rome, and then were gradually incorporated into the universal empire of the Caesars, the diffusion of Greek political and social culture and that of Roman "law and liberty" converted these areas into parts of the Greco-Roman World.

Cores/Domains of the Greco-Roman world 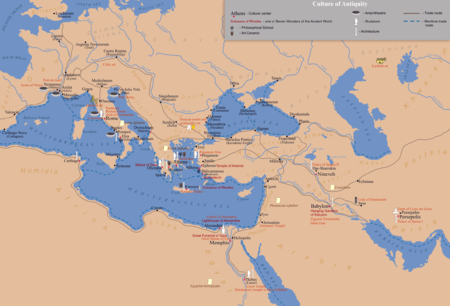 A map of the ancient world, centred on Greece.

Based on the above definition, it can be confidently asserted that the "cores" of the Greco-Roman world were Greece, Cyprus, Italy, the Iberian Peninsula, Asia Minor, Gaul (modern France), Syria, Egypt and Africa Proper (Tunisia and Libya). Occupying the periphery of this world were "Roman Germany" (the Alpine countries and the so-called Agri Decumates, the territory between the Main, the Rhine and the Danube), Illyria and Pannonia (the former Yugoslavia, Albania, and Hungary), and Moesia (roughly corresponds to modern Bulgaria).

The above seems to ignore the major rivalry between the Greco-Romans, during their period of ascendancy, and the great empire to the east, the Persians. See Xenophon,The Anabasis, or, the March Up Country, the Greco-Persian wars, the famous battles of Marathon and Salamis, the Greek tragedy "The Persians" by Aeschylus, Alexander the Great's defeat of the Persian emperor Darius and conquest of the Persian empire, or, the later Roman generals' difficulties with the Persian armies, such as Pompey the Great, and of Marcus Licinius Crassus (conqueror of the slave general Spartacus), who was defeated in the field by a Persian force, and was beheaded by them. (Ref: Appian, The Civil Wars).

In the schools of art, philosophy and rhetoric, the foundations of education were transmitted throughout the lands of Greek and Roman rule. Within its educated class spanning all of the "Greco-Roman" era, the testimony of literary borrowings and influences is overwhelming proof of a mantle of mutual knowledge. For example, several hundred papyrus volumes found in a Roman villa at Herculaneum are in Greek. From the lives of Cicero and Julius Caesar, it is known that Romans frequented the schools in Greece.

The installation, both in Greek and Latin, of Augustus's monumental eulogy, the Res Gestae, is a proof of official recognition for the dual vehicles of the common culture. The familiarity of figures from Roman legend and history in the "Parallel Lives" composed by Plutarch is one example of the extent to which "universal history" was then synonymous with the accomplishments of famous Latins and Hellenes. Most educated Romans were likely bilingual in Greek and Latin.

"Greco-Roman" architecture is architecture of the Roman world that followed the principles and style established in ancient Greece. The most representative building of that era was the temple. Other prominent structures that represented the style included government buildings, like the Roman Senate, and cultural structures, like the Colosseum. The three primary styles of column design used in temples in classical Greece were Doric, Ionic and Corinthian. Examples of Doric architecture are the Parthenon and the Temple of Hephaestus in Athens, while the Erechtheum, which is located right next to the Parthenon is Ionic. Ionic Greco-Roman architecture tend to be more decorative than the formal Doric styles.

The Romans made it possible for individuals from subject peoples to acquire Roman citizenship and would sometimes confer citizenship on whole communities; thus, "Roman" became less and less an ethnic and more and more a political designation.

By 211 AD, with Caracalla's edict known as the Constitutio Antoniniana, all free inhabitants of the Empire became citizens. As a result, even after the Fall of Rome, the people of the empire that remained (later referred to by many historians as the Byzantine Empire) continued to call themselves Romans even though Greek became the main language of the Empire. Rhomaioi continued as what they called themselves (Hellenes referring to pagan Greeks) through the Ottoman and even into modern times.