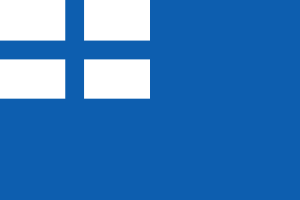 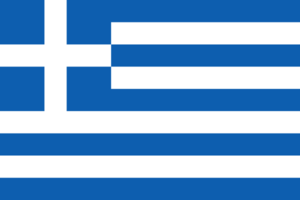 State and Merchant ensign since 1828, with minor changes made throughout the years.

The Hellenic Merchant Marine refers to the Merchant Marine of Greece, engaged in commerce and transportation of goods and services universally. It consists of the merchant vessels owned by Greek civilians, flying either the Greek flag or a flag of convenience. According to Lloyd's List,[1] in 2015, Greece was the first ship owner country in the world in terms of tonnage with a total DWT of 334,649,089 tons and 5,226 Greek owned vessels. Greece is a maritime nation by tradition, as shipping is arguably the oldest form of occupation of the Greeks and a key element of Greek economic activity since the ancient times. Today it is the second largest contributor to the national economy after tourism. The Greek fleet flies a variety of flags, however some Greek shipowners gradually return to Greece following the changes to the legislative framework governing their operations and the improvement of infrastructure.

Greek firms have managed to capture the expansion of Asia, particularly China. It is mostly the dry bulk shipping firms that have benefited from the development, since iron ore and coal are the two major resources that are required for a country's infrastructure to be taken to the next level.

Since 2000, China has provided lucrative contracts both on the spot, and time charter market for dry bulk shipowners. As a result, many new shipping tycoons were created.

Engineer Officers use exactly the same Rank Insignia as Bridge officers. The only difference is that "in between" the golden stripes, the color is not black but dark red. In some cases, dark purple has been used, however dark purple refers usually to Electrician Officers. Engineer Officers come from the same Merchant Marine Academies as Bridge Officers. After graduation from the Marine Academy Bridge Officers undergoing a series of rigorous training in order to spesialize for specific types of ships that they are about to serve on board (LNGC, LPG, VLCC, Dry Cargo, Suezmaxes, Ro/Pax, ULCC etc.) and to meet the stringest requirements of International Conventions (SOLAS, STCW, MARPOL etc.) and Companies Managing Systems. Some of the training includes (but not limited to) the following: Advanced Oil/Gas/Chemical Tanker Training, ECDIS, ISM, ISPS, Heavy Weather Navigation, Cargo Control Systems and Procedures, Navigation Deck Simulators, Electronic Navigation Systems, Integrated Navigation Systems (INS), Radio Communications, Dynamic Positioning Systems (DP), Passage Planning and Procedures etc. All of the above training takes place in Private Marine Education Centers approved by the Hellenic Government and internationally by the IMO. All other Officers found on board Hellenic Merchant Marine Vessels, come from Universities and other higher education institutes.

Other Officers that serve on board Hellenic Merchant Marine vessels are: Economic Officers, Electricians, Doctors and Radio Officers.

No other type of officer can reach these ranks.

Hellenic Merchant Marine Officers get their promotions after a 2 years service period from 2nd Officer rank to Chief Officer rank and after 6 months of studies and exams at the KESEN center. KESEN stands for Center of Further Education and Training of Masters and Officers.

To become Captain is 3 years sea service period and 6 months of studies and exams at the KESEN center.

All other Officers are promoted after evaluations from the Ship Owning Company.

Most Greek shipping has been run as a family business, with family members located in key ports or in key positions, and with marriages cementing relationships between commercial dynasties. These close-knit families have allowed financially sensitive information to be kept within the local community, with many transactions kept within trusted family networks. Some historic shipping families include:

Some notable Greek shipping companies include: