Greek folk music includes a variety of Greek styles played by ethnic Greeks in Greece, Cyprus, Australia, the United States and elsewhere. Apart from the common music found all-around Greece, there are distinct types of folk music, sometimes related to the history or simply the taste of the specific places. 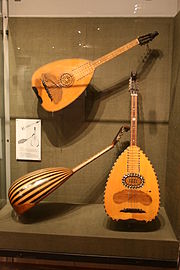 The Greek islands of Kárpathos, Khálki, Kássos and Crete form an arc where the Cretan lyra is the dominant instrument. Kostas Mountakis is probably the most widely-respected master of the lyra, which is often accompanied by the laouto which resembles a mandolin. Bagpipes are often played on Kárpathos. Crete has a well known folk dance tradition, which comes from ancient Greece and includes swift dances like pentozalis and other like sousta, syrtos, trizali, katsabadianos, chaniotikos, siganos, pidichtos Lasithou, maleviziotikos, tsiniaris, ierapetrikos and laziotikos.

The Aegean islands of Greece are known for Nisiótika songs; Greek characteristics vary widely. Although the basis of the sound is characteristically secular-Byzantine, the relative isolation of the islands allowed the separate development of island-specific Greek music. Most of the nisiótika songs are accompanied by lyra, clarinet, guitar and violin. Modern stars include Yiannis Parios and the Konitopouloi; Mariza Koch is credited with reviving the field in the 1970s. Folk dances include the ballos, syrtos, sousta, chiotikos, kalymniotikos, stavrotos, lerikos, kamara, mihanikos, trata, panagia and ikariotikos.

In the Aegean Cyclades, the violin is more popular than Cretan lyra, and has produced several respected musicians, including Nikos Oikonomidis, Leonidas Klados and Stathis Koukoularis. Folk dances in Cyclades include lerikos, syrtos, syrtos Serifou, syrtos Naxou, syrtos Kythnou, Amorgos dance and ballos. One of the most famous singers of cycladic music is Domna Samiou.

In Dodacanese there are prominent elements of Cretan music. Dodecanese folk dances include the trata, ballos, syrtos, kremasti, issos, syrtos Rodou, mihanikos and kalymnikos, with origin from the island of Kalymnos.

In central Greece many folk songs make references to the klephts and their role during the Greek war of independence. Folk dances in central Greece include: antikrystos, syrtaki (Zorba's dance), zeibekiko, hasapiko, kalamatianos, kamilierikos choros, koulouriotikos, syrtos, tsamiko, choros tis tratas, chatzichristos and syrtokalamatianos. The musical tradition of the region is also influenced by the Arvanites.

Main article: Music of the Peloponnese

Folk dances from the Peloponnese include the kalamatianos, kariatidon, monodiplos, tsakonikos, syrtos, Ai Georgis, maniatikos and diplos horos. In the songs there are also references to the klephts. In Mani there is also the tradition of the "μοιρολόγια" mirolóyia (laments), sung by the old women of Mani.

Main articles: Music of the Heptanese and kantádhes 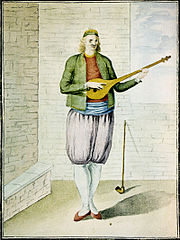 A Greek of the 18th century playing tambouras.

The Ionian Islands were never under Ottoman control and their songs and kantádhes (Greek: καντάδες) are based a lot on the western European style. Greek kantádhes are performed by three male singers accompanied by mandolin or guitar. These romantic songs developed mainly in Kefalonia in the early 19th century but spread throughout Greece after the liberation of Greece. An Athenian form of kantádhes arose, accompanied by violin, clarinet and laouto. However the style is accepted as uniquely Heptanesean. The island of Zakynthos has a diverse musical history with influences also from Crete. Folk dances include the tsirigotikos, leukaditikos, ballos, syrtos, Ai Georgis, Kerkyraikos and kato sto yialo.

The Church music (Byzantine) of the islands is also different from the rest of Greece, with a lot of western and Catholic influences on the Orthodox rite. The region is also notable for the birth of the first School of modern Greek classical music (Heptanesean or Ionian School, Greek:Επτανησιακή Σχολή), established in 1815.

Dionysiakos, take place especially every year, before Easter, in Tyrnavos, where occurs the famous Phallus Festival; a pagan fertility festival in honour of the ancient God Dionysus, with food and drink.

Instruments used in ancient Thracian music such as Bagpipes (gaida) and Byzantine lyra are still the ordinary instruments of folk music in Thrace. Folk dances include the tapeinos horos, tripati, tromakton, sfarlis, souflioutouda, zonaradiko, kastrinos, syngathistos, sousta, mantilatos, baintouska and apadiasteite sto xoro. Traditional Thracian dances are usually swift in tempo and are mostly circle dances in which the men dance at the front of the line. The gaida, a kind of bagpipe, is the most characteristic instrument, but clarinets and toubeleki are also used. The Thracian gaida, also called avlos, is different from the Macedonian or other Bulgarian bagpipes. It is more high in pitch than the Macedonian gaida but less so than the Bulgarian gaida (or Dura). The Thracian gaida is also still widely used throughout Thrace in northeastern Greece. 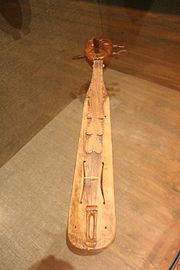 Pontic music retains elements of the musical traditions of ancient Greece, Byzantine music and the tradition of Caucasus. The prime instruments in Pontic music are the Pontic lyra (Kemenche), which has origins in Byzantine times and it is related closely with the Byzantine lyra and Cretan lyra. They are used also other bowed musical instrument from the West, like the Kit violin and Rebec. Other instruments include drums, lute, askomandoura (a type of bagpipe), davul and aulos. Folk dances from Pontus include the atsiapat, dipat, tik, tik diplon, tromakton, Pontiaki serra, ikosiena, trygona, tsestos and zonaradiko.

The most known Greek dance and rhythm is hasapikos. It is originated in the Middle Ages as a battle mime with swords, adopted by the Byzantine military. In Greek it was called μακελλάριος χορός (makellarios horos). Hasapiko served as one of the bases for the sirtaki and it is danced all over Greece.

Cyprus is an independent country, currently contested between the Republic of Cyprus and the internationally unrecognized Turkish Republic of Northern Cyprus. Cyprus includes a variety of classical, folk and popular genres. Cypriot folk music is similar to the folk music of Greece and includes dances like sirtaki, syrtos, tatsia, antikristos and zeimbekiko.