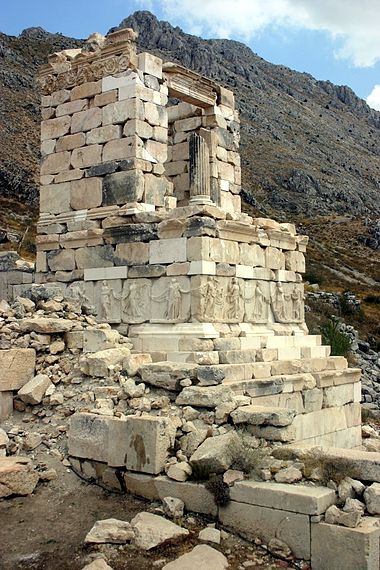 Ruins of a hero-shrine or heroon at Sagalassos, Turkey

Hero cults were one of the most distinctive features of ancient Greek religion. In Homeric Greek, "hero" (ἥρως, hḗrōs) refers to a man who was fighting on either side during the Trojan War. By the historical period, however, the word came to mean specifically a dead man, venerated and propitiated at his tomb or at a designated shrine, because his fame during life or unusual manner of death gave him power to support and protect the living. A hero was more than human but less than a god, and various kinds of supernatural figures came to be assimilated to the class of heroes; the distinction between a hero and a god was less than certain, especially in the case of Heracles, the most prominent, but atypical hero.[1]

The grand ruins and tumuli remaining from the Bronze Age gave the pre-literate Greeks of the 10th and 9th centuries BC a sense of a grand and vanished age that was reflected in the oral epic tradition, which would be crystallized in the Iliad. Copious renewed offerings begin to be represented, after a hiatus, at sites like Lefkandi,[2] even though the names of the grandly buried dead were hardly remembered. "Stories began to be told to individuate the persons who were now believed to be buried in these old and imposing sites," observes Robin Lane Fox.[3]

Greek hero-cults were distinct from the clan-based ancestor worship from which they developed,[4] in that as the polis evolved, they became a civic rather than familial affair, and in many cases none of the worshipers traced their descent back to the hero any longer: no shrine to a hero can be traced unbroken from Mycenaean times. Whereas the ancestor was purely local, Lewis Farnell observed, the hero might be tended in more than one locality, and he deduced that hero-cult was more deeply influenced from the epic tradition, that "suggested many a name to forgotten graves",[5] and provided even Dorians a connection to Mycenaean heroes, according to Coldstream.[6] "Coldstream believed the currency of epic would account for votives in Dorian areas, where an alien, immigrant population might otherwise be expected to show no particular reverence for Mycenaean predecessors".[7] Large Mycenaean tholos tombs that betokened a grander past, were often the site of hero-cults. Not all heroes were even known by names. 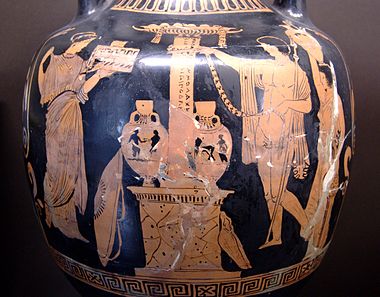 Aside from the epic tradition, which featured the heroes alive and in action rather than as objects of cultus,[8] the earliest written reference to hero-cult is attributed to Dracon, the Athenian lawgiver of the late seventh century BC, who prescribed that gods and local heroes should both be honoured according to ancestral custom. The custom, then, was already established, and there were multiple local heroes.[9] The written sources emphasise the importance of heroes' tombs and the temenos or sanctuary, where chthonic rites appeased their spirits and induced them to continue to favour the people who looked to them as founders, of whom founding myths were related. In the hero's restricted and local scope he "retained the limited and partisan interests of his mortal life. He would help those who lived in the vicinity of his tomb or who belonged to the tribe of which he himself was the founder," observes Robert Parker,[10] with the reservation that Heracles, with his pan-Hellenic scope was again the exception.

Whitley interpreted the final stage, in which hero-cult was co-opted by the city-state as a political gesture, in the archaic aristocratic tumulus surrounded by stelae, erected by Athens to the cremated citizen-heroes of Marathon (490 BC), to whom chthonic cult was dedicated, as the offering trenches indicate.[11] On the other hand Greek heroes were distinct from the Roman cult of dead emperors, because the hero was not thought of as having ascended to Olympus or become a god: he was beneath the earth, and his power purely local. For this reason hero cults were chthonic in nature, and their rituals more closely resembled those for Hecate and Persephone than those for Zeus and Apollo: libations in the dark hours, sacrifices that were not shared by the living.

The two exceptions to the above were Heracles and Asclepius, who might be honored as either heroes or gods, with chthonic libation or with burnt sacrifice. Heroes in cult behaved very differently from heroes in myth. They might appear indifferently as men or as snakes, and they seldom appeared unless angered. A Pythagorean saying advises not to eat food that has fallen on the floor, because "it belongs to the heroes". Heroes if ignored or left unappeased could turn malicious: in a fragmentary play by Aristophanes, a chorus of anonymous heroes describe themselves as senders of lice, fever and boils.

Some of the earliest hero and heroine cults well attested by archaeological evidence in mainland Greece include the Menelaion dedicated to Menelaus and Helen at Therapne near Sparta, a shrine at Mycenae dedicated to Agamemnon and Cassandra, another at Amyklai dedicated to Alexandra, and another in Ithaca's Polis Bay dedicated to Odysseus. These all seem to date to the 8th century BC.[12] The cult of Pelops at Olympia dates from the Archaic period.

Hero cults were offered most prominently to men, though in practice the experience of the votary was of propitiating a cluster of family figures, which included women who were wives of a hero-husband, mothers of a hero-son (Alcmene and Semele), and daughters of a hero-father.[13] As Finley observed of the world of Odysseus, which he reads as a nostalgic eighth-century rendering of traditions from the culture of Dark Age Greece,

Penelope became a moral heroine for later generations, the embodiment of goodness and chastity, to be contrasted with the faithless, murdering Clytaemnestra, Agamemnon's wife; but 'hero' has no feminine gender in the age of heroes.[14]

Where local cult venerated figures such as the sacrificial virgin Iphigeneia, an archaic local nymphe has been reduced to a mortal figure of legend. Other isolated female figures represented priestess-initiators of a local cult. Iconographic and epigraphal evidence marshalled by Larson combine to depict heroines as similar in kind to heroes, but in androcentric Greek culture,[15] typically of lesser stature. 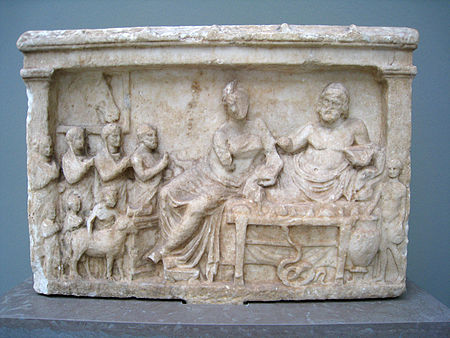 Offerings to a deified hero and another deity, depicted on a Greek marble relief ca. 300 BC

Hero cults could be of the utmost political importance. When Cleisthenes divided the Athenians into new demes for voting, he consulted Delphi on what heroes he should name each division after. According to Herodotus, the Spartans attributed their conquest of Arcadia to their theft of the bones of Orestes from the Arcadian town of Tegea. Heroes in myth often had close but conflicted relationships with the gods. Thus Heracles's name means "the glory of Hera", even though he was tormented all his life by the queen of the gods. This was even truer in their cult appearances. Perhaps the most striking example is the Athenian king Erechtheus, whom Poseidon killed for choosing Athena over him as the city's patron god. When the Athenians worshiped Erechtheus on the Acropolis, they invoked him as Poseidon Erechtheus.