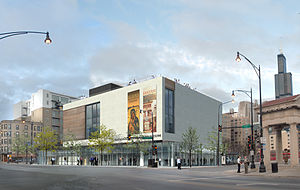 Greektown is a dining and nightlife district on the Near West Side of the American city of Chicago, Illinois. It is one of many neighborhoods that make up the Near West Side community area, and is popular with tourists and Chicago residents alike.

Greektown's bars and restaurants lie roughly between Van Buren and Madison Streets, along Halsted Street, west of the Loop. 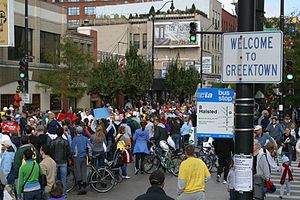 The area once had a large Greek American population, but many residents have left the neighborhood, spreading throughout Chicago and the suburbs. Today, Greektown consists mostly of restaurants and businesses, although a cultural museum[1] and an annual parade and festival[2] highlight the continuation of Greek heritage in Chicago, and — unlike such Chicago neighborhoods as Pilsen and Little Italy, which have lost their original ethnic character — it remains essentially Greek.[citation needed]

On the night of January 31, 2010, a 4-alarm fire ravaged Costa's Restaurant, affecting two nearby stores. The restaurant is now considered a write-off. One of the businesses that was destroyed in that fire, Greektown Music, has since reopened on Halsted street next door to Artopolis Cafe & Bakery.

The current Greektown location dates to the 1960s; it replaced Chicago's original Greek neighborhood, known as "The Delta," which was displaced by the University of Illinois at Chicago.[2]

Greektown is easily accessible via public transportation by riding the Chicago Transit Authority's Blue Line to the UIC-Halsted station and heading north, or via the Halsted bus line.