From Infogalactic: the planetary knowledge core
Jump to: navigation, search
This article is about the mountain range in Vermont. For other uses, see Green Mountain (disambiguation). 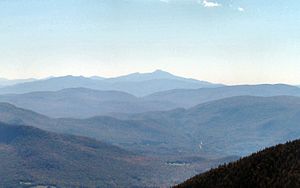 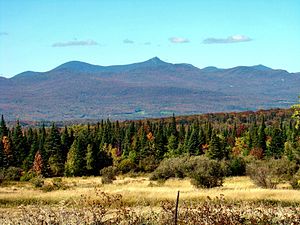 Jay Peak is located at the northern end of the Green Mountains in Vermont. 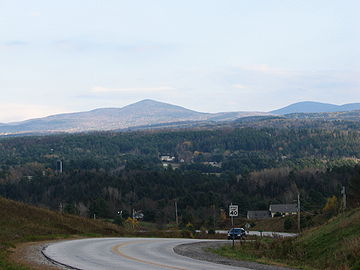 The Green Mountains outside of Montpelier, Vermont

The Green Mountains are a mountain range in the U.S. state of Vermont. The range runs primarily south to north and extends approximately 250 miles (400 km) from the border with Massachusetts to that with Quebec, Canada. The part of the range that is in Massachusetts is known as The Berkshires,[1] and the part in Quebec is called the Sutton Mountains, or Monts Sutton.[2]

All mountains in Vermont are often referred to as the "Green Mountains". However, other ranges within Vermont, including the Taconics — in southwestern Vermont's extremity — and Northeastern Highlands, are not geologically part of the Green Mountains.

The best-known mountains – for reasons such as high elevation, ease of public access by road or trail (especially the Long Trail and Appalachian Trail), or with ski resorts or towns nearby – in the range include:[3]

The Green Mountains are part of the Appalachian Mountains, a range that stretches from Quebec in the north to Alabama in the south. 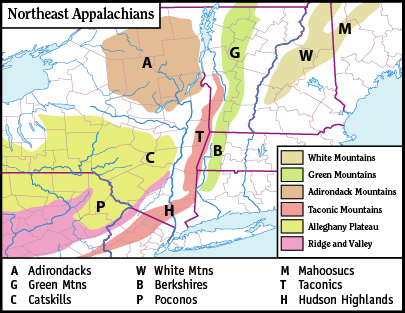 Map of the main regions of the northern Appalachians

The Green Mountains are part of the New England/Acadian forests ecoregion.[6]

Some of the mountains are developed for skiing and other snow-related activities. Others have hiking trails for use in summer.[7] Mansfield, Killington, Pico, and Ellen have downhill ski resorts on their slopes. All of the major peaks are traversed by the Long Trail, a wilderness hiking trail that runs from the southern to northern borders of the state and is overlapped by the Appalachian Trail for roughly 1⁄3 of its length.

The Vermont Republic, also known as the Green Mountain Republic,[8] existed from 1777 to 1791, at which time Vermont became the 14th state.

Vermont not only takes its state nickname ("The Green Mountain State") from the mountains, it is named after them. The French Verts Monts is literally translated as "Green Mountains". This name was suggested in 1777 by Dr. Thomas Young, an American revolutionary and Boston Tea Party participant. The University of Vermont and State Agricultural College is referred to as UVM, after the Latin Universitas Viridis Montis (University of the Green Mountains).[9]

Lemon Fair runs through the towns of Orwell, Sudbury, Shoreham, Bridport, and Cornwall, Vermont, before flowing into Otter Creek.[citation needed][clarification needed] The story is that its name derives from early English-speaking settlers' phonetic approximation of 'Les Monts Vert'.[citation needed]