The Green New Deal is a package of policy proposals that aims to address global warming, and financial crises. The term refers to the New Deal, the social and economic stimulus package undertaken by US President Franklin D. Roosevelt to battle the Great Depression,[1] and combining it with more contemporary approaches such as investment in renewable energies and the promotion of greater resource efficiency.[2]

New Deal - use of synthetic fertilizers to boost agricultural production 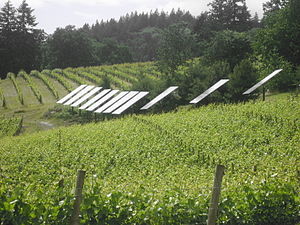 An early influential use of the term Green New Deal, which gave it prominence in the US and well beyond, was by journalist Thomas L. Friedman who, in 2007, argued in favor of such concepts in two pieces that appeared in the New York Times and The New York Times Magazine, respectively.[3][4]

If you have put a windmill in your yard or some solar panels on your roof, bless your heart. But we will only green the world when we change the very nature of the electricity grid -- moving it away from dirty coal or oil to clean coal and renewables. And that is a huge industrial project -- much bigger than anyone has told you. Finally, like the New Deal, if we undertake the green version, it has the potential to create a whole new clean power industry to spur our economy into the 21st century.[5]

Subsequently, this approach was taken up by the Green New Deal Group[6] that published its eponymous report on July 21, 2008.[7]

The concept was further popularized and put on a wider footing, when the United Nations Environment Programme (UNEP) began to promote it. On October 22, 2008 UNEP's Executive Director Achim Steiner unveiled the Global Green New Deal initiative that aims to create jobs in "green" industries, thus boosting the world economy and curbing climate change at the same time.[8]

Broadly, the proposals for a Green New Deal echo the recommendations of UN-mandated organizations such as ICLEI or the TEEB, of global NGOs, and of the Basel II and related monetary accords, especially as these relate to reforms to measurement of fundamental ecosystem risk and financial liabilities. The reinsurance industry has also expressed support for the general principles of global carbon and emissions charges, for metrics of ecosystem destabilization risk, and for raising the price companies and individuals have to pay when using nature's services and natural resources.

Several measures proposed as part of a Green New Deal have already been implemented in one or more G8 or G20 countries including Norway, South Korea, the UK, Germany, and the US. The financial proposals echo some of the programs already underway at the IMF, World Bank, BIS and ECB that aim to better reflect the value of ecosystems and reduce systematic incentives to invest in "dirty" or destructive industries.

Some developing countries have argued that a global Green New Deal may undermine national sovereignty regarding a country's control over its natural resources. Brazil, Mexico, and India have emphasized national sovereignty when discussing the Green New Deal, with India also expressing fears of a green "economic straitjacket". Bolivia, on its part, has argued that a Green New Deal may signal the "privatization and commodification of nature".[19] China, while voicing some support for a Green New Deal, also pointed out that it may result in "trade protectionism under the pretext of environmental protection".