Greenwich Park is a former hunting park in Greenwich and one of the largest single green spaces in south-east London. One of the Royal Parks of London, and the first to be enclosed (in 1433), it covers 74 hectares (180 acres),[1] and is part of the Greenwich World Heritage Site. It commands fine views over the River Thames, the Isle of Dogs and the City of London. The park is open from 06:00 for pedestrians (and 07:00 for traffic) all year round and closes at dusk. 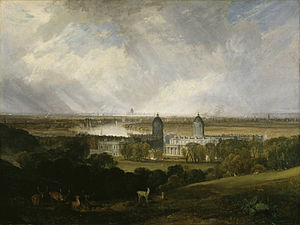 London from Greenwich Park, in 1809, by William Turner

The estate of some 200 acres (81 ha) was originally owned by the Abbey of St. Peter at Ghent, but reverted to the Crown in 1427 and was given by Henry VI to his uncle Humphrey, Duke of Gloucester.[2] He built a house by the river, Bella Court, and a small castle, called Greenwich Castle as well as Duke Humphrey’s Tower, on the hill. The former evolved first into the Tudor Palace of Placentia and then into the Queen's House and Greenwich Hospital. Greenwich Castle, by now in disrepair, was chosen for the site of the Royal Observatory by Charles II in 1675.

In the 15th century the park was mostly heathland and probably used for hawking. In the next century, deer were introduced by Henry VIII for hunting, and a small collection of deer is maintained today in an area to the south east. James I enclosed the park with a brick wall, twelve feet high and two miles (3 km) long at a cost of £2000, much of which remains and defines the modern boundary.

In the 17th century, the park was landscaped, possibly by André Le Nôtre who is known at least to have designed plans for it. The public were first allowed into the park during the 18th century. Samuel Johnson visited the park in 1763 and commented “Is it not fine?”. The famous hill upon which the observatory stands was used on public holidays for mass ‘tumbling’.

In the 1830s a railway was nearly driven through the middle of the lower park on a viaduct but the scheme was defeated by intense local opposition. However, the London and Greenwich Railway was later extended beneath the ground via a cut-and-cover tunnel link between Greenwich and Maze Hill which opened in 1878 (the tunnel alignment is on the north side of the northern side of the park's boundary wall, running beneath the gardens of the National Maritime Museum and Queen's House).

In 1888 the park got a station of its own when Greenwich Park railway station was opened. The station was not successful, with most passengers preferring the older Greenwich station, and in 1917 Greenwich Park station and the associated line closed.

Greenwich Park was used for outdoor London scenes including representing the street, Constitution Hill in the 2009 film The Young Victoria starring Emily Blunt and Rupert Friend.

The park is roughly rectangular in plan with sides 1000 metres by 750 metres and oriented with the long sides lying NNW to SSE. In what follows this direction is taken to be N to S for ease of exposition. It is located at grid reference TQ390772.

The park stretches along a hillside and is on two levels. The lower level (closest to the Museum, Queen's House and, beyond them, the Thames) lies to the north; after a steep walk uphill, there is a flat expanse that is, essentially, an enclosed extension of the plateau of Blackheath.

Roughly in the centre, on the top of the hill, is the Royal Observatory, Greenwich. To the north is the National Maritime Museum and Queen's House, and beyond those Greenwich Hospital. To the east is Vanbrugh Castle. To the south is Blackheath and in the south western corner is the Ranger's House, looking out over heath. To the west lie the architecturally fine streets of Chesterfield Walk and Croom’s Hill (Pevsner 1983). 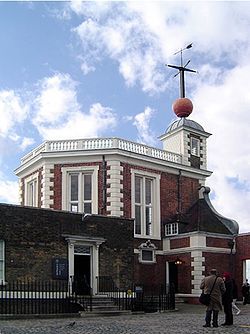 The Observatory is on the top of the hill. Outside is a statue of General James Wolfe in a small plaza from which there are majestic views across to the former Greenwich Hospital (the Old Royal Naval College and now the University of Greenwich) and then towards the river, the skyscrapers of Canary Wharf, the City of London to the northwest and the Millennium Dome to the north. 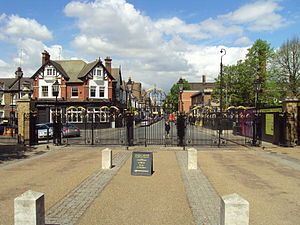 On the lower level of the park there is a popular children's playground (north-east corner, close to Maze Hill railway station) and an adjacent boating lake. There is also a herb garden (close by entrance to Greenwich town centre).

On the upper level, there is an extensive flower garden complete with large duck pond, a rose garden, a cricket pitch, many 17th century chestnut trees with gnarled, swirling trunks, tennis courts, a bandstand, Roman remains, an ancient oak tree (the 'Queens Oak', associated with Queen Elizabeth I) and an enclosure ('The Wilderness') housing some wild deer.

Nestling just behind the Observatory is the garden of the former Astronomer Royal, a peaceful secluded space which is good for picnics and also sometimes used by theatre groups (Midsummer Night's Dream, etc.). On the opposite side (i.e., just south of the Wolfe statue) is the Park Café. There is another, smaller café by the north west gate.

It is possible to park (pay and display) in areas along the main roads entering from Blackheath. Cycle routes criss-cross the park (as do runners, roller-bladers, dog-walkers, etc.), but other road traffic (cars and motor-cycles only) can only use the park road linking Blackheath and Greenwich at peak periods on weekdays.

The use of Greenwich Park for Olympic equestrian events caused some tension between the London Organising Committee for the Olympic and Paralympic Games 2012 (LOCOG) and some local area residents. A community action group, NOGOE (No to Greenwich Olympic Equestrian Events), believed Greenwich Park was not a suitable venue for the events and started an (ultimately unsuccessful) petition to get the equestrian events relocated; by February 2009 this had gathered over 12,000 signatures.[3]

The park also staged the start of the final stage of the 2006 Tour of Britain cycle race (3 September).

One of three start points for London Marathon, the 'red start', is located in southern Greenwich Park, close to Charlton Way.[4] The London Half-Marathon, Run to the Beat, passed through the park from 2008 to 2012; in 2013, the last running of the 13.1-mile event started and finished in the park.[5]