Greenwood Lake is a village in Orange County, New York, United States. As of the United States 2010 Census, the village population was 3,514. It is part of the Poughkeepsie–Newburgh–Middletown, NY Metropolitan Statistical Area as well as the larger New York–Newark–Bridgeport, NY-NJ-CT-PA Combined Statistical Area.

The Village of Greenwood Lake is in the south part of the Town of Warwick.

The Village of Greenwood Lake was originally settled as a farming community in the 1700s in the area of an earlier village occupied on almost exactly the same spot by the Munsee Indians. The Munsees, generally considered a branch of the "Lenape" people, were Algonquin speakers who called the lake "Quampium." Some of the farms at the head of the lake were purchased by the Morris Canal and Banking Company in 1837, and portions of them were inundated when a dam was built that same year, greatly increasing the size of the lake to its current condition. The enlarged lake attracted tourists, and a grand hotel operated by Theron Felter was operating within the area of the Village by at least 1851. The development of the village itself dates to 1856, when most of the available land was purchased by Solomon Caldwell, who divided the land for sale as “hotels, villa sites and town lots.” Subsequent plot plans suggested renaming the community the “Town of Avington” in 1884, and “Montelac Park” in 1890, but it remained Greenwood Lake, becoming incorporated as a village in 1924. In the ensuing years many famous people, such as Babe Ruth and Greta Garbo, regularly visited the resort.

In July 2011, Rob Reiner began shooting a movie in the Village of Greenwood Lake. The movie, "The Magic of Belle Isle" starred Morgan Freeman, Virginia Madsen and Kenan Thompson.[1] The movie was shot in existing homes on the lake. Most of the cast and crew rented homes in the village and stayed there during the shooting.[citation needed] A special free premiere showing was held for all residents of Greenwood Lake in the summer of 2012 at the Thomas P. Morahan Waterfront Park. 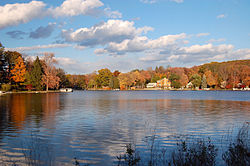 Greenwood Lake is located at Lua error in Module:Coordinates at line 668: callParserFunction: function "#coordinates" was not found..[2]

The village is at the north end of a lake called Greenwood Lake, which straddles the New York State and New Jersey border.

The northern junction of NY-210 (Jersey Avenue/Windemere Avenue) is at NY-17A in the village.

There were 1,332 households out of which 34.4% had children under the age of 18 living with them, 50.7% were married couples living together, 11.1% had a female householder with no husband present, and 34.1% were non-families. 26.7% of all households were made up of individuals and 7.6% had someone living alone who was 65 years of age or older. The average household size was 2.56 and the average family size was 3.18.