Rusedski was born in Montreal, Quebec, Canada to an English mother and a German-born father of Polish–Ukrainian descent.[3] He was a very promising junior player in Canada in the 1980s and subsequently caused some anger in Canada when he decided to adopt British citizenship and play for Britain in 1995.[4] Rusedski has been with his wife Lucy Connor since 1991, when they met while he was competing in a junior tournament where she was a ball girl.[5] They married in a Roman Catholic ceremony at Douai Abbey in West Berkshire in December 1999.[6] They have two children: a daughter born in 2006[7] and a son born in 2009.[8] Rusedski is an Arsenal football supporter.[9] 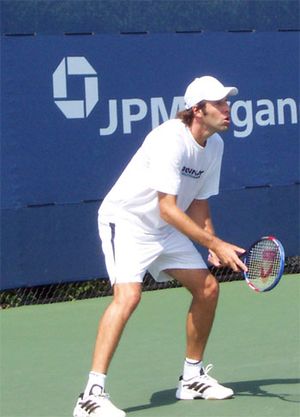 Rusedski's first career singles tournament title was at the Hall of Fame Championship in Newport, Rhode Island in 1993.

Rusedski reached the singles final of the US Open in 1997, where he lost to Pat Rafter in four sets (shortly thereafter reaching his career high rank of World No. 4). He also won the BBC Sports Personality of the Year Award.

In 1998, Tim Henman eclipsed Rusedski as the UK number 1 tennis player. Rusedski, however, won the Grand Slam Cup in 1999.

Rusedski was defeated in the second round of Wimbledon in 2005 by Joachim Johansson of Sweden, 6–7, 6–3, 4–6, 6–7. Following that disappointment, Rusedski had a successful July. He defended his title at the Hall of Fame Championship, defeating Vince Spadea in the final. This was the first time he had successfully defended a title and the third time he had won the championship. He then reached the semifinals at both the RCA Championships in Indianapolis, losing to Taylor Dent, and the Canada Masters tournament in Montreal, losing to Andre Agassi.

Towards the end of 2005, Rusedski's ranking had risen to the high thirties. A poor end to the year by Henman almost allowed Rusedski to overtake him as UK number 1 again. However, a defeat for Rusedski in the first round of the Challenger Event in Dnepropetrovsk, Ukraine, left him ranked 38th, just one place short of regaining the UK top spot. Rusedski finally reclaimed the UK number 1 spot on 15 May 2006, overtaking Andy Murray by getting to the third round of the Rome Masters Event. But Rusedski lost the top UK rankings after a first-round exit at Wimbledon.

On 7 April 2007, Rusedski officially retired from tennis after partnering with Jamie Murray to a doubles victory over the Netherlands in a Davis Cup match, a result which gave Great Britain a winning 3–0 lead in the tie. He announced his retirement immediately after the win during a live interview with Sue Barker on BBC Television.[10] Rusedski has stayed involved with professional tennis in his retirement, and currently works for the Lawn Tennis Association as a talent and performance ambassador.[11] Rusedski held the record for fastest serve at 149 miles per hour until Andy Roddick broke it.[12][13]

On 25 January 2009, Rusedski announced a shock return to professional tennis. However, he was denied an opportunity to compete in his much-loved Davis Cup.[14][15][16] Because of this, Rusedski quickly retracted his announcement and is still retired.

Rusedski was often overshadowed in the British press by the more popular Henman, especially at Wimbledon.[17] It is arguable who had the better playing career. Rusedski won more singles titles than compatriot Henman, with 15 singles titles compared to Henman's 11. Rusedski also reached the final of the US Open in 1997, whereas Henman never made it past the semifinals of a Grand Slam tournament. However, Henman reached six Grand Slam semifinals and an additional four quarterfinals, whereas Rusedski reached just two Grand Slam quarterfinals in total: his US Open final performance, and at Wimbledon (also in 1997), a venue where he consistently under-performed. Neither Rusedski nor Henman ever reached the quarterfinals of the Australian Open. Henman reached the semifinals of the French Open, while Rusedski never made it past the fourth round at that tournament.

Rusedski's Davis Cup singles record was also considerably poorer than Henman's. In Great Britain's two key Davis Cup ties in the World Group knockout stage, Rusedski lost all four singles rubbers, despite home advantage (against the USA in 1999 and Sweden in 2002). Rusedski and Henman were, however, a formidable doubles partnership, winning tournaments together, and vital matches in Davis Cup.

Henman shares a birthday with Rusedski; Henman is exactly a year younger.

It was perhaps fitting that Rusedski's final match at a Major was against his old rival and compatriot Tim Henman, at the 2006 US Open. After a competitive first set, where Rusedski was edged out by Henman in a tie-break, Henman dispatched his opponent, 7–6, 6–2, 6–3. This did turn out to be Rusedski's final match in a major, and it was against a man with whom he not only competed on a tennis court, but also off it for the affection of his home fans. In their head-to-head encounters, Henman won 8–2.

In the 2002 US Open, after losing to Pete Sampras in the third round after a gruelling five-set match, Rusedski described Sampras as "a half-step slow" and predicted that Sampras would lose his fourth-round match to young German star Tommy Haas.[18] Sampras, however, went on to win the tournament.

At Wimbledon in 2003, Rusedski was playing in a second round match against Andy Roddick. Roddick had won the first two sets but Rusedski was 5-2 up in the third set. During a point on Roddick's service game, a member of the crowd loudly called one of Roddick's shots long, causing Rusedski to stop playing the point as he believed it was a line judge. The umpire ruled that the ball was good and that, as Roddick's next shot landed in court, Roddick was awarded the point. Rusedski, believing the point should have been replayed, launched into a long and expletive-riddled tirade at the umpire and, never regaining his composure, went on to lose the next five games without reply to concede the match. Rusedski apologised after the match and Roddick reached the semi-finals.[19][20]

Rusedski has an active media career, having written columns for The Sun,The Daily Mirror[23] and The Daily Telegraph. He also works for the television channel British Eurosport providing analysis during the stations coverage of the Australian Open. He provides commentary and analysis for Sky Sports for their coverage of the US Open and ATP World Tour Events, and for the BBC's coverage of Wimbledon.[23] He has done some acting, appearing in an episode of Agatha Christie's Marple as a tennis player.[24] In 2008, he appeared as a contestant on the reality TV shows Dancing On Ice and Beat the Star. He has also appeared in "dictionary corner" on the Channel 4 "letters and numbers" game show Countdown.

(W) Won tournament; reached (F) final, (SF) semifinal, (QF) quarterfinal; (R#) rounds 4, 3, 2, 1; competed at a (RR) round-robin stage; reached a (Q#) qualification round; (A) absent from tournament; played in a (Z#) Davis/Fed Cup Zonal Group (with number indication) or (PO) play-off; won a (G) gold, (F-S) silver or (SF-B) bronze Olympic medal; a (NMS) downgraded Masters Series/1000 tournament; or (NH) tournament not held.
To avoid confusion and double counting, these charts are updated either at the conclusion of a tournament, or when the player's participation in the tournament has ended.