He started cycle racing at the age of 19, having previously played football as a goalkeeper.[2]

Van Avermaet's breakthrough year as a professional came in 2007 where he had 4 notable victories and a number of good placings on recognized races as it was his first year on major team Predictor–Lotto.

In 2012, Avermaet came very close to winning the World Tour race Grand Prix Cycliste de Québec. He placed a strong attack in the steep Côte de la Montagne, with about 4 kilometres (2.5 mi) to cover and he was followed by Simon Gerrans (Orica–GreenEDGE). The pair built a sizable gap with the peloton and contested the slightly uphill sprint where Gerrans prevailed.[3]

In 2013, Van Avermaet won the Fleming of the Year Award thanks to his consistency in high profile races along with Chris Froome, who won the International version.[4]

In 2014, Van Avermaet started the season strongly by taking second places in both the Omloop Het Nieuwsblad and the Tour of Flanders. He participated in the Tour de France and helped his leader Tejay van Garderen to a fifth place overall.[5] Later in the campaign, Van Avermaet finished for the third year in a row inside the top 5 of the Grand Prix Cycliste de Québec. He attacked on the final rise, but folded near the line.[6] In September, Van Avermaet earned a prestigious victory at the 1.HC Grand Prix de Wallonie. He was part of a 4 rider move that broke clear with 20 km to go, and with the peloton on their heels, Van Avermaet attacked in the final bends to cross the line first.[7] A couple of days later, he won the GP Impanis-Van Petegem. It was later revealed in October that Van Avermaet had won the Flandrian of the year award for the second season in a row.[8] 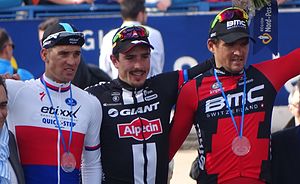 In 2015, Van Avermaet placed second of the Strade Bianche behind Zdenek Stybar.[9] He got his first victory of the season on Stage 3 of Tirreno–Adriatico by winning the sprint of a small group.[10] In April, he went on to get the third step of the podium in the Tour of Flanders after dropping Peter Sagan while chasing for the winning duet in the finale.[11] A week later, he had a prestigious podium placing at Paris–Roubaix, finishing third after being on the attack for the final kilometers.[12] Despite being under investigation for doping at that time (see section below), Van Avermaet participated in the Amstel Gold Race and finished fifth.[13] On 31 May 2015, Van Avermaet won both the final stage in the Tour of Belgium as well as the general classification.[14] He took part in the Tour de Suisse, finishing sixth of the Prologue, third of Stage 4.[15]

Van Avermaet was selected to ride the 2015 Tour de France, and helped BMC win the time time trial on Stage 9. On 17 July 2015, Van Avermaet won his first individual Tour stage on Stage 13 from Muret to Rodez. He out sprinted green jersey wearer Peter Sagan and fellow Belgian cyclist Jan Bakelants on an uphill finish.[citation needed] He pulled out of the race three days later due to his partner giving birth.[16]

On August 1, 2015 Van Avermaet attacked on the final climb of the Clásica de San Sebastián to lead the race ahead of the chasing Adam Yates (Orica GreenEDGE), but towards the top he was hit from behind by one of the motorbikes providing television coverage of the race. He was knocked to the ground and the frame of the bike was broken; Van Avermaet was unable to finish the race.[17] In the aftermath of the incident he claimed the crash cost him victory, and his BMC team threatened legal action over “millions of dollars in lost publicity”.[18]

In April 2015 the Royal Belgian Cycling League requested a two-year ban for Van Avermaet, the disqualification of all his results during the 2012 season and a €262,500 fine following an investigation into suspected anti-doping offences. It was reported in the Belgian media that their accusations focused on allegations of Van Avermaet's use of the corticoid Diprophos, and Vaminolact, a fortified baby food which is banned from being injected.[19][20] On 7 May 2015, it was announced that Avermaet was cleared of all allegations.[21]

This chart shows Greg Van Avermaet progress in the classics he mostly participated in.