A grenade launcher or grenade discharger is a weapon that launches a specially-designed grenade or a grenade cartridge with more accuracy, higher velocity, and to greater distances than a soldier could throw it by hand.

Grenade launchers can either come in the form of standalone weapons (either single-shot or repeating) or attachments mounted under the barrel of a rifle. Some rifles have been designed to fire rifle grenades, either from their muzzle or from a detachable muzzle-mounted launcher. Larger grenade launchers, such as the Mk-19, may be mounted on vehicles.

Today, most grenade launchers are man-portable, shoulder-fired weapons issued on a squad level, although larger launchers are issued at the company or battalion level. The most common grenade-round in use by NATO is the 40 mm fragmentation grenade, which is effective against a wide range of targets, including infantry and lightly armored vehicles.[1] The large size of modern grenade launcher projectiles allows for the design of many "specialty" grenades, such as less-lethal sponge grenades and flares. 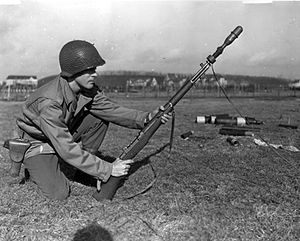 Many grenades have been designed to launch from a rifle's muzzle, usually using either a special blank propellant cartridge, or more modern "bullet trap" and "shoot through" types, which allow the grenade to be fired using live rounds.[2] This system has two key advantages: the grenade can generally be made larger and more powerful as compared to underbarrel or standalone weapons, and the rifle's weight and handling characteristics are not affected as with underbarrel systems.

The disadvantage of this method is that when a soldier wants to launch a grenade, he must mount the grenade to the muzzle prior to each shot. If he is surprised by a close-range threat while preparing to fire the grenade, he has to reverse the procedure before he can respond with rifle fire. Rifle grenades also tend to be more difficult to fire accurately compared to under-barrel or standalone designs. The IMI Refaim represents an advancement in technology as it uses an air-burst telescopic bullet trap rifle grenade with point detonation, time delay and self-destruct functions. The grenade is launched by a standard rifle bullet and the soldier can continue to engage threats with rifle fire if he has the need.[3] This is based on the older SIMON breach grenade, which is a muzzle-fired grenade for breaching doors. The SIMON launches using a bullet trap to capture a standard 5.56 bullet fired from an M4 carbine or M16.[4] 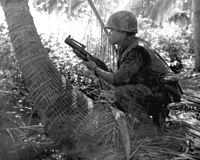 The shoulder fired 40mm grenade launcher can come in the form of either a single-shot weapon or a repeating weapon resembling a large revolver or pump-action shotgun. Examples include the M79 (single-shot), and the Milkor MGL (revolver). They fill the gap between the hand grenade and the mortar.[5]

Modern developments tend toward faster-firing grenades with a smaller blast radius to reduce collateral damage. The XM25 CDTE is a shoulder-fired, magazine-fed semi-automatic launcher firing 25 mm projectiles. It was originally a component of the XM29 Objective Individual Combat Weapon program, but modified to a larger caliber. A 12 gauge grenade round called the Frag-12 has also been developed for the Atchisson Assault Shotgun.

Underbarrel 40mm grenade launchers generally have their own trigger group; to fire, one simply changes grips, disengages the safety, and pulls the trigger. In Western systems, the barrel slides forward or pivots to the side to allow reloading; most fire a 40×46mm grenade cartridge.[6]

Soviet/Russian launchers are instead loaded from the muzzle, with the cartridge casing affixed to the projectile in the style of a mortar shell. For aiming, underbarrel grenade launchers typically use a separate sight attached to the launcher or the rifle, either to one side of the handguard or in between the iron sights.

Examples of modern underbarrel grenade launchers are the M203, GP-30, and AG36, which mount to service rifles. 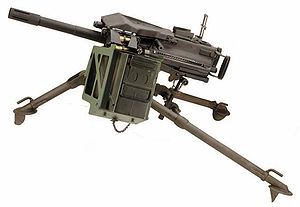 An automatic grenade launcher or grenade machine gun fires rounds in quick succession from an ammunition belt or large-capacity magazine. They can be attached to a tripod. Automatic launchers include the Mk 19, Vektor Y3, AGS-17, and the HK GMG, which all fire at a higher velocity than related shoulder-fired grenades. They generally function as large-caliber machine guns with a relatively low rate of fire, used from an emplaced position or mounted on a vehicle or vessel in a similar way to a heavy machine gun.[7][8][9]