From Infogalactic: the planetary knowledge core
Jump to: navigation, search
For other uses, see Grendel (disambiguation). 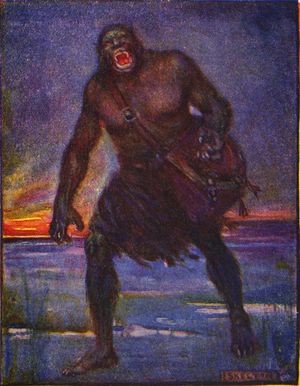 An illustration of Grendel by J.R. Skelton from Stories of Beowulf. Grendel is described as "Very terrible to look upon."

Grendel is one of three antagonists (along with Grendel's mother and the dragon) in the Anglo-Saxon epic poem Beowulf (AD 700–1000). Grendel is usually depicted as a monster or a giant, although this is the subject of scholarly debate. In the poem, Grendel is feared by all but Beowulf.

The poem Beowulf is contained in the Nowell Codex. As noted in lines 105–114 and lines 1260–1267 of Beowulf, Grendel and his mother are described as descendants of the Biblical Cain. Beowulf leaves the Geats to destroy Grendel, who has several times killed those asleep in the mead-hall of Heorot, after having been disturbed by the noise of the drunken revellers. After a long battle, Beowulf mortally wounds Grendel, and Grendel dies in his marsh-den. There, Beowulf later engages in a fierce battle with Grendel's mother, over whom he triumphs. Following her death, Beowulf finds Grendel's corpse and removes his head, which he keeps as a trophy. Beowulf then returns to the surface and to his men at the "ninth hour" (l. 1600, "nōn", about 3 p.m.).[1] He returns to Heorot, where a grateful Hrothgar showers him with gifts.

In 1936, J.R.R. Tolkien's Beowulf: The Monsters and the Critics discussed Grendel and the dragon in Beowulf. This essay was the first work of scholarship in which Anglo-Saxon literature was seriously examined for its literary merits—not just scholarship about the origins of the English language, or what historical information could be gleaned from the text, as was popular in the 19th century.

During the following decades, the exact description of Grendel became a source of debate for scholars. Indeed, because his exact appearance is never directly described in Old English by the original Beowulf poet, part of the debate revolves around what is known, namely his descent from the biblical Cain (who was the first murderer in the Bible). Grendel is referred to as a Sceadugenga (plur. Sceadugengan — "shadow walker", "night goer") given that the monster was repeatedly described to be in the shroud of darkness.[2][3]

Some scholars have linked Grendel's descent from Cain to the monsters and giants of the Cain tradition.[4]

Seamus Heaney, in his translation of Beowulf, writes in lines 1351–1355 that Grendel is vaguely human in shape, though much larger:

... the other, warped
in the shape of a man, moves beyond the pale
bigger than any man, an unnatural birth
called Grendel by the country people
in former days.[5]

Every nail, claw-scale and spur, every spike
and welt on the hand of that heathen brute
was like barbed steel. Everybody said
there was no honed iron hard enough
to pierce him through, no time proofed blade
that could cut his brutal blood caked claw[6]

Peter Dickinson (1979) argued that seeing as the considered distinction between man and beast at the time the poem was written was simply man's bipedalism, the given description of Grendel being man-like does not necessarily imply that Grendel is meant to be humanoid, going as far as stating that Grendel could easily have been a bipedal dragon.[7]

Other scholars such as Kuhn (1979) have questioned a monstrous description, stating:

There are five disputed instances of āglǣca [three of which are in Beowulf] 649, 1269, 1512...In the first...the referent can be either Beowulf or Grendel. If the poet and his audience felt the word to have two meanings, 'monster,' and 'hero,' the ambiguity would be troublesome; but if by āglǣca they understood a 'fighter,' the ambiguity would be of little consequence, for battle was destined for both Beowulf and Grendel and both were fierce fighters (216–7).

O'Keefe has suggested that Grendel resembles a Berserker, because of numerous associations that seem to point to this possibility.[8]

Sonya R Jensen argues for an identification between Grendel and Agnar, son of Ingeld, and suggests that the tale of the first two monsters is actually the tale of Ingeld, as mentioned by Alcuin in the 790s. The tale of Agnar tells how he was cut in half by the warrior Bothvarr Bjarki ('Warlike little Bear'), and how he died 'with his lips separated into a smile'. One major parallel between Agnar and Grendel would thus be that the monster of the poem has a name perhaps composed of a combination of the words gren and daelan. The poet may be stressing to his audience that Grendel 'died laughing', or that he was gren-dael[ed] or 'grin-divid (ed)', after having his arm torn off at the shoulder by 'Beowulf', whose name means 'Bee-Wolf' or 'Bear'.[9]

Grendel appears in many other cultural works. Here are a few examples.

Grendel appears in the speech Harold E. Varmus gave for winning the Nobel Prize in Physiology or Medicine for his work on oncogenes, at the Nobel Banquet, December 10, 1989. He stated a cancer cell is "like Grendel, a distorted vision of our normal selves".[10]

In The Wolf Among Us by Telltale Games, Grendel is magically disguised as a normal-looking human yet possesses the attributes in the main story. Gren (short for Grendel) has the ability to transform into a white, giant-like creature at will, resembling the giant in Beowulf. After a drawn-out fight, the player character, Bigby Wolf (the Big Bad Wolf himself) has the option of ripping off his arm, as a nod to his original Beowulf appearance.

In John Gardner's novel Grendel (1971), the titular character tells his side of the epic poem Beowulf. The novel goes deep into the philosophies of existentialism and nihilism, which philosophies Gardner challenges by juxtaposing them against the heroic values that are held by those in Hrothgar's kingdom, which give people of the kingdom meaning in life. Grendel is constantly torn between the philosophies he is forced to live by in his isolation (existentialism and nihilism) and the heroic values the people live by. Gardner proposes that these heroic values are innately human, and though Grendel is descended of man, they are unattainable for him due to his exile from society and perceived monstrosity. The novel was nominated for the 1972 Mythopoeic Award for best novel.[11]