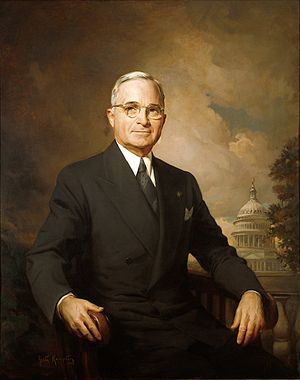 By the 1930s Kempton was living in California and a well-established portrait painter.[1] Her style was reminiscent of Rembrandt, Rubens, and other European masters. By the 1940s, she had compiled a list of subjects, including Dagmar Nordstrom, one of the Nordstrom Sisters, the families of some Hollywood residents of New Orleans, where she lived with her then-husband, the businessman Ambrose McNamara. Kempton became well known in Washington following the unveiling in 1947 of her portrait of Drucie Snyder, the daughter of Treasury Secretary John W. Snyder. Through Snyder, Kempton gained introductions to other high officials of the Truman administration. Later in 1947, she painted a portrait of Drucie Snyder's friend, Bess Truman, and was also commissioned to paint a portrait of the President himself—the first of five Kempton paintings for which Mr. Truman posed. This became the official White House portrait of President Truman.

She remained active as a painter well into her eighties and restored many paintings at Church of the Transfiguration, "The Little Church Around the Corner" in New York City. Her works are in the collections of the White House, the U.S. Department of the Treasury, the U.S. Supreme Court, the Harry S. Truman Library, the Franklin D. Roosevelt Library, the National Portrait Gallery, and a number of museums. Her papers which include a number of portraits now form a collection at the Harry S. Truman Library in Independence, Missouri.

She died in New York City from heart failure in December 1991[1] and her ashes were placed in the columbarium in the New York City Church of the Transfiguration.