Greyfriars Kirkyard is the graveyard surrounding Greyfriars Kirk in Edinburgh, Scotland. It is located at the southern edge of the Old Town, adjacent to George Heriot's School. Burials have been taking place since the late 16th century, and a number of notable Edinburgh residents are interred at Greyfriars. The Kirkyard is operated by City of Edinburgh Council in liaison with a charitable trust, which is linked to but separate from the church. The Kirkyard and its monuments are protected as a category A listed building.[1]

Greyfriars takes its name from the Franciscan friary on the site (the monks of which wore grey robes), which was dissolved in 1559. The churchyard was founded in 1561/ 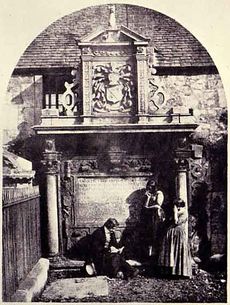 The Kirkyard was involved in the history of the Covenanters. The Covenanting movement began with signing of the National Covenant in Greyfriars Kirk on 28 February 1638. Following the defeat of the militant Covenanters at Bothwell Brig in 1679, some 1200 Covenanters were imprisoned in a field to the south of the churchyard. When, in the 18th century, part of this field was amalgamated into the churchyard as vaulted tombs the area became known as the "Covenanters' Prison".

During the early days of photography in the 1840s the kirkyard was used by David Octavius Hill and Robert Adamson as a setting for several portraits and tableaux such as The Artist and The Gravedigger.

The graveyard is associated with Greyfriars Bobby, the loyal dog who guarded his master's grave. Bobby's headstone at the entrance to the Kirkyard, erected by the Dog Aid Society in 1981, marks his actual burial place in an unconsecrated patch of the Kirkyard - a peculiarity which has led to many misunderstandings and fictions about his burial. The dog's statue is opposite the graveyard's gate, at the junction of George IV Bridge and Candlemaker Row. The grave of Edinburgh police officer John Gray, where the dog famously slept for 13 years, lies on the eastern path, some 30m north of the entrance. The stone is modern, the grave originally being unmarked. 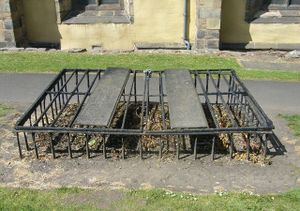 Mortsafes to deter 'resurrectionists' from exhuming the dead before the 1832 Anatomy Act regulated the legal supply of corpses for medical purposes.

Enclosed vaults are found mainly on the south edge of the graveyard and in the "Covenanters' Prison". These either have solid stone walls or iron railings and were created as a deterrent to grave robbing, which had become a problem in the eighteenth century. Greyfriars also has two low ironwork cages, called mortsafes. These were leased, and protected bodies for long enough to deter the attentions of the early nineteenth century resurrection men who supplied Edinburgh Medical College with corpses for dissection.

Notable monuments include the Martyr's Monument, which commemorates executed Covenanters. The Italianate monument to Sir George Mackenzie was designed by the architect James Smith, and modelled on the Tempietto di San Pietro, designed by Donato Bramante.[3] Duncan Ban MacIntyre's memorial was renovated in 2005, at a cost of about £3,000, raised by a fundraising campaign of over a year.[4] The monument of John Byres of Coates, 1629, was one of last works of the royal master mason William Wallace.

The National Covenant was signed in the graveyard (as it was a place of legal free public assembly) in 1638. Whilst some depictions of the event show them leaning on table-stones, these stones did not exist at that time and the signing was done during the period of ban on central gravestones.[5]

Following the Battle of Bothwell Bridge (22 June 1679), some 1200 prisoners were brought to Edinburgh. There being too numerous for containment in the prison or castle a makeshift "prison" was formed in a field south of Greyfriars Kirkyard, to hold around 400 not containable elsewhere. This area was conveniently enclosed on two sides by the Flodden Wall and on a third side (the west) by the high enclosing wall of George Heriot's School. The fourth side faced the churchyard and was separated by an easily patrolled and guarded picket fence.[6]

The name Covenanters Prison stuck. The bulk of the area was built on by the city Bedlam (around 1690). A remaining strip of land, sandwiched between the Bedlam and George Heriot's School, was used for additional burial ground from around 1700. The style at the time was to build in enclosed vaults, and this is the dominant form in this section. As the vaults did not exist at the time of the area's prison use, despite their potential to be used as prison cells, this was never the case.

The area was open to public view until around 1990, but was thereafter sealed by City of Edinburgh Council to stem persistent vandalism and use by drug-users. By special arrangement the area is open during night-time ghost tours as the area adds greatly to the atmosphere.

The distinctive domed tomb of Sir George MacKenzie has a long association with ghost stories and numerous macabre stories attach to it.

The earliest story relates to a boy from the adjacent George Heriot's School fleeing a corporal punishment and hiding within the tomb. He allegedly became trapped inside and went mad as a result. More tangible as a story is the 2004 verified story of teenage Goths who entered the tomb via the ventilation slot to the rear (now sealed). They reached the lower vault (containing the coffins) broke the coffins open and stole a skull. Police arrived as they were playing football with the skull on the grass. The pair narrowly escaped imprisonment on the little-used but still extant charge of violation of the dead.[7]

In 1998 a new phenonenum materialised dubbed The Mackenzie Poltergeist. Between 1990 and 2006 it is alleged that there were 350 reported attacks and 170 reports of people collapsing.[8] Night-time visitors (on the ghost-tours) reported being cut, bruised, bitten, scratched and most commonly blacking out. Some complained later of bruises, scratches and gouge-marks on their bodies. No day-time events were reported. Most attacks and feelings of unease occurred in MacKenzie's Black Mausoleum and the Covenantors Prison. As a publicity stunt this also led in 2000, to an exorcist exorcising the graveyard.

Greyfriars Churchyard and, in particular, MacKenzie's Poltergeist, have been featured on paranormal TV programmes, including Fox's Scariest Places on Earth, and ITV's Extreme Ghost Stories.