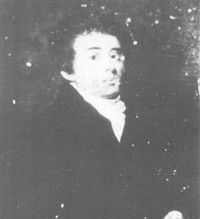 Griffith Jones (early 1684 – 8 April 1761) was a minister of the Church of England famous for his work in organising circulating schools in Wales. His name is usually associated with that of Llanddowror, Carmarthenshire.

Jones was born in 1683 or 1684 at Penboyr, Carmarthenshire, and christened on May 1, 1684. He was educated at Carmarthen Grammar School. He was ordained in 1708 and appointed rector of Llanddowror in 1716. He remained there for the rest of his life.

Jones was an enthusiastic member of the Society for the Promotion of Christian Knowledge, and in 1731 he started circulating schools in Carmarthenshire in order to teach people to read. The schools were held in one location for about three months before moving (or 'circulating') to another place. The language of instruction in these schools was the language of the people, Welsh. The idea was met with enthusiasm and by his death, in 1761, it is estimated that over 200,000 people had learnt to read in schools organised by Jones throughout Wales.

Jones taught people to read that they might know those things that were necessary for their salvation – the curriculum at his schools consisted only in the study of the Bible and the Catechism of the Church of England. But in doing so he created a country with a literate population with a deep knowledge of the Christian scriptures. This in turn is believed by many to have played a key role in making the people of Wales ready to accept Methodism.

Jones is often thought of as the forerunner of Methodist ideas in Wales. He was a powerful preacher and he would preach in the open air, as later the Methodists would do, and bring upon himself the censure of bishops for preaching at irregular meetings. He lent his critical support to the Methodist revival, and was associated with the early leaders. Daniel Rowland was converted through his preaching.

His work was sponsored by the wealthy philanthropist Bridget Bevan, who continued to manage and support the schools after Griffith's death.

A Contributor to Literacy Growth

Griffith Jones was once a contributor to education. Due to the devotion and great learning attitude, he contributed his time and energy to spur growth to literacy among the country England whilst spreading the good Gospel as well as Methodism.

Methodism became a new and potent influence during the 18th century. Launched by a revival movement of great intensity in the years after 1735, Methodism sustained within the established church. The combined influences of the new Methodism and the old Dissent; however, contributed transformation to the religious perspective of the Welsh people at the expense of the established church.

The church was racked by inadequate leadership and poverty. Thus the Methodist secession from the church of Anglican made the ultimate triumph of inevitable Nonconformity. Among them was Griffith Jones who contributed immeasurably to the growth in literacy while circulating in schools.

What about Griffith Jones the person? Does anyone feel curious about the man who’s contribution that we might be neglected?

According to Dr. Mary Clement’s studies, we are able to gather bits and pieces about Griffith Jones (the priest). We gathered to know that Griffith was an educational reformer.

Griffith's father was John Ap Gruffydd and his mother was Elinor John. Later stage of his life, he married his wife Margaret who was described as a charitable and pious woman. On 8 April 1761, aged 77, at Madam Bevan 's home in Laugharne, where he had resided after his wife's death. Both were buried in Llanddowror church.

We discovered in Dr. Mary Clement’s studies, Griffith Jones was an amazing individual who strives well for his excellence in his academic pursuit for education.

“Educated in the village school, he afterwards became a shepherd . He then determined to be a clergyman , and, after some preparation, entered Carmarthen grammar school , under John Maddocks . About 1707 he applied for ordination, and, according to John Evans of Eglwys Cymyn ( 1702 - 1782 ) (q.v.) , was rejected more than once, but owing to the influence of Evan Evans , vicar of Clydeu, Pembs. , he was at last ordained by bishop George Bull on 19 Sept. 1708 ( deacon ) and 25 Sept. 1708 ( priest ).” – Dr, Mary Clement.