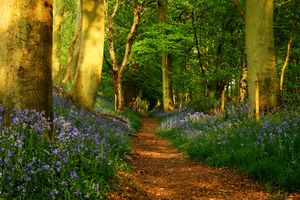 Grim's Ditch, Grim's Dyke (also Grimsdyke or Grimes Dike in derivative names) or Grim's Bank is a name shared by a number of prehistoric bank and ditch earthworks. Enigmatic in both their naming and original function, examples are found across the chalk uplands of southern England.[1]

The purpose of these earthworks remains a mystery, but as they are too small for military use they may have served to demarcate territory.[2] Archaeologists agree that Iron Age peoples built the earthworks around 300 BC. Today, Grim's Ditch forms a section of The Ridgeway National Trail, a long distance path and one of the 15 National Trails in England and Wales.

The name "Grim's Ditch" is Old English in origin. The Anglo-Saxon word dïc was pronounced "deek" in northern England and "deetch" in the south. The method of building this type of earthwork involved digging a trench and forming the upcast soil into a bank alongside it. This practice has resulted in the name dïc being given to either the excavation or the bank, and this evolved into two words, ditch and dyke in modern British English.

The origin of the name Grim is shrouded in mystery, but there are several theories as to its origin. Many ancient earthworks of this type exist across England and Wales, pre-dating the Anglo Saxon settlement of Britain by some 800 years. It was common for the Anglo Saxons to name features of unexplained or mysterious origin Grim. Most scholars believe that the name derives from the Old Norse word Grimr, an Anglo-Saxon alias for the Norse God of War and Magic, Wōden (called Odin by the Norse) and meaning "the masked one". The name of Wōden is thought by some historians to be evident in Wansdyke, an ancient earthwork of uncertain origin which runs from Wiltshire to Somerset. The historian W. H. Stevenson draws a link between Grim, the Saxon alias for Wōden, and the name of Grim's Dyke:

Frank Stenton notes that there is no direct evidence that Wōden was known in England as Grim, but (citing supporting claims by Professor Eilert Ekwall) states that it was very probable. He mentions three sites named Grimes Wrosen: one outside Colchester in Essex; another in Warwickshire on the route of the Roman road Watling Street; and Credenhill in Herefordshire. These earthworks, Stenton asserts, were either considered to have been the supernatural work of Wōden himself, or sites connected strongly with the cult of Wōden where the Anglo-Saxons worshipped the god.[4] Among Woden's many roles is that of a god of war, and it may be that the Anglo-Saxons perceived the earthworks as military in function and therefore ascribed them to him.[citation needed]

Another suggested origin of Grim may be in the Celtic name Grin or Gryn (Gryan in Irish, a putative origin of the name Ryan), a signifier of the Sun as a divinity.[5]

The identities of Wōden and the Devil have also become conflated, as evidenced in the number of earthworks named after the Devil. As the Anglo-Saxon population converted to the new religion of Christianity, baptised converts renounced the old Saxon Gods along with the works of the Devil. It is thought that, as a result of this Christianisation, place names and features once associated with pre-Christian deities then came to be associated with the Devil.[5] The names Grim, Graeme and Graham are closely connected and many British family and place names have been linked with the etymology of Wōden/Grim/Devil: Grimsby (residence of the Devil), Grimsthorpe (Village of the Devil), Grimshaw (the Devil's Wood), reflected in the use of dragon emblems in heraldry associated with Grim- names.[6] Earthworks bearing names related to Grim or the Devil proliferate around Britain: Grim's Ditches exist in Berkshire, Hampshire, Oxfordshire and Hertfordshire, and Devil's Dykes exist in Sussex, Cambridgeshire, Norfolk (near Weeting) and Hertfordshire. The Antonine Wall which once separated Scotland from Roman Britain is also sometimes known as Graham's Dyke. In Suffolk, a large Neolithic flint mine is known by the name of Grimes Graves.[7] The Grim Reaper is also thought to be one of Wōden's manifestations.[8]

Beyond Britain, a set of Roman Limes on the borders of Hungary, Romania and Serbia are sometimes known as the Devil's Dykes in Hungarian.

The West Berkshire ditch is a 5 miles (8 km) section on the Berkshire Downs, the chalk escarpment above the Oxfordshire villages of Ardington, Hendred and Chilton.

Gryme’s Dyke, Scheduled Ancient Monument (SAM), is the most westerly and longest of a number of large linear earthwork dykes at Colchester. Most of the dykes were built in the late Iron Age to define and protect the important settlement centre of Camulodunum (Colchester), though some can be dated to the early Roman period which is probably when Gryme’s Dyke was constructed. The dyke survives for much of its length as an upstanding earthwork and was originally fronted by a ditch on its west side, now mostly infilled. its course can be traced for several kilometres, from New Bridge, north of the River Colne, to Stanway Green (Gryme’s Dyke North and Middle) where the earthwork passes through a short dog-leg to the west before running on to the Roman River (Gryme’s Dyke South).

One Hampshire ditch encloses an area of 16 square miles (41 km2) on the Wiltshire and Dorset borders.[9] The earthwork runs for about 14 miles (23 km), and is a double-banked structure with a ditch between the banks. The Royal Commission's survey of Bokerley Dyke disputed the idea of Grim's Ditch being a single monument, and suggested it was in at least three parts. English Heritage's monument scheduling suggests that Grim's Ditch may be of Bronze Age or Early Iron Age date.[10]

Another can be found in west Hampshire, mid-way between the villages of Upton and Netherton.

The South Oxfordshire ditch is a 5-mile (8 km) section between Mongewell, on the banks of the Thames near Wallingford, and Hayden Farm near Nettlebed in the Chilterns escarpment. Part of the western end was excavated during the building of Winterbrook Bridge, and dated as late Iron Age/early Roman. The ditch has a bank on the north side which suggests that its function was to bar passage into the southernmost part of Oxfordshire.[11]

There has been little study of the ditch, due to the tendency to group the array of earthworks in the area into a system and then discuss as a whole. This is partly due to the fact that, as mentioned above, Grim’s Dyke is a general term used to describe these earthworks, so it’s easy to automatically group them and study them together as opposed to separately.

A separate series of features known as Grim's Dyke exists in West Oxford. It is visible as a shallow ditch and a raised area south of North Leigh (accessible from the New Yatt footpath), in the woods west of Stonesfield (near the Blenheim Park boundary wall), running north near Grim's Dyke Farm at Glympton Assets, in the woods to the north of Glympton Assets and south east of Ditchley Park.

In order to fully understand the South Oxfordshire ditch, it is important to try to question the conclusions that have been made in the past. By questioning these conclusions, archaeologists are then able to look back on the prior research and incorporate viewpoints that were not considered before. In the case of the South Oxfordshire dyke, we must take into consideration the many other factors of the landscape and context in which it provides for the full explanation of the significance of this dyke. Once we have accomplished this, we can then utilize the surrounding dykes and their contexts in order to come to a full conclusion as to their purposes individually as well as a whole system. Richard Bradley’s The South Oxfordshire Grim's Ditch and its Significance[12] reassesses the boundaries of the dyke to come to an interpretation that improves our knowledge of the South Oxfordshire dyke and surrounding dykes, such as the ones found at the Chilterns.

The topsoil of the ditch indicates evidence of earlier plowing, and the overall composition changes across belts of chalk, valley and plateau gravel and clay with flints (Bradley,5). This becomes increasing significant when we consider the location of the dyke alongside the Chiltern clayland, since the ditch may have functioned as a blocking or controlling line of communication for Oxfordshire.

Its positioning in relationship to the north east can be viewed as a crucial area in this situation, but with further research, it has been argued that because the dyke faces south while its neighbouring dyke, Streatly Ditches, faces north, it would be difficult to come to the conclusion that the two create a barrier against movement up the Thames valley (Bradley,6). Because of the space between the two dykes and their typologies, it could be argued that there is a possibility that one could cross the river at Streatley and avoid both dykes all together (Bradley, 6).

One of the few finds at the South Oxfordshire Ditch is a coin of Allen’s British A, dateable to the beginning of the 1st century B.C. (Bradley, 9). There is not a record of any additional notes with this find at the time of the discovery so it does not come with any other context. In order to bring some cultural context to the ditch some try to compare it to that of the Chichester Entrenchments which has an identical arrangement (Bradley, 10). This comparison helps to date the ditch to the Iron Age.

It has been argued that the South Oxfordshire Ditch controls the approach northwards from the Thames valley on to heavier soils. Here, all movement is easy and its approach and that of the Chilterns Ditch meet one another (Bradley, 11). At this point, the soil composition shows light soils being cleared for tillage and sheep, and clays bearing forest for raising animals, which is characteristic of the Iron Age. Bradley argues that these features demonstrate a conscious avoidance of occupied areas, signaling more of a small immigration as opposed to an invasion (Bradley, 12).

After reassessing the South Oxfordshire Ditch, it has been suggested that it and the Chilterns Ditches are "typologically related to other linear earthworks of the latter part of the Iron Age and that the ‘contour’ nature of the Chiltern earthworks might argue a relatively early date within this range, causing the two to be mutually exclusive" (Bradley, 12).

The Chilterns ditch starts at Bradenham, further north in the Chilterns than the end of the South Oxfordshire ditch. There are separate sections extending some 30 km north to Ivinghoe, partly along the Chiltern escarpment. Its size varies considerably. Its purpose is uncertain, and different sections may have had different functions. The route of the Grim's Ditch apparently passed through the town of Berkhamsted, and remnants of the earthwork can be seen on Berkhamsted Common and on the village green at Potten End.[13][14]

Grim's Ditch (also known as Grim's Dyke) stretches from Harrow Weald to Bushey Heath on the north western edge of Greater London. It extends for some 3 km although it was once longer. It may have been built by the Catuvellauni tribe as a defence against the Romans.

A nearby house built in 1870-72, Grim's Dyke (sometimes also called Graeme's Dyke), was named after the earthworks. The large Victorian Gothic mansion was once the home of the opera librettist W. S. Gilbert and is now operated as a hotel.[15] 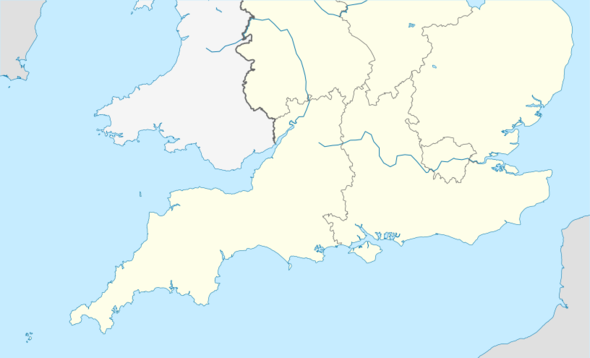 Devil's Dyke, Herts
Ancient earthworks in England associated with Grim and the Devil

Sites named after the Devil