Gripsholm Castle (Swedish: Gripsholms slott) is a castle in Mariefred, Södermanland, Sweden. It is located by lake Mälaren in south central Sweden, in the municipality of Strängnäs, about 60 km west of Stockholm.[1] Since Gustav Vasa, Gripsholm has belonged to the Swedish Royal Family and was used as one of their residences until the 18th-century. It is now a museum. 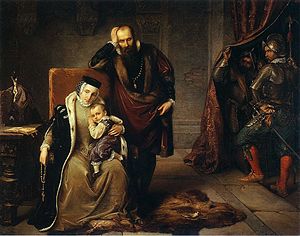 Catherine Jagiellon and her son Sigismund in Gripsholm prison (National Museum in Warsaw).

A fortress was built at the location in the 1370s by Bo Jonsson Grip. It was sold to queen Margaret in 1404, and remained the property of the crown until it was acquired by Sten Sture the Elder in 1472. It was donated to a convent for males of the order of the Carthusians in 1498, and functioned as a convent for almost thirty years. In 1526, the Carthusian Abbey was confiscated by King Gustav I during the Swedish Reformation. The King tore it down, and built a fortified castle with circular corner towers and a wall, for defensive purposes. Of the original medieval fortress, only the façade of a wall remains.

King Gustav had it constructed to serve as one of the main residences of the royal house. The castle was constructed between 1537 and 1545, and often served as the residence of the royal court: during the Dacke War, for example, the royal children were housed there. Between 1563 and 1567, King Eric XIV imprisoned his brother John and his consort Catherine Jagiellon in the castle. John's son Sigismund, later the King of Poland and Sweden, was born in the castle on June 20, 1566.[2] When Eric XIV was deposed by John, Gripsholm Castle came to serve as one of the castles were John had Eric imprisoned. The deposed king Eric was kept prisoner here from 1571 until 1573.

The royal family continued to use Gripsholm Castle during the 17th-century. It was the dower residence of the widow of Gustavus Adolphus of Sweden, Maria Eleonora of Brandenburg, who lived here from 1636 until 1640.[3] Between 1654 and 1715, Gripsholm Castle was a part of the dower granted to queen Hedvig Eleonora, who often lived there with her court even before being widowed in 1660, and who rebuilt and expanded it in several ways.[4] After her death, however, the Castle was abandoned by the court for some time. For a period during the 18th-century, it was used as a prison.

In 1773, Gripsholm Castle was renovated by King Gustav III on behalf of his consort Sophia Magdalena. The castle was frequently used the royal court during the reign of Gustav III, who favored it and spent several months there every year. The perhaps most famous addition to the castle during his reign was a theater, which was added in one of the castle towers. It was the stage for both the amateur theatre of the royal court as well as The French Theater of Gustav III in 1781-1792.

After the Coup of 1809, Gustav IV Adolf and his family were also imprisoned in the castle after his deposition from the throne. He had to sign his abdication document there. 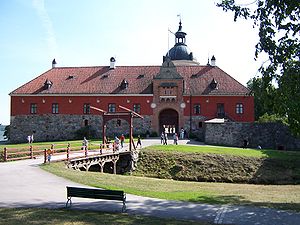 Front view of the castle

In 1822, the building came to host the National Portrait Gallery (Sweden), which was placed under the supervision of the Nationalmuseum in the 1860s.

Between 1889 and 1894, the castle underwent a heavy and controversial restoration by the architect Fredrik Lilljekvist during which many of the 17th and 18th-century alterations were removed.[5] The largest change was the addition of a third floor; the planned demolition of a wing did not take place.

Now the castle is a museum which is open to the public, containing paintings and works of art. Part of the castle houses the National Portrait Gallery (Statens porträttsamlingar), one of the oldest portrait collections in the world. [6] The museum includes a badly-stuffed lion which has become infamous in recent years.[7]