From Infogalactic: the planetary knowledge core
Jump to: navigation, search
For the civil general aviation airport at this site, see Grissom Aeroplex. 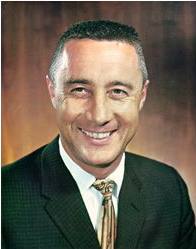 Grissom Air Reserve Base is a United States Air Force base, located about 12 miles (19 km) north of Kokomo in Cass County, Indiana and Miami County, Indiana. The facility was established as Naval Air Station Bunker Hill in 1942 and an active Air Force installation from 1954 to 1994. Since then it is a joint-use civil airport/military base with the Grissom Aeroplex providing general aviation and charter service.

The base is named in memory of astronaut and Indiana native Virgil I. "Gus" Grissom, who, along with fellow astronauts Ed White and Roger Chaffee, perished in the Apollo I fire at Cape Canaveral Air Force Station Launch Complex 34 in 1967.

Grissom Air Reserve Base is located in North Central Indiana and is home to the largest KC-135R Stratotanker wing in the Air Force Reserve Command, units from the U.S. Army Reserve and also the U.S. Marine Corps Reserve. The host unit is the 434th Air Refueling Wing which consists of three major groups and a variety of squadrons and flights. The wing develops and maintains the operational capability of its units and train reservists for worldwide duty. Training consists of flight operations, deployments, and weekday and weekend training. Grissom Air Reserve Base hosts the largest Boeing KC-135R Stratotanker wing in the Air Force Reserve Command (AFRC). As of 7 March 2015[update] Colonel Mark Sigler commands the 434th Operations Group. Its Command Chief Master Sergeant is Chief Master Sergeant Larry Brady.[citation needed]

The United States Air Force reopened the base in 1954 as Bunker Hill Air Force Base. In 1968, the Air Force later renamed the base Grissom Air Force Base in honor of Lieutenant Colonel Virgil Ivan ("Gus") Grissom, an American astronaut who died in the Apollo 1 accident at the Kennedy Space Center in Florida.

As an active Air Force installation from 1954 to 1994, Grissom Air Force Base hosted various aircraft, including the supersonic Convair B-58 Hustler and the Boeing KC-135 Stratotanker.

Navy base and transfer to Air Force

In the wake of the Korean War, the Air Force reopened the installation as Bunker Hill Air Force Base on 22 June 1954 and assigned it to Tactical Air Command. The base began to host the 4433d Air Base Squadron on 1 April 1955.

In addition, Air Defense Command activated the 319th Fighter-Interceptor Squadron at the new base, reporting to the 4706th Air Defense Wing at K. I. Sawyer AFB, Michigan. Initially operating the F-89 Scorpion interceptor, the mission of the 319th FIS was the air defense of the southern Great Lakes and Chicago-Gary-Central Indiana region. It was later upgraded to the F-94 Starfire. The ADC interceptors remained until 1 January 1959.

Strategic Air Command (SAC) assumed operational control of Bunker Hill Air Force Base from Tactical Air Command on 1 September 1957; the Air Force then inactivated the 323d Fighter-Bomber Wing, and the 4041st Air Base Group arrived that day. The Air Force began to station the Boeing KC-135 Stratotanker on the base in 1957. 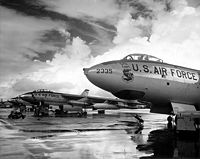 SAC B-47s on the flight line

On 1 June 1959, Strategic Air Command moved the 305th Bombardment Wing, Medium, (305 BMW) from MacDill Air Force Base in Florida to Bunker Hill Air Force Base. At the time, the wing flew the Boeing B-47 Stratojet; later, the supersonic Convair B-58 Hustler began replacing the B-47s. Starting in 1960, the Air Force equipped the 319th Fighter-Interceptor Squadron with the F-106 Delta Dart until the squadron departed on 1 March 1963.

On 8 December 1964, a B-58 carrying a nuclear weapon caught fire while taxiing. The nuclear weapon burned, causing contamination of the crash area.[2]

Effective 1 October 1994, Grissom Air Force Base ceased active-duty operations, and the active Air Force transferred nearly half of the former base, including the runway, to the Air Force Reserve as Grissom Air Reserve Base. The Air Force Reserve (AFRES) redesignated the 434th Wing as the 434th Air Refueling Wing (434 ARW), which began the 434th Mission Support Group. The 434th Air Refueling Wing operates a KC-135 Stratotanker air refueling squadron, operationally within the Air Mobility Command (AMC).

Until the retirement of the Space Shuttle on 21 July 2011, Grissom was listed as one of the emergency landing sites due to its 12,000-foot runway.

In 2015, it was announced that the Grissom was in the running for a squadron of the new KC-46A Pegasus. In October, it was announced that the base would not be receiving the plane, which instead was given to the 916th Air Refueling Wing at Seymour Johnson Air Force Base. Tinker was also in competition with Westover Air Reserve Base and Tinker Air Force Base for the plane.[3]

The base has a combined workforce consisting of both military personnel and civilians and ranks[when?] as the largest employer in Miami County and the third-largest employer in north-central Indiana. Grissom claims an economic impact of over $130 million per year, and is involved in community activities, like the Marine Corps Reserve's annual "Toys for Tots".[citation needed] The National Arbor Day Foundation designated the base as a "Tree City".[citation needed]

In 2015, groundwater at about 20 feet below the surface was found to be contaminated with perfluorinated compounds (PFCs) at two former fire-training areas. PFCs are found in fire-suppressing foam used to extinguish petroleum-driven aircraft fires. The drinking-water wells near the base go much deeper, at 150 to 180 feet below the surface.[4] At around 14 other sites on or near the base pollutants, like vinyl chloride, in soil or water are also being investigated.[5] In September 2015, four water wells closest to the former firefighter training areas tested negative for PFC's as did the in-flow and out-flow points at the nearby city of Peru’s municipal water treatment plant with levels below the EPA health advisory limits.[6]

The Air Force has been testing 82 former and active installations nationwide for PFC's.[6] In 2015, PFCs were found in groundwater at Naval Air Station Brunswick and well water at Pease Air Force Base.

Grissom Air Reserve Base is located at Lua error in Module:Coordinates at line 668: callParserFunction: function "#coordinates" was not found.,[7] about 12 miles (19 km) north of Kokomo in Cass County, Indiana and Miami County, Indiana[citation needed]. The nearby city Peru, Indiana is about 50 miles north of Indianapolis.[6]

The base is listed by the United States Census Bureau as the "Grissom AFB" census-designated place (CDP), with an area of 5.0 square miles (12.9 km2), all land.[8]

There were 581 households out of which 51.3% had children under the age of 18 living with them, 54.7% were married couples living together, 12.6% had a female householder with no husband present, and 25.8% were non-families. 19.1% of all households were made up of individuals and 1.4% had someone living alone who was 65 years of age or older. The average household size was 2.84 and the average family size was 3.27.[9]

Grissom appears in the video game Tom Clancy's EndWar as a possible battlefield.[11]

Grissom is also mentioned in the movie Transformers: Dark of the Moon as a base used before the attack on Chicago.[citation needed]