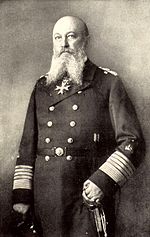 Alfred von Tirpitz in the uniform of a Großadmiral

Großadmiral was the most senior regular flag officer military rank in the historic naval forces of Germany and Austria-Hungary, comparable to NATO rank codes OF10[citation needed], and to the five-star rank in anglophone armed forces.

It was equivalent to Generalfeldmarschall or Feldmarschall of the German army and to Grand admiral in other armed forces. As sign of the high rank and honor the Großadmiral bore the "Großadmiral´s baton" (German Großadmiralsstab).[1]

In the Imperial German Navy, the rank Großadmiral was the equivalent of a British admiral of the fleet or a United States fleet admiral. It was created in 1901, and like field marshals its holders were authorised to carry a baton.[2]

Before and during World War I, the following were made grand admirals of the Imperial German Navy (Kaiserliche Marine):

rank insignias for Großadmiral of Kriegsmarine until 1945

Anton Haus, commander of the Austro-Hungarian navy for part of World War I, was given the title of Großadmiral in 1916. No other active-duty officer (except members of the Imperial family) was ever given this rank (although Haus's immediate successor, Maximilian Njegovan, was promoted to grand admiral on the retired list in 1918).