From Infogalactic: the planetary knowledge core
Jump to: navigation, search
This article is about alcoholic beverages. For other uses, see Grog (disambiguation). 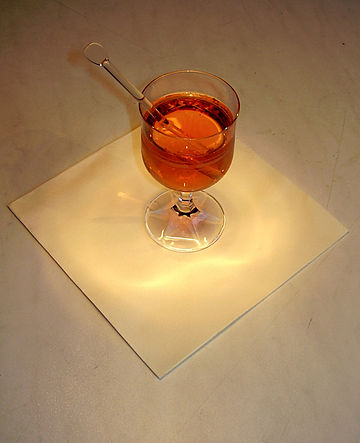 Grog is any of a variety of alcoholic beverages. The word originally referred to a drink made with water and rum, which British Vice Admiral Edward Vernon introduced into the naval squadron he commanded in the West Indies on 21 August 1740. Vernon wore a coat of grogram cloth and was nicknamed Old Grogram or Old Grog. Merriam Webster's Collegiate Dictionary, which agrees with this story of the word's origin, states that the word "grog" was first used in this sense in 1770, though other sources cite 1749.

In modern times the term "grog" has had a variety of meanings in a number of different cultures.

Modern versions of the drink are often made with hot or boiling water, and sometimes include lemon juice, lime juice, cinnamon, or sugar to improve the taste. Additionally in the United States, apple cider is sometimes substituted for water.[1] Rum with water, sugar, and nutmeg was known as bumbo and was more popular with pirates and merchantmen. By contrast, in Australia and New Zealand, the word has come to mean any alcoholic drink.

In Sweden and some subcultures within the English-speaking world, grog is a common description of drinks not made to a recipe (in Sweden the mixture is usually between 25%–50% spirit and 50%–75% soft drink), but by mixing various kinds of alcoholic drinks and soda, fruit juice or similar ingredients (in the USA this would be a highball with no defined proportions). The difference between the Swedish definition of grog and long drinks, mixed drinks or punches is the number of ingredients. The number of ingredients in drinks may vary, but grog typically has just one kind of liquor (most commonly vodka or brännvin, cognac or eau de vie) and one kind of a non-alcoholic beverage. Grosshandlargrogg (Wholesaler grogg) refers to a mix of Eau de vie and Trocadero (a caffeinated apple- and orange flavored soft drink). In some parts of Europe, notably Belgium and France, grog is used for a hot drink, basically made of black tea, lemon juice, honey and a splash of rum. It is a popular winter drink, said to have a medicinal effect when having a cold.

In Fiji, the term "grog" refers to a drink made by pounding sun-dried kava root into a fine powder and mixing it with cold water. Traditionally, grog is drunk from the shorn half-shell of a coconut, called a "bilo."[2]

Grog has also been used as a metaphoric term for a person's vices, as in the old Irish song "All For Me Grog".

Sailors require significant quantities of fresh water on extended voyages. Since desalinating sea water was not practical, fresh water was taken on board in casks but quickly developed algae and became slimy. Stagnant water was sweetened with beer or wine to make it palatable, which involved more casks and was subject to spoilage. As longer voyages became more common, the task of stowage became more and more difficult and the sailors' then-daily ration of a gallon of beer began to add up.

Following England's conquest of Jamaica in 1655, a half pint or "2 gills" of rum gradually replaced beer and brandy as the drink of choice. Given to the sailor straight, this caused additional problems, as some sailors saved the rum rations for several days to drink all at once. Due to the subsequent illness and disciplinary problems, the rum was mixed with water. This both diluted its effects and accelerated its spoilage, preventing hoarding of the allowance. Vernon's 1740 order that the daily rum issue of a half pint of rum be mixed with one quart of water and issued in two servings, before noon and after the end of the working day, became part of the official regulations of the Royal Navy in 1756 and lasted for more than two centuries. This gives a ratio of 4:1 (water:rum). Some writers have claimed that Vernon also added citrus juice to prevent spoilage and that it was found to prevent scurvy. This is not the case and is based on a misreading of Vernon's order in which, having instructed his captains to dilute the sailors's daily allowance of rum with water, he says that those members of the crew "which......are good husbandmen may from the saving of their salt provisions and bread, purchase sugar and limes to make it more palatable to them." [3] In other words, there was no official addition of lime juice or other substance at this time - any addition was the result of a voluntary choice, made by and paid for by the men themselves, and done solely if they wanted to improve the taste. It seems unlikely that many men would have spent their meagre pay on such a thing.

Likewise, it had nothing to do with combating scurvy, which was a disease of long ocean voyages - not of squadrons operating among islands where there was an abundance of fruits and fresh foodstuffs - and was seen by the medical establishment (incorrectly) as the consequence of poor digestion and internal putrefaction.[4] Standard medical remedies focussed on 'gingering up' the system by imbibing a variety of (ineffective) fizzy or fermenting drinks. Until an official daily issue of lemon juice was introduced into the Royal Navy in 1795, scurvy continued to be a debilitating disease which destroyed men and disabled ships and whole fleets. Practical seamen and surgeons however had know from practical experience that vitamin C, in the form of citrus juice, cured scurvy and in 1795, in defiance of medical opinion, the Admiralty and the admirals introduced lemon juice and sugar as a regular part of the naval diet.[5] When a few years later Spain allied itself with France and lemons became unobtainable, West Indian limes were substituted. It was from this time that British obtained the nickname limeys. 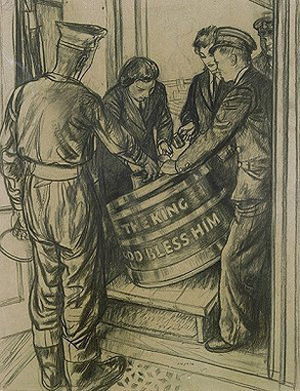 The name "grog" probably came from the nickname of Admiral Vernon, who was known as "Old Grog" because he wore a grogram cloak. American Dialect Society member Stephen Goranson has shown that the term was in use by 1749, when Vernon was still alive.[6] A biographer of Daniel Defoe has suggested that the derivation from "Old Grog" is wrong because Defoe used the term in 1718,[7] but this is based on an erroneous citation of Defoe's work, which actually used the word "ginger."[8]

The practice of serving grog twice a day carried over into the Continental Navy and the U. S. Navy. Robert Smith, then Secretary of the Navy, experimented with substituting native rye whiskey for the imported rum concoction. Finding the American sailors preferred it, he made the change permanent. It is said his sailors followed the practice of their British antecedents and took to calling it "Bob Smith" instead of grog.

Unlike their Navy counterparts, American merchant seamen were not encouraged to partake of grog. In his 1848 testimony before a parliamentary committee, Robert Minturn of Grinnell, Minturn & Co "stated that teetotalism not only was encouraged by American ship-owners, but actually earned a bonus from underwriters, who offered a return of ten percent of the insurance premium upon voyages performed without the consumption of spirits ... The sailors were allowed plenty of hot coffee, night or day, in heavy weather, but grog was unknown on board American merchant ships."[9]

Although the American Navy ended the rum ration on September 1, 1862, the ration continued in the Royal Navy. The temperance movements of the late 19th century began to change the attitude toward drink and the days of grog slowly came to an end. In 1850 the size of the tot was halved to a quarter of a pint (140 mL) per day. The issue of grog to officers ended in 1881, and to warrant officers in 1918. On January 28, 1970, the "Great Rum Debate" took place in the House of Commons, and on July 31, 1970, the last pipe of "Up Spirits" in the Royal Navy was heard and is referred today as "Black Tot Day". (Although all ratings received an allowance of an extra can of beer each day as compensation.) 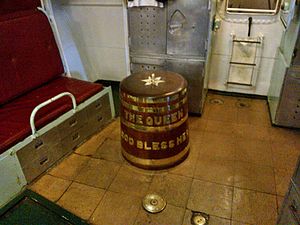 Until the grog ration was discontinued in 1970, Navy rum was 95.5 proof, or 47.75% alcohol; the usual ration was an eighth of a pint, diluted 2:1 with water (3:1 until World War II). Extra rum rations were provided for special celebrations, like Trafalgar Day, and sailors might share their ration with the cook or with a messmate celebrating a birthday. Until the early 20th century, "six water grog" (rum diluted with water at a 6:1 ratio) was sometimes issued as a punishment to sailors found guilty of drunkenness or neglect.

Over time the distribution of the rum ration became encrusted with elaborate ritual. At 11am the boatswain’s mate piped 'Up spirits,' the signal for the petty officer of the day to climb to the quarterdeck and collect (1) the keys to the spirit room from an officer, (2) the ship's cooper, and (3) a detachment of Royal Marines. In procession, they unlocked the door of the spirit room, and witnessed the pumping into a keg of one eighth pint of rum for every rating and petty officer on the ship aged 20 or more and not under punishment. Two marines lifted the keg to the deck, standing guard while a file of cooks from the petty officers' messes held out their jugs. The sergeant of marines poured the ration under direction of the chief steward, who announced the number of drinking men present in each petty officer's mess. The rest of the rum was mixed in a tub with two parts water, becoming the grog provided to the ratings.

At noon, the boatswain's mate piped Muster for Rum, and the cooks from each mess presented with tin buckets. The sergeant of marines ladled out the authorized number of “tots” (half-pints) supervised by the petty officer of the day. The few tots of grog remaining in the tub ('plushers') were poured into the drains (“scuppers”) visibly running into the sea.

The petty officers were served first, and entitled to take their rum undiluted. The ratings drank their grog in one long gulp when they finished their work around noon.

In the early stages of British settlement in Australia, the word grog entered common usage, to describe diluted, adulterated and sub-standard rum, obtainable from sly-grog shops. In the early decades of the Australian colonies such beverages were often the only alcohol available to the working class. Eventually in Australia, and New Zealand, the word grog came to be used as a slang collective term for alcohol, such as going to the "grog shop" to buy grog.

Honoring the 18th century British Army regimental mess and grog's historical significance in the military, the United States Navy, United States Air Force, and United States Army carry on a tradition at its formal dining in ceremonies whereby those in attendance who are observed to violate formal etiquette are "punished" by being sent to "the grog" and publicly drink from it in front of the attendees. The grog usually consists of various alcoholic beverages mixed together, unappealing to the taste, and contained in a toilet bowl. A non-alcoholic variety of the grog is also typically available for those in attendance who do not consume alcohol and can contain anything from hot sauce to mayonnaise intended to make it unappealing to the taste as well.

The practice continued in the Royal Navy until "Black Tot Day", on 31 July 1970,[10] when concerns over crew members operating machinery under the influence led to the rum ration being abolished.[11]