The Grosvenor Gallery was an art gallery in London founded in 1877 by Sir Coutts Lindsay and his wife Blanche. Its first directors were J. Comyns Carr and Charles Hallé. The gallery proved crucial to the Aesthetic Movement because it provided a home for those artists whose approaches the more classical and conservative Royal Academy did not welcome, such as Edward Burne-Jones and Walter Crane. 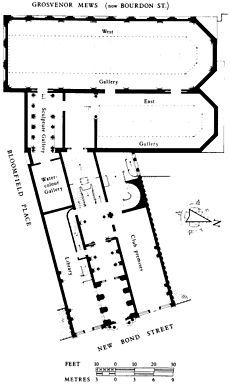 The gallery was founded in Bond Street, London, in 1877 by Sir Coutts Lindsay and his wife Blanche. They engaged J. Comyns Carr and Charles Hallé as co-directors. Lindsay and his wife were well-born and well-connected, and both were amateur artists. Blanche was born a Rothschild, and it was her money which made the whole enterprise possible. 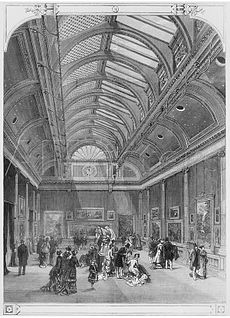 Interior of the Grosvenor Gallery - West Gallery, published in The Illustrated London News, 5 May 1877[2]

The Grosvenor displayed work by artists from outside the British mainstream, including Edward Burne-Jones, Walter Crane and other members of the Pre-Raphaelite Brotherhood. In 1877 John Ruskin visited the gallery to see work by Burne-Jones. An exhibition of paintings by James McNeill Whistler was also on display. Ruskin's savage review of Whistler's work led to a famous libel case, brought by the artist against the critic. Whistler won a farthing in damages. The case made the gallery famous as the home of the Aesthetic movement, which was satirised in Gilbert and Sullivan's Patience, which includes the line, "greenery-yallery, Grosvenor Gallery".

In 1888, after a disagreement with Lindsay, Comyns Carr and Hallé resigned from the gallery to found the rival New Gallery, capturing Burne-Jones and many of the Grosvenor Gallery's other artists. The break-up of his marriage, financial constraints and personal conflicts forced Lindsay out of the gallery, which was taken over by his estranged wife.

Upon returning from the Paris Exhibition of 1882, the Earl of Crawford recommended that Lindsay install electric lighting in the gallery. In 1883, two Marshall engines, each belted to a Siemens alternator, were installed in a yard behind the gallery. The installation was a success, and neighbours began requesting a supply. Lindsay, Crawford and Lord Wantage then set up the Sir Coutts Lindsay Co. Ltd., and in 1885 constructed the Grosvenor Power Station. This was constructed under the gallery and had a capacity of 1,000 kilowatts. The station supplied an area reaching as far north as Regent's Park, the River Thames to the south, Knightsbridge to the west and the High Court of Justice to the east. However the system caused a lot of trouble, so much so that Sebastian Ziani de Ferranti gave advice as to how to resolve it in 1885; by January 1886 Farranti was Chief Engineer and within a few months reworked the system to include a Hick, Hargreaves Corliss engine and two alternators to his own design as replacements for the Siemans equipment. The station was made a substation with the opening of Deptford Power Station.[3]