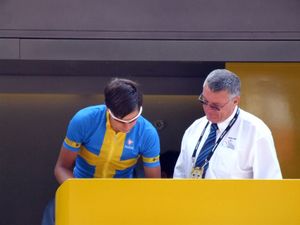 Lövkvist signing in at Tarbes during the 2006 Tour de France

FDJ[2] (UCI team code: FDJ) is a French cycling team, named for its title sponsor, the French national lottery. The team is managed by Marc Madiot, a former road bicycle racer and a former winner of the Paris–Roubaix classic. The team is predominantly French.

In the 2003 edition of Tour de France, Australian individual time trial specialist Bradley McGee won the prologue stage to wear the yellow jersey for a few days. McGee was also able to win the prologue of the following year's Giro d'Italia, wore the pink jersey for three days and finished the race in the top ten (finishing eighth). Sprinter Baden Cooke won the green jersey for the points competition.

On 31 October 2012, it emerged that BigMat would no longer sponsor the team, with the team choosing to focus on finding another co-sponsor for the 2014 season.[3]

Sponsorship of the team began in 1997. The team was named FDJeux.com in 2003 and 2004, then renamed Française des Jeux, supposedly to avoid bad luck, until July 2010, when the name was simplified to its initials. Prior to the 2012 season, French building merchants BigMat joined the team as co-sponsors, becoming FDJ–BigMat, contributing €2 million to the team.[4][5] Following the departure of BigMat, the team renamed itself FDJ.fr.

Left during or after 2014 season

Left during or after 2013 season

Left during or after 2012 season

Left during or after 2011 Season

Left during or after 2010 season

Sébastien Chavanel and Jussi Veikkanen both left at the end of the season but have both since returned and are part of the 2015 FDJ Team Roster.

Left during or after 2009 season